MillionHeir is a visual scavenger hunt with a little bit of humor, a fair amount of fun, and a healthy helping of replay value. 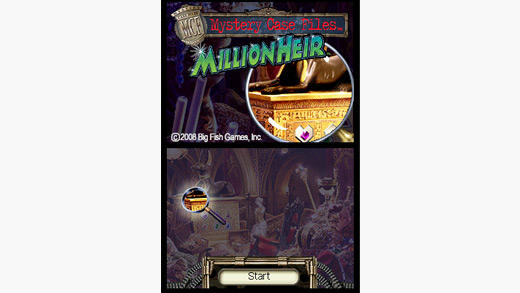 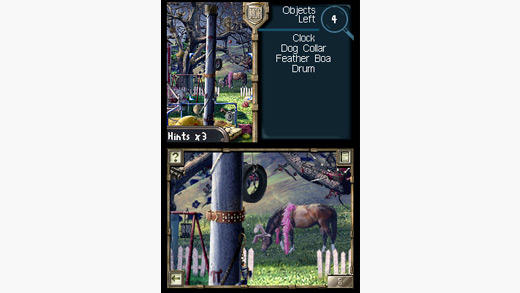 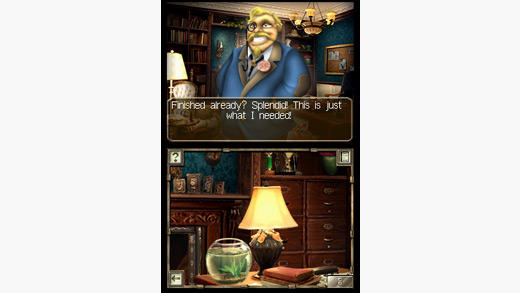 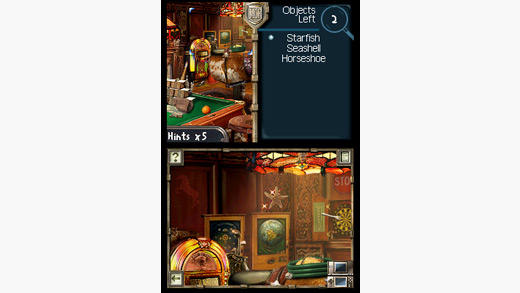 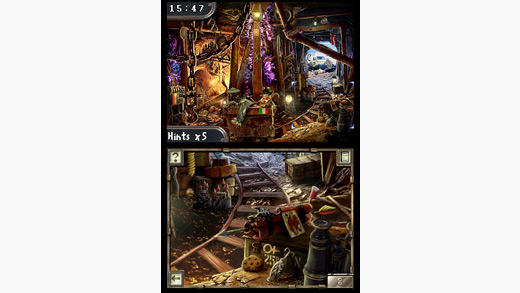 The "Mystery Case Files" games from Big Fish Games have been popular on the PC scene for some time. Not content to stay just on computers, Big Fish has partnered with Nintendo to bring a brand new entry to the series, "MillionHeir" to the DS.

Never having played any of the PC games, I can't really say how it compares to them. However, I can say that it is a very polished game on the DS, though there are still a few rough spots.

Story isn't all that necessary in a game like this, but MillionHeir manages to come up with a fairly straightforward story in which you investigate the disappearance of eccentric millionaire, Phil T. Rich.

The bulk of the game will be spent staring intently at your screen as you search extremely cluttered locations for "clues" that have been scattered about. I put clues in quotes because they really aren't anything that would ordinarily be considered clues, just a certain number of random objects in each location that the game's "crime computer" tells you to find. You'll be told to search for things like spoons, rolling pins, dinosaurs, coins, etc.

Of course, as with any good game, there's always a twist. Along the way, you'll pick up enhancements for your crime computer that will let you find objects in new ways. For example, an x-ray scope will let you see objects that were behind or inside of something else. The goggles will let you see items underwater. Every time you find a new tool, you'll be shown how to use it.

There's one more catch - not everything you're tasked with finding can simply be poked and collected. Sometimes the object itself is a puzzle that needs to be solved. As an example, one of the items you're supposed to find in a certain location is a pair of cut-off shorts, but there are no shorts in the picture. There is, however, a pair of pants, and when you cut off the legs, you have said shorts. This is an ingenious idea in theory, but it falls a bit short in practice, as you have to interact with the items in a particular way for the game to recognize what you're doing. This is only a mild complaint, as usually after a few tries you'll find out how the game wanted you to do it.

Another mild complaint about the game is that although the game is clearly directed towards kids, some of the items they ask you to find are not necessarily things kids might have seen before (or even some old farts like myself). Things like termites and earwigs come immediately to mind - people have HEARD of them, but may not have SEEN them, and so trying to find them is markedly more difficult.

Interestingly enough, the game sort of takes this into account by implementing a hint system. In each stage, you are given a certain number of hints that you can use which will show you the approximate location of a hidden item (On the easy difficulty, it will actually center the screen on the item). You're usually given about one hint for every 3 or 4 items you need to find, so it's best to only use them if you're really stuck (or when you're down to the last couple items and just want to finish quickly)

In between areas there are some other puzzles and minigames to solve, most of which are simple and straightforward, but provide a nice break from the constant searching. While some are entertaining, I didn't particularly care for the completely brain-free time wasters like polishing the badge, wiping up an ink spill, etc.

One thing I do like about the game is that, in grand "whodunit" style, the "who" that "dunit" is a different character each time. Unfortunately, you're never actually tasked with determining who the rapscallion is. You collect fingerprints from the suspects (again by searching for random oddities in various rooms) and then feed those into the crime computer. The computer then gives you the answer on who the villain is. It would have been nice to at least do a fingerprint comparison minigame (hey, they let you do it in Phoenix Wright!) or something that makes you feel a bit more involved with the actual solving of the case.

That's not to say the game doesn't suck you in - the music and ambient sounds of each area are quite appropriate, and most locations have a bit of animation going on with them as well (such as a model train running through the train room). Both those aspects really add to the scavenger hunt feel of the game.

There's also some multiplayer functionality in the game. There's a "hot seat" mode where you pass the DS around and each person tries to find a clue, then pass the DS to the next person before time runs out. There's also a "scavenger hunt" mode that allows people to search on several DS systems, but it's likely that everyone needs to own the game to play (oddly enough, there's no "download and play" or "multi-card play" icons on the back of the game case like with most multiplayer DS games).

The last thing I want to mention is the difficulty in the game. There are three difficulty levels (two initially and one unlockable). The easy difficulty gives you lots of hints and unlimited search time. The normal difficulty cuts down the number of hints, but still gives you ample time to search (usually 30 to 40 minutes for the longer stages). I don't think I ever used up more than half the time in any given stage when I played through, and I didn't use ANY hints.

The unlockable difficulty is absolutely brutal, though. On Gumshoe difficulty, you don't have a set time limit per stage, but you have only 30 seconds to find an item, and this timer resets with each one you find. With a limited number of hints, and many of the items being quite well hidden, this difficulty is far more frustrating than fun. Props to anyone who can beat the game on it though.

At any rate, there are far worse ways to blow $20 (such as Jake Hunter: Detective Chronicles). and if you're looking for something you can enjoy either when you have a couple hours to spare or just a few minutes to kill, Mystery Case Files: MillionHeir isn't a bad choice.
Review Page Hits: 0 today (401 total)
mediahook