Despite a few issues, Katamari Damacys beautiful layout, great soundtrack, and amazing innovation make it a game for the ages. 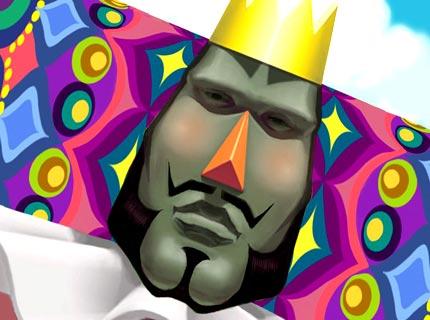 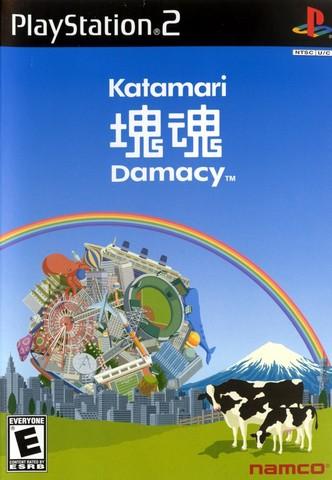 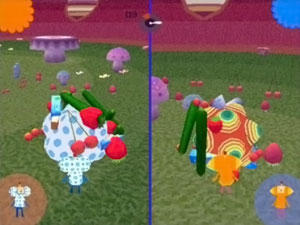 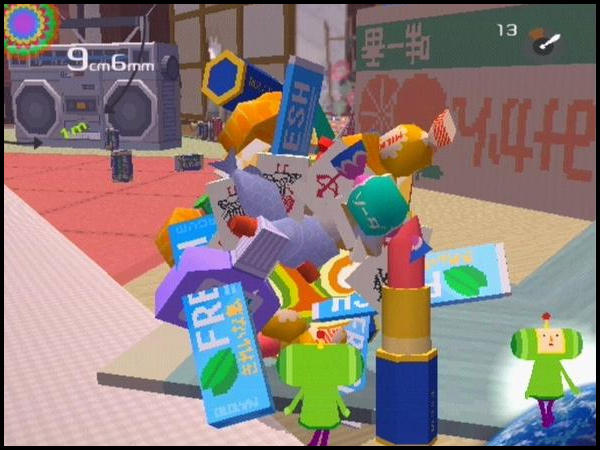 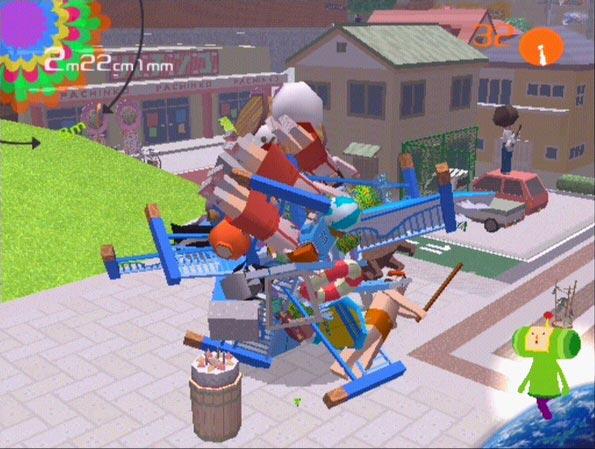 Before I get to my review, let me give you a little rundown of the story.

You are the prince of the universe, and your father is the King of all Cosmos. While drinking and partying up in the heavens, things got a bit crazy, and in his drunken stupor your father bumps into the stars and the Moon, destroying them. Now he sends you off to Earth, to roll up a bunch of stuff into a ball to create new stars (and eventually) the Moon.

Gameplay: In order to recreate the stars, you will be rolling around a large ball known as the Katamari. This "Katamari" acts as a super adhesive and will roll up anything smaller than itself. At first you will be rolling up small things such as thumbtacks but will eventually get to entire islands and cities. Each mission consists of you getting the Katamari to a certain size within a certain amount of time. Occasional side missions have you making new constellations where the objective is usually similar, but just a bit of a change of pace. You don't have to complete them, though. This style of gameplay has never been used in another video game before and is a wonderful new way to play. There is an oddly satisfying feeling as you hear the screams of the animals and people you are rolling up then looking at all the chaos you are creating. This is the aspect of the game that is amazing, because it does not get old quickly.

Sound: Sounds in the game are pretty basic, a little pop sound when you roll something up and the sound associated with that object, plus a bit of all things when in a higher populated area. But where the sound really shines is the great soundtrack. Each of the tracks are well put together, fitting, and are catchy and good to listen to.

Story: Another attractive aspect of Katamari Damacy is its quirky story. All of the characters and your "cousins" (other little people that look similar to you) are colorful and cute. Most of the story is in the category of "what the hell just happened?" which keeps it interesting and enjoyable. There are eight cut scenes that depict what is going on through the perspective of a family, which are weird and don't explain a ton, but are interesting nonetheless. The game also has many puns and humorous things that happen as you are rolling, many of which refer to Japanese culture.

Price: Katamari goes for about $20 so that will almost certainly make it worth your while.

Now it is time to go over the few problems I have with the game:

Graphics: What I am referring to here is the occasional camera issue due to the cameras position in relation to the Katamari. You play from a behind the Katamari view, so if you go in front of a large object, your view will be obscured. This typically happens only a couple of times, but it is really annoying and messes you up.

Controls: It's not the controls that are bad per say, but how they are executed. You control the Katamari by pushing it, using nothing but the left and right analog sticks. Since the ball is much larger than you, it can not turn on a dime since the prince needs time to turn it around etc. This can be a problem if you are trying to not fall of a cliff or stop from rolling down a hill, because you take a few seconds to reverse direction generally.

Length: Another problem like this description, the game is a bit to short. It can be completed virtually in one long sit down (3-5 hours). Once you have made all the stars and constellations, that's about it. This also ties in with the re-playability because there is so little to do once you have gotten through the game. There is little to nothing secret to find (besides one accessory for the prince in each level), and there is little incentive to play again unless you are a high score freak.

Difficulty: My last little gripe about Katamari Damacy is that it is just to easy. There is usually more than enough time to finish a level, as I beat every level on my first try, which is dumb in my opinion. I think the developers should have added more difficulty setting due to the low re-playability.

Conclusion: So in conclusion, despite it's minor flaws, Katamari Damacy is truly a masterpiece of a game that has to be at the very least rented by someone looking for another fun game to play. It's a steal at twenty bucks, and that's why it still gets an "A" from me. ROYAL RAINBOW!!!! (you will get this once you've played)
Review Page Hits: 0 today (821 total)
mediahook