The best Kirby game by a mile, and one of the finest platformers of all time. 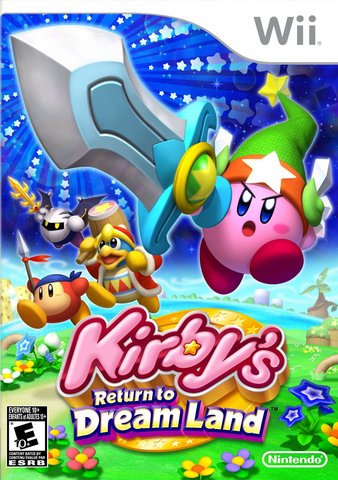 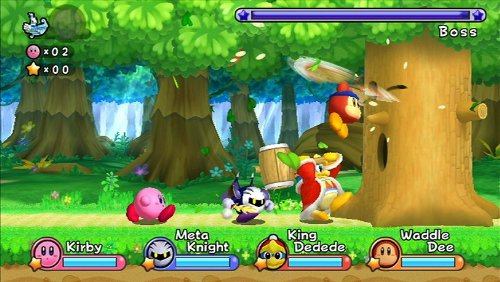 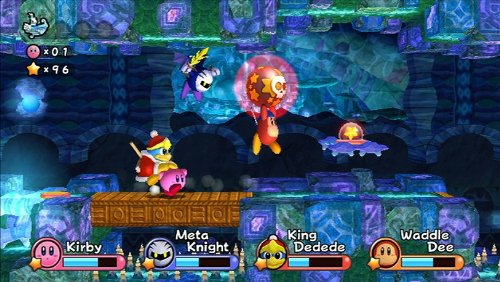 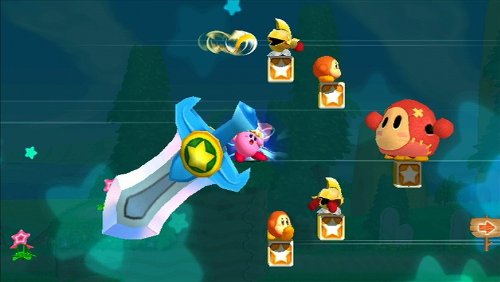 Much like Mario games, it seems like a new Kirby game is released every year or two. Some of them are a take on the traditional Kirby platformer formula and are always solid games, while others try something completely different, with mixed success. Kirby Mass Attack and Kirby's Pinball Land, for example, are both highly regarded. Kirby's Dream Course, and Kirby Air Ride, on the other hand, are decidedly less popular.

Kirby's Return to Dream Land falls squarely on the traditional Kirby game side of the fence, and what a game it is. With thirty-seven stages in the main game, seven challenge stages, two minigames, an arena mode, and even an extra difficult mode after clearing the game, Kirby is certainly not short on content. In terms of level design, Return to Dream Land strikes a great balance between playing it safe and trying new things - an approach that is sure to appeal to longtime Kirby fans and bring in potential new ones.

As is typical for modern platform games, the stages are separated into several groups (in this game they are called levels - usually they would be known as worlds or areas). Each of these groupings has a theme, and ends with a boss fight. Many of the platform staple themes show up - the lush, green hills and fields; deserts and ancient ruins; underwater exploration; the obligatory lava world, and so on. What makes these stages different from your average platformer is the other hallmark of the Kirby series - ever since the second game, Kirby has had the ability to eat his enemies and gain special powers called copy abilities. Eat a knight, and Kirby gets a sword. Eat a rock monster, and Kirby can transform into stone. Eat a bird, and Kirby can fly faster, throw sharp feathers, and dive bomb enemies. All told, there are twenty-one unique copy abilities in the game.

Each stage is filled with an assortment of enemies, which will allow you to play with the copy ability of your choosing, swapping whenever you find an enemy whose ability you need more for that moment. Each stage is lovingly crafted with obstacles and challenges that can be made easier with the right ability. Sometimes you may only able to take a certain path if you have a specific copy ability. For example, if there are platforms hanging by a rope, you might need a bladed ability to cut them down and access the area beneath them. When you come across a cannon with a fuse nearby, you'll want the fire ability to light that fuse and set the cannon off.

As you explore the stages, you'll want to find energy spheres, as they are your ticket to unlocking extra content in the game. Some of these spheres are easy to find, while others are better hidden, sometimes behind secret doors. Last, but not least, some spheres will be hidden in the alternate dimension. Certain stages have a glowing enemy in the final section, and if Kirby eats that enemy he will gain a super enhanced version of an ability. Instead of just a regular sword, for example, Kirby swings a huge blade that not only slices through enemies but cleaves parts of the stage in half as well. Instead of breathing fire, Kirby can summon a dragon that flies across the screen, destroying enemies and trees alike. It's through the destruction of parts of the stage that Kirby will open the rift to the alternate dimension.

The alternate dimension parts are an interesting change of pace. You are tasked with getting through these stages as quickly as possible, because there's a fog of certain doom chasing you through these stages. Some of the stages are quite tricky for Kirby to complete by himself, and that's where the best part of the game comes in.

Kirby can enlist the help of up to three other players with drop in, drop out multiplayer. They can play as additional Kirby clones, Meta Knight, Waddle Dee, or Kirby's pudgy penguin rival, the great King Dedede. Only Kirby characters can eat enemies to gain their abilities, but the non-Kirby characters each have a useful permanent ability. Meta Knight has his sword which can cut ropes, Waddle Dee has a spear which can trigger switches from a distance and through walls, and mighty King Dedede has his trusty hammer, which can destroy steel blocks. Each of these abilities makes getting certain energy spheres that much easier. Having a buddy or two around is also useful for the areas where you are trying to carry a key from Point A to Point B. Since you can't attack while holding a key, your friends can clear the path of enemies while you focus on just making the jumps.

The first player is required to play as Kirby in the main game, which is a little disappointing initially. However, it makes sense when you think about it. Kirby is the most versatile, since he can take any ability, and different abilities are required to get all the energy spheres. In fact, sometimes the basic Kirby ability of sucking things up is needed to reach certain places. So in terms of content, Kirby's the only one who could 100% complete the game by himself. The other disappointing thing is if Player 1's Kirby dies, everyone goes back to the last checkpoint. If any of the other players lose a life, they can respawn a few seconds later if there are lives remaining. The action also always follows Player 1 Kirby. If the other players get scrolled off the screen, they will teleport back to Kirby. This can be a little frustrating sometimes, but from a simplicity standpoint, it makes sense. If everyone follows Kirby, there's never a question or a fight over which way to go.

Advertising for New Super Mario Bros. Wii made a big deal out of its 4 player simultaneous co-op play. In theory it was a cool idea, but in execution it was a chaotic mess of bouncing off each other's heads and into pits. In Mario it more often feels like you're just trying to not be in the other players' way long enough to make it to the end of the level. It's easy to tell that the majority of the levels in Mario were really designed for single player. In contrast, the multiplayer co-op in Kirby works brilliantly. Apart from the somewhat frequent piggyback rides that result from jumping on another player, the slower pace of Kirby makes for a far more pleasant co-op experience. Your friends feel like they are helping your progress instead of impeding it. You're all working together to solve the puzzles, get the energy spheres, and defeat the enemies and bosses.

The game looks great as you do it too. The bright, cheerful graphics and two dimensional gameplay certainly don't tax the Wii's hardware too much, but the attention to detail is there. The design of the stages and the obstacles in them generally match well with the theme of the level, and they seem specifically tailored to be more fun with friends.

The music in the game also matches well to each situation. With nearly one hundred different pieces of music used in the game, there is a lot of variety. And yes, there are some classic Kirby favorites in addition to all new tunes. The sound effects in the game are also spot on. Hits with feathers make a small slap, while hammers and stones make a far more substantial thud. Going into the sound test mode reveals 1,427 different sound effects!

I mentioned that the energy spheres unlock content in the game. As you collect them, you'll unlock the copy ability rooms, which let you pick an ability in advance to take with you into a stage; two minigames - Ninja Dojo and Scope Shot; and the various challenge stages.

Ninja Dojo is a simple minigame where you shake the Wii Remote to throw a ninja star at a target as it passes by the center of the screen. It's short, but there are three difficulties, and it's quite a challenge to get bullseyes on most of the targets.

Scope Shot is reminiscent of Battle Clash or Metal Combat: Falcon's Revenge - those Super Scope games where the goal is to destroy a large, angry robot by shooting it to pieces. This one is more involved than Ninja Dojo, and is a lot of fun, much like the Super Scope games.

The challenge stages are more traditional Kirby gameplay, but with a twist. You start the stage with a specific ability, and the stage is designed as a gauntlet to test your mastery of that ability. You have very limited time to get to the end of these stages, and when you finally do, you'll get additional points depending on how well you did. You'll get bonuses for taking out all the enemies, receiving no damage, etc. There are often secret areas hidden in these stages that will give a significant boost to your score if you can spare the time to complete them and still get to the end. In order to get a gold rank on every challenge, you'll need to be able to reliably use each ability in multiple ways. A little memorization helps too.

Once you clear the game, a new "extra" mode opens up, with a much tougher challenge. Less health, the fog of doom moves faster, and bosses have some new tricks up their sleeves.

There's also the Arena mode, which is basically a boss rush challenge. I'm not a huge fan of this mode, but the game certainly isn't hurt by its inclusion.

One thing I haven't mentioned yet is that the main game does have some use of motion controls. Although they could easily have used buttons instead, the motion controls are minimal, and non-intrusive. In fact, off the top of my head, I can think of only a few instances they are used. A couple of the super abilities have you pump the Wii Remote one or more times. When you are caught by certain enemies, you can shake the Wii Remote to get free. When you want to suck up large blocks, you can shake the remote while inhaling to get more or bigger blocks. This is essential in some of the alternate dimension stages. Lastly, with the spark ability, you can shake the remote to develop a static field around you (although this one can also be done by rapidly pressing the d-pad in different directions as well). None of these interfere with the enjoyment of the game, and for the most part actually feels pretty natural.

TLDR version: Kirby may not be as popular as Mario, but it certainly isn't due to lack of quality. Kirby's Return to Dream Land holds its own against the best that the plumber has to offer, and is a contender for the prestigious title of best game on the Wii. Anyone with a Wii owes it to themselves to track this game down, grab three friends, and feel the love.
Review Page Hits: 1 today (615 total)
mediahook