Rejoice! A brand new beat-em-up! And it's good! 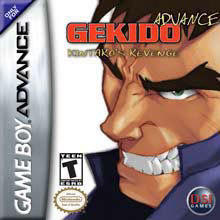 The game starts off fairly innocently. Tetsuo, the main character, is sent to a small village to investigate reports of zombies. Zombies are there, yes, but that's not the only thing he finds. There are a good variety of enemies, as well as palette swaps (in traditional beat-em-up fashion), each with their own particular style. The zombies lunge at you, throw knives, spit blood, etc. The martial arts ladies jump around and kick a lot. The statue men hit really hard. And they all look good while doing it.

Simply put, Gekido Advance is a work of art. The graphics are both well drawn and well animated. The fluidity of animation is amazing. We're talking Capcom 2D fighter level of animation. The sprites are nice and large and hit detection is spot on. In between beating things up and moving around, you'll also be treated to some neat cutscenes that showcase more of Naps Team's high quality art (I guess they advance the story too). Backgrounds and other objects are fairly detailed as well. Gekido Advance is a treat for the eyes. Quite an accomplishment for a Game Boy Advance game.

One thing that makes this game different from other beat-em-ups is the exploration aspect. You don't simply travel from left to right beating the piss out of everyone you meet. There's plenty of beatings to be given, but there are also some people to talk to as well as rooms and buildings to explore. There's no time limit, so you can be as fast or as careful as you want.

But Naps Team didn't stop there. They improved the beat-em-up genre again by giving Tetsuo a fairly large combo variety. It's still not as deep as your average Vs. Fighting game, but it's much cooler than just pressing the same button over and over to get the same combo over and over. In Gekido Advance, you can mix and match punches and kicks to make up a combo to your liking. You can also interrupt a combo and do a back attack to hit enemies trying to sneak up on you from behind.

The controls are simple and intuitive - either shoulder button will make you jump, the A button will make you punch, and the B button will make you kick. Pressing A and B together will unleash a chi attack that will damage nearby enemies (and yourself if you use it too often). There are no weapons to pick up and use like in a traditional beat-em-up, although Naps has compensated for this somewhat by having defeated enemies sometimes drop powerups (and powerdowns) such as food, increased speed, increased power, inability to attack, reverse controls, etc.

The music in the game does a good job in setting the mood as calm music for exploration gives way to dramatic trumpets and such for battle sequences. It's nothing new, but it works. It does sound a bit tinny coming through the GBA's speaker though. But you don't really get tired of the music...you don't really have a chance to. Gekido Advance isn't exceptionally long (nor are most beat-em-ups), with 5 chapters and 5 bosses. Even so, they didn't overlook people who don't want to play the whole game in one sitting. Short passwords are used in lieu of an outright save feature. And by short I mean five letters and the last one is always O (in the North American version of the game, anyway). The levels are long enough to be satisfying, but not so long that you shouldn't be able to complete at least one in a single play session.

The single complaint I have about the game is that you can't skip the cutscenes. And yes, while they are important for the story, it doesn't really matter the second or third time through....or the first time if you just want to beat things up. Wow, that's my only complaint? Yes. So go pick it up if you haven't already. It's really a lot of fun, and the cutscenes don't last too long.
Review Page Hits: 2 today (1,297 total)
mediahook