Agetec's page for the game 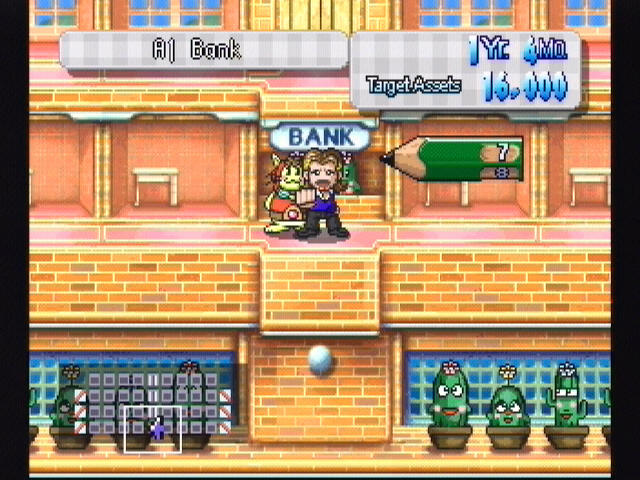 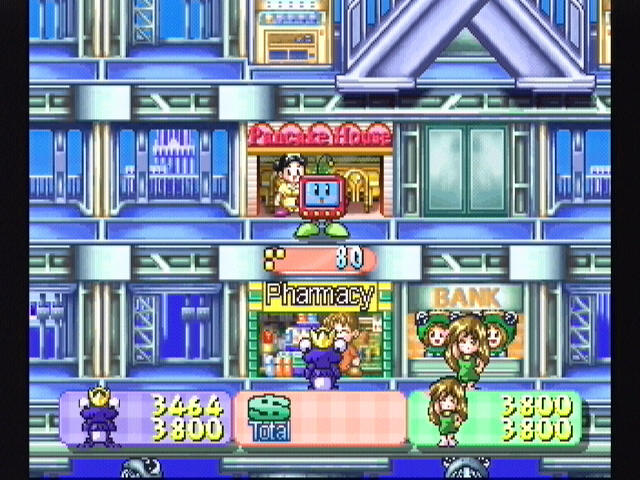 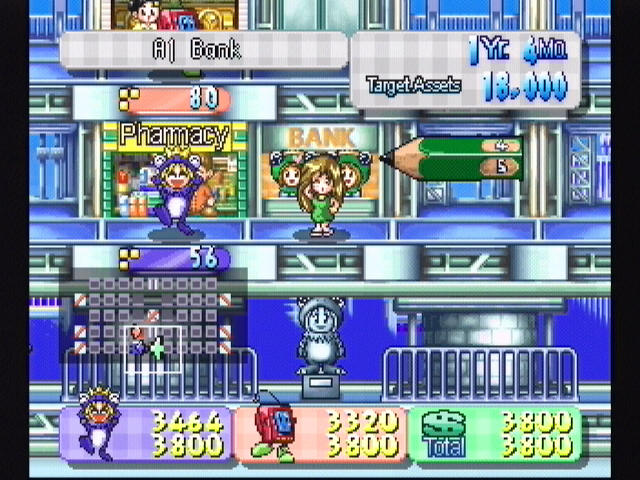 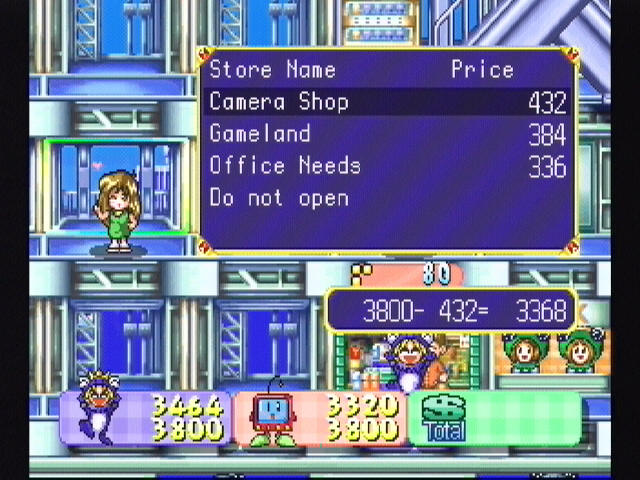 I'm going to be honest - Top Shop is the budget game that really made me believe in the concept of budget gaming. Up until Top Shop, virtually all the budget games I had played were of the "you get what you pay for" variety. But Top Shop kindled my love for cheap games and is probably the biggest reason budget-priced games should exist at all.

The game starts everyone at the bank after determining the play order, and then everyone rushes off to open various stores. The store names range from ordinary to peculiar - Bobson's, Curry House, George Video, Meat Land, Tour Tours, Aesthetics Julia, and lots of others. Each store has a variety of merchandise for sale, and when someone lands on an opponent's store they have to choose something to buy (you can buy a maximum of two items per visit). My only disappointment with this game is that the items don't really do anything; despite the clever names like "Old Movie" and "Video Game" at George Video, they are treated exactly the same way rent is treated in Monopoly. It's just a simple exchange of money. Each store has to be restocked and players restock a store by landing on it. If a store sells out entirely, then whoever landed there has the option of buying out the store and opening their own.

There are quite a few mall layouts to choose from, but all of them share some similar characteristics. Each area of the mall is divided into a 3 or 4 space sections. You can only own one type of shop per section, but there's a reason for this. When you build a store next to one you already own, the stores merge and become a double-sized store. The advantage to this is that the inventory space in each section of the store is increased by 1 and you can sell more expensive items. The largest stores can be up to 4 spaces and can carry extremely expensive items. The downside to this is the price to build merged stores is quite a bit higher than single stores. All the malls also have an elevator or two, which sometimes works and sometimes doesn't. You never know until you try to use it. Each mall also has a bank where you get paid every time you pass it (extra if you land directly on it). The amount you get depends on how many stores you have and how long it has been since you were last at the bank.

The "Cash Back" feature of the game is something that I don't entirely understand, but it adds another element of randomness to the play. Every now and then when you buy something, you'll get your money back and then some. It happens very seldom (maybe 2% of the time), and apparently at random. This money comes right out of the store owner's pocket, so it is great if you're the buyer but annoying if you're stuck paying out.

When you roll the pencil, you'll roll a number from 1 to 8 or an E. If you get E you must draw a card. There are good cards (collect money from everyone, all stores except yours are closed, etc.) and bad cards (you dropped half your money, you must sell a store, etc.) most of these cards also give you points which can be exchanged at the Bank for special bonuses. You can also get a point from buying something, but this appears to happen at random too (although more frequently than Cash Back). The special bonuses at the bank range from nice to devious, depending on how many points you have, you can open a new store for free, get extra money, restock your stores, cause your opponents to lose money

One other unique feature about the game is the money is separated into two categories: Cash is the amount of money you have on hand, and Assets are the total value of everything you own (including your cash). If your cash is below zero at the end of a turn, you'll have to sell a store to come up with the money to put you back in the black. In Monopoly, the only way to win was to bankrupt all your opponents. Top Shop changes this formula slightly. You can bankrupt other players, you can reach a certain asset level, or you can win by saving up 99 points and choosing the "Claim Victory" bonus at the bank (this one will almost NEVER happen).

While the true beauty of the game is multiplayer, those of us with no friends are not left out in the cold. There is also a story mode where you play as Meower (a cat thingy) in his quest to make lots of money.

Anyway, the game costs ten bucks or less and you can probably find it here on GameTZ if you can't find it at your local game store. It's well worth it if you've have friends and a PlayStation.
Review Page Hits: 1 today (1,368 total)
mediahook