official site
If you get stuck

Great turn based strategy game, plus its portable 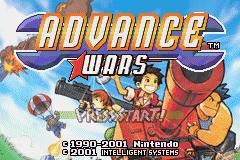 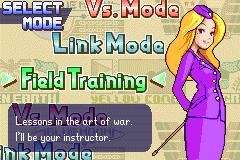 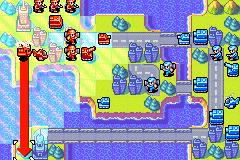 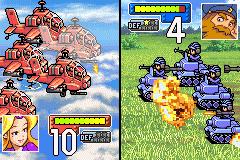 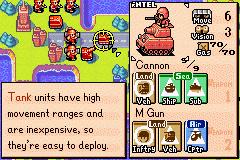 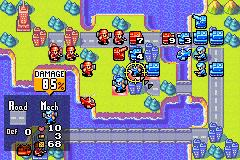 Advance Wars is one of those easy to learn difficult to master kind of games. It is a turn-based war strategy game, in which you control a Commanding Officer (CO). The object is to eliminate your opponent, by destroying all of your opponent's forces, or capturing their HQ. You must use your brain to play this game, so if you don't like using your brain much while playing video games, I don't recommend this.

You play as a CO, who must eliminate the enemy CO using a variety of different units. There are Ground, Air, and Sea units. Every unit has a certain amount of ammunition, and fuel. These are depleted when shooting and moving. Each unit has advantages and disadvantages. Some units are stronger against specific units. For example: Anti-air units are very strong against air, but weak against tanks. They can't attack sea units. Every CO is different. They are all good at one thing, but bad at another. You should use this to your advantage. Another thing that comes into effect is terrain. Some terrain provides more cover than others, and some types are easier to move over. Also different types of terrain offer different amounts of defense. Weather is also another important factor. Snow slows units down. Rain can make it harder to see. Some COs even have advantage or disadvantages in different weather. Units are purchased with money. You get 1,000 gold per property every day. Ground units can be purchased from Factories, air from airports, and sea from ports.

The Modes
Advance Wars is very easy to get into. There is a Field Training Mode that teaches you the basics of the game. Upon completing Training Mode, you can go on to the harder stuff. The other modes are Campaign, War Room, Versus, Stats, Battle Maps, Design, and Link. Campaign Mode is the meat of the game. In campaign you go through the storyline, fighting the other armies. There are around 20 missions in one play through. However you can access different missions if play the game through again, choosing different COs, and beating levels in different ways. Some of the missions can be quite difficult, especially on Advance Campaign, which is unlocked after beating normal. The War Room is another big part of the game. In the War Room there are 20 missions. You must defeat the computer opponent(s) while being outnumbered. Some of them can be very difficult to S-Rank. In Versus mode you can choose any map you have previously purchased in Battle Maps. You can choose the options, such as weather and Fog of War, and enemy COs. You can even have more than one human controlled player. Stats shows you your rank, and best scores on War Room missions, as well as you Average score in Campaign and Advance Campaign. In Battle Maps You can buy any maps and COs that you've unlocked. You pay with coins you earned by beating missions. In Design Mode you can create your own map. You can place any type of terrain, building , and unit wherever you wish. You have 3 save spots for created maps. In Link Mode you link your GBA to up to four of your friends'. You can choose your map and COs just like in Versus Mode, except you don't need to pass the GBA back and forth. If your friends do not have their own Game pack you have to play a small pre-deployed map.

Difficulty
One thing could be viewed as bad is the games difficulty. Some of Advance Campaign missions are extremely hard to beat, let alone get an S-rank on. One wrong move could cost you the level. I personally like the challenge, as it makes the game much longer. I did not subtract from the score for this.

AI
For the most part the AI is pretty intelligent. It makes different units according to what you make, and uses them strategically. The problem with is that the AI will go after your APCs no matter what.

Control
The controls are perfect. Your units are easy to move around.

The sound effects are great. You hear different sounds for whatever weapon you are shooting, and whenever you move. The music fits the game well. Each CO has their own theme.

Advance Wars has unlimited replay value. The campaign takes a long time by itself. Then you have to beat it numerous times to unlock all of the COs, and get an S-rank Average. Then you still have Advance Campaign to S-Rank, along with all 20 War Room Missions. When you've finally completed the entire single player, there is Link play so you can battle you friends. The only reason I stopped playing this game is because the second one came out.

Overall, this game is definitely worth your money. It will keep you playing for hours and hours. It is great as a portable game, since you can save 90 percent of the time. It saves with every unit exactly as you left it, not just at the beginning of the level.