Welcome to Bright Falls where it's night 20 hours a day. 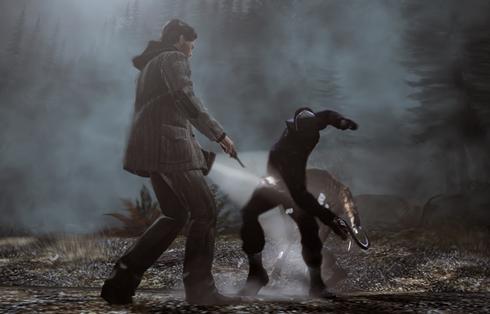 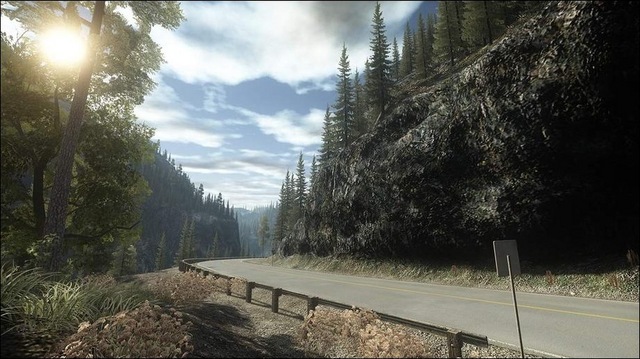 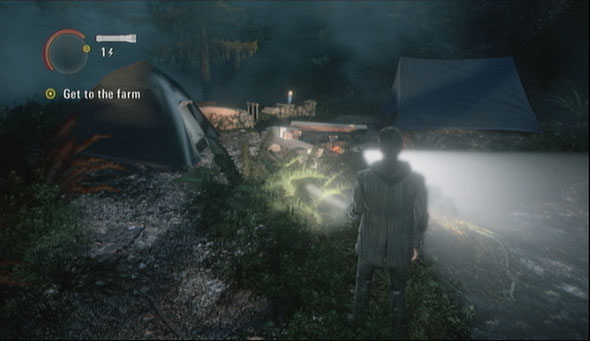 Alan Wake, a writer has been having some problems lately. Writer's block hasn't allowed him to write a book in 2 years. So Alan and his wife Alice decide to take a vacation to Bright Falls Washington. Right from the beginning nothing is quite right, so you get to your cabin on the lake which they thought was supposed to be by the lake, not on it. After getting inside, Alan and Alice have a fight and Alan storms out only to see the lights shut off followed by a blood curdling scream from his wife. Desperately Alan searches the Cabin but finds no signs of her, thinking he sees a body in the water he dives in to find her and suddenly awakes in his wrecked car and his face damaged by the steering wheel.

This game takes place through the course of 6 "episodes". Each episode varies in length but is very well constructed and flows perfectly with the story. Much of the story of this game however is not told through dialogue, it is conveyed through manuscript pages that Alan finds laying around that seem to know everything that has happened but also things yet to come. The stranger thing about these manuscript pages is that they seem to be his own work yet he never wrote them.

The main antagonist of this game is very unclear for most of the time being that is is a mystery/thriller/horror game. However you are aware that the darkness is more than just the absence of light; it is indeed against you. Most enemies are called "Taken" and are men that seem to be shadows of their former selves made of pure smoky darkness

Armament consists of 2 categories, guns and light. You will always have a flashlight when you can encounter enemies and you will need it.

When you see a Taken you will first have to light them up. They have a circle covering them and it shrinks the more light they are exposed to until they are vulnerable which you can also tell by them popping from darkness to normal looking people.

You shine your light on them with a light press of LT and focus it with a full press. This will drain your battery like nobody's business but luckily you have a cache of batteries on your person to change them out in times of need. This seemed annoying at first until I realized it recharges on its own, as well the batteries are just for in battle. Also using the full focused flashlight on enemies will blind them while it's on them, stopping them from throwing things or advancing quickly.

Also in the light category are the flare gun, flares, and flashbang grenades. The flare gun and grenades explode and can wipe out many enemies without ever using a flashlight or firearm. Flares do the same thing as your flashlight except radially. Light a flare and drop it to keep yourself safe till it dies while also getting enemies closer to being vulnerable.

Firearms include a six shot revolver, a double barrel shotgun, pump shotgun, and hunting rifle. All have their perks; my favorite was the pistol honestly. It was the fastest and ammo was plentiful although ammo was never much of an issue.

Graphics B
A lot of people were saying crap like this is the best looking game ever, not so. But that being said I still liked the visual style of the game. Forests were lush and populated with lots of trees that all looked fantastic. Urban environments were decent but not as impressive as the forests, cars did not move very realistically in cut scenes. They seemed to hover slightly above ground and move along in a very jittery way. The other thing I was peeved by was the lip syncing and faces. The faces looked just alright and when they moved it looked unnatural, not to mention the lips did not match up with the words. Enemies, effects, and the woods all looks amazing and this game makes good use of lighting.

Now the sound was good most of the time but there were a few instances where it cut out for a few seconds completely which I find unacceptable. I have the game as a full download on a 360 so loading was not causing the sound issues. Voicing, sound effects, music, etc. were all great. Realistic sounds with good direction as well as keeping me in the moment of the game. Honestly I would have given the sound category an A had it not been for it cutting out during some checkpoints and near other loading screens, I just don't see how it was overlooked on such an otherwise great game.

4 days after I beat this I still wanted to start a new game and do it all again, but I had to wait because of backlog. Once you beat the game on Hard (available from the start along with Normal) you unlock Nightmare mode which makes everything harder and adds extra manuscript pages to explain more about the story, Also this game was just so badass from the beginning it leaves you wanting more which can also be aided with the 2 downloadable extra episodes for 560 Ms Points each.

So learning this game took a bit. There were a few controls it took me awhile to get used to, but it did not hinder my experience. I give this a B- for it being initially very difficult to get your bearings and get used to Alan walking realistically and not stopping immediately, etc.

DLC "The Signal"
This is a sub-review of the first piece of DLC for Alan Wake titled simply The Signal.

The Signal is a pretty impressive piece of DLC; it has you jumping into the brain of Alan and battling with his inner demons. You will be thrust back into the world of Bright Falls re-visiting some of the old areas that you had to traverse during the course of the main game. While this would normally seem tedious, this episode keeps everything fun and fresh as you will see the areas but events will not quite be the same as before. This will add a few new elements to the gameplay which might make you even wish they were in the main game. This is 560 Microsoft points you will not regret spending.
Review Page Hits: 0 today (521 total)
mediahook