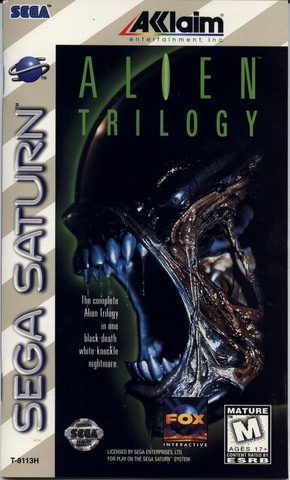 I enjoy a healthy love hate relationship with Alien Trilogy for the Sega Saturn. I can remember sitting down with my brother to play the game and we promptly turned it off during the opening cinematic. We returned the next day with daylight as our ally, but the sense of atmosphere followed us into our dreams and made sleep an ordeal.

Alien Trilogy accomplished this with a combination of sound, first person view, limited ammo and dark, maze like level design. The atmosphere was tangible. I truly felt like I was trapped in the colony on LV-426, my pistol running dry as eyeless, razor sharp Xenomorphs closed in for the kill. To me, this was the first truly terrifying Aliens video game experience. I had dabbled in Alien 3 and Aliens vs Predator for the SNES. I had spent a healthy amount of quarters on the arcade classic Aliens, but the first person experience introduced a whole new level of immersion.

The game opens with a well directed cinematic. The Colonial marines land on LV-426 and are quickly decimated by the Xenomorphs, leaving Ripley as the sole human survivor. Another interesting angle is you assume the role of a female in a first person shooter. Seventeen years later, a female protagonist is still a somewhat rare occurrence in the genre. While not the first, it was something that stood out at the time.

Graphically, Alien Trilogy looked good when it was released. The environments were well crafted(and don't look bad today), and made exceptional use of lighting. The darkness that is always ahead of you can he very unnerving(though it was probably a draw distance issue). One trick I really enjoyed were the xenomorph's that stood still as if frozen. If the background was right, I would sometimes not see them until they moved and it made for a great experience. The xenomorph's and their various forms only have a few frames of animation though.

The sound is put to good use. The constant tick, tick, tick of the motion tracker is creepy as always and really heightened the thick atmosphere. The sound effect of the Facehugger's fingers skittering across the metal floors instantly makes your heart beat faster. The weapons sound appropriately tinny as most of the action happens inside the metal constructs of the colony from Aliens and the prison from Alien 3. Another great effect is the sound of Ripley's boots on the metal grating and floors. Cocooned prisoners beg to die and the xenomorphs hiss and snarl, but neither sound particularly great. I would guess this game is best played on a quadrophonic stereo system.

The controls are the standard DOOM style. You can aim left and right, but aiming up or down is automatic. You can strafe using the shoulder buttons. It isn't anything special, but it is responsive. Strafing will become more important later on when you have multiple aliens trying to rip you to pieces. Everything else is the common action button, grenade button and weapon switch button. There isn't any melee, as it should be.(cough Aliens: Colonial Marines cough)

The weapons are fairly accurate depictions of the ones used in the second movie. There are pistols, pump action shotguns, pulse rifles, smart guns and flamethrowers, but sadly no sharp sticks. You will have to provide harsh language on your own. The pistol mostly serves the purpose of dispatching weaker enemies to conserve ammunition for the better weapons. The shotgun feels appropriately powerful and tends to devastate enemies at close range. The pulse rifle give a higher rate of fire and a grenade launcher. The smart gun auto tracks targets, and rarely misses. The flamethrower is powerful, but a little unwieldy and burns through fuel at a high rate. Overall, the weapons are nice if not exotic, and fans of the movies will appreciate them more than those who haven't watched them.

Level design consists of finding items or switches while surviving enemies that range from facehuggers, chestbursters, mercenaries, and synthetics to four types of xenomorph: warrior, juvenile dog alien, adult dog alien and the queen. Acid blood is a danger as well as steam, fire and acid pools. Secret areas can be accessed by using grenades or seismic survey charges. The areas can be a little confusing at times. In the garage level you cross a certain barrier, but if you missed one of the required batteries to power the door, you can't go back, so you are forced to restart the level. There aren't many moments like this, but they can be frustrating. Many maps circle around with multiple doors, stairs and similar looking corridors and can be a headache to find your proper orientation.

Alien Trilogy didn't break any new ground, but was a well executed effort. Players can see the admiration for the source material through the work of the developers. There are some good scares, and the three boss battles with the queen can be intense. If you like first person shooters or Aliens related titles, you can't miss with Alien Trilogy.
Review Page Hits: 0 today (1,000 total)
mediahook