One of the coolest obscure games ever! 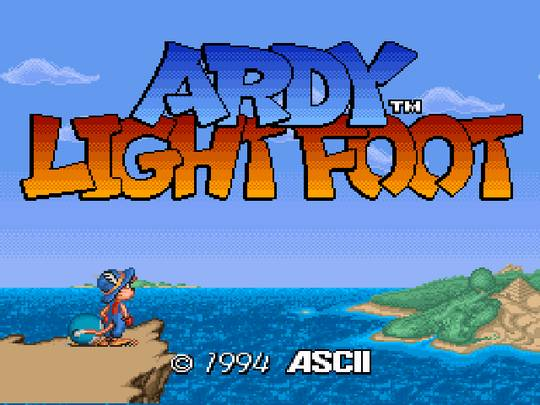 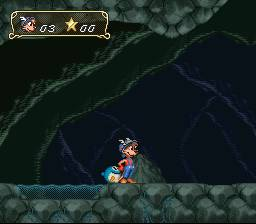 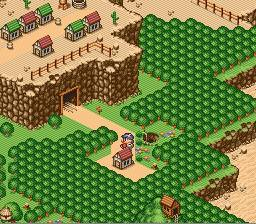 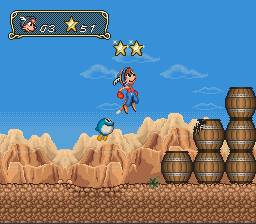 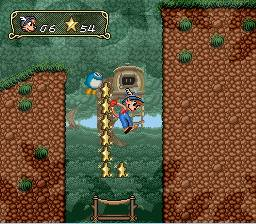 Let's wind the clocks back to the 90's. That decade, for the video game industry, had almost every company having their own anthropomorphic animal character at one time or another, such as Sonic for Sega, Yoshi for Nintendo, Sparkster for Konami, and Aero the Acrobat for Sunsoft. Out of all the furry characters to ever kick butt on the video game world, one character was totally neglected, and a select few know about him, let alone played his game. Ironically, it deliberately begs for a sequel, due to the "To Be Continued" appearing at the end, but a sequel was never meant to be. His name is Ardy Lightfoot, a product of a company once called ASCII, and since the company was almost unknown outside of Japan, another company called Titus decided to publish the game internationally. Nobody knows for sure what he is (A fox? A cat? Who really knows; I always called him a "wing-eared cat" because of his cap), but that doesn't mean his game isn't good.

Ardy is an adventurer who, along with his pet Pec, decided to find seven Chaos Emerald-like gems that are said to be of a broken rainbow. He who collects all the pieces gets one wish, and Ardy isn't the only one eying on the jewels; the tyrant Visconi wants the gems as well, with thoughts of conquering the world! The minions are sent out, and Ardy must jump and dodge his way to complete his quest. The story itself is very interesting; there's no dialogue in this game (apart from the elder reading an old tablet) and events are played out instead of spoken. I do think dialogue might help a little when coming across some points in the game, though. The characters are more than enough to make the setting of the game like a fantasy world.

Ardy can run (followed by a short walk), jump, toss Pec into eating certain enemies, use his tail to bounce into higher ground or on enemies, and use a special mirror that makes almost every enemy and projectile harmless (depending on how you use this move, it can be the cheapest move in the whole game!) Ardy is allowed two hits before he loses a life, with the first hit losing Pec. Gold stars float in the air, and collecting 100 of them will give the hero an extra live. Sometimes Ardy will find a treasure box that will contain a 1UP, 10 gold stars, Pec (if you already lost him), an air tank that lets Pec float in the air and give Ardy a ride, and a spike helmet that lets Pec chew on stuff he couldn't before. An occasional statue serves as a checkpoint if you jump on it, which will be very handy if you later kick the bucket. Every level is split into different "chapters", but that doesn't make the levels any easier. Precise use of the techniques and control is the key in this game, which will leave players wither frustrated or amused, depending how experienced the player is.

The graphics totally make use of the SNES's palettes, despite the fact that there are no Mode 7 graphics. The sprites are totally unique, and the levels each have their own charm, such as a forest, an island filled with ancient ruins, and even the insides of a huge worm! The characters' personalities really stand out, from the adventurous Ardy Lightfoot to the greedy Visconti, yet at the same time each has his or her own mystique; Very little is known about their backgrounds. That makes the game all the more appealing. My only complaint is that Ardy looks a little flat, especially when he's running, but that doesn't detract too much from the game.

The music itself adds greatly to the game, rivaling even some of the RPGs of the day. Using the SNES's sounds to make a game is one thing, but, if used properly, some of the best soundtracks in the world have come from this system! That's exactly what the sound writers did with this game. The mine is rambunctious, the forest is lively, the pirate ship is adventurous, and the ruins are calm and mysterious. This soundtrack almost feels like it came from a movie!

The only roadblocks that hinders this game is the precise gameplay and slightly ambiguous story, but the music, characters, and settings take this obscure game and sets it as one of the best platform games to graze the Super Nintendo. This game truly deserves either a sequel or a remake and definitely deserves a fan following. It just goes to show how much love and care the designers had for this game, and ought to be in every SNES fan's collection. Maybe someday Ardy Lightfoot will bounce back into our hearts once again and let the world know just how good he actually is!
Review Page Hits: 0 today (422 total)
mediahook