Grin and Bear It (No, seriously. This game will make you grin.) 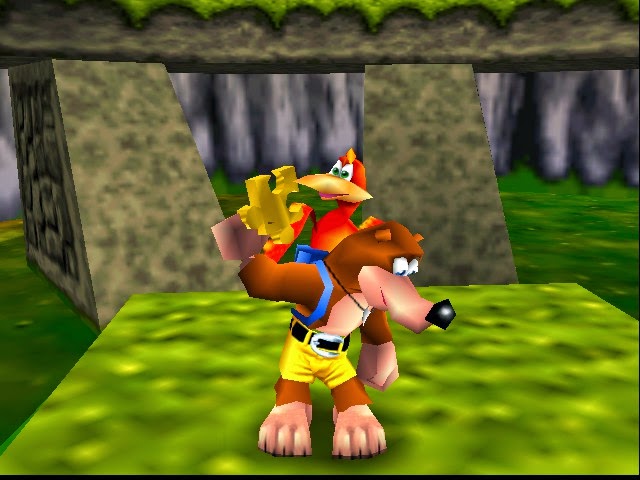 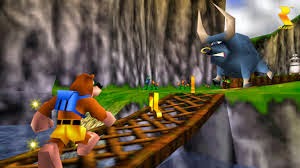 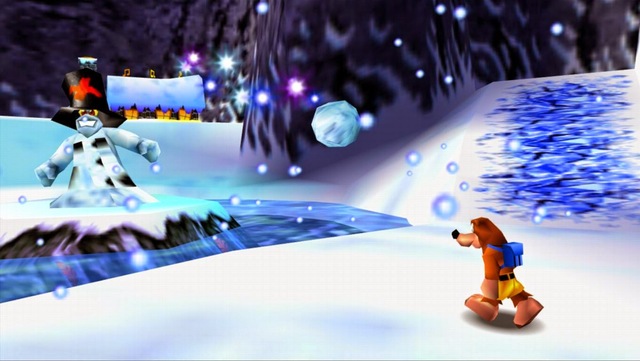 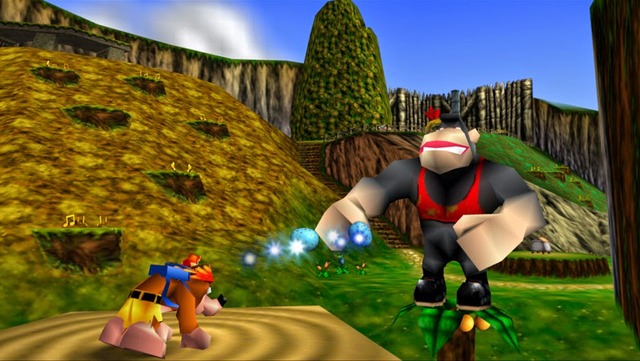 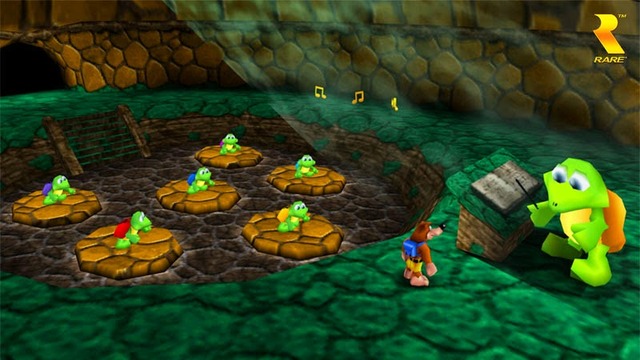 The similarities between Super Mario 64 and Banjo-Kazooie are definitely apparent. It's no secret that Rare indeed developed Banjo-Kazooie with great inspiration from Nintendo's launch title for the 64. However, there's enough newness here that Banjo-Kazooie doesn't feel like a total ripoff of Nintendo's work. Instead, what we get is a 3D platformer that I have no qualms with saying is a superior product to Super Mario 64.

Banjo-Kazooie begins with the bear and bird pair (that's Banjo the bear and Kazooie the bird, for those of the uninitiated) resting in bed. Meanwhile, Banjo's sister Tooty waits outside, anxious to go out on an adventure. All of a sudden, the wicked witch Gruntilda, known for speaking in verse, rides upon her broom, swoops down, and nabs Tooty. Grunty's plan is to rob Tooty of her beauty while making herself thin and beautiful. Hearing the commotion, Banjo and Kazooie leap outside to find Tooty bear-napped and a helpful mole named Bottles ready to give them advice to help the bear and bird pair rescue Banjo's sister.

Without question, Banjo-Kazooie brims with personality and charm. Gruntilda certainly steals the show with her funny rhymes, as well as her unconventional ways she goes about her business as a villain. This is seen through a late-game game show hosted by Grunty herself that tests the player's knowledge on many aspects of the entire game-- from distinguishing between areas of the game from closeup pictures to deciphering between character voices. Then there is the comedic banter between Banjo and Kazooie, the latter of which isn't shy about insulting any and every character the duo come across.

Banjo-Kazooie is very much a product of inspiration of Super Mario 64. However, Banjo-Kazooie goes a little deeper with the amount of collectibles to gather throughout the duo's adventure. Whereas Mario's 3D platforming romp featured the main collectible in the form of the Power Stars and side collectibles as red and gold coins, Banjo-Kazooie offers much more to acquire if you want to go for 100%.

For one, Banjo-Kazooie's Jiggies, golden jigsaw pieces, serve as the game's equivalent of Super Mario 64's Power Stars. These are the main collectible, and they are used to open new worlds within the game. However, that's just the start of what needs to be gathered. In levels, collecting five differently colored Jinjo characters reveals a Jiggy to collect. There are also Blue Eggs, Red Feathers, and Gold Feathers, providing ammo, the power of flight, and the power of invincibility respectively.

Musical Notes, of which there are 100 in each world, need to be collected in some capacity to open locked doors within Gruntilda's lair. The doors lead to new chambers of Grunty's hideout where new worlds await. However, the process of opening new worlds is more involved, albeit slightly so.

Each level has an accompanying picture that is missing Jiggies from it and needs to be completed. Through finding the picture, piecing it together for a finished product, only then will the way to that picture's world open.

Aside from those collectibles, there is one final one to go after, silver Mumbo Tokens. These are the currency in which you deliver to the game's shaman, Mumbo Jumbo, in exchange for him to work his magic and turn Banjo and Kazooie into one of many world-specific transformations. For instance, the first world of the game sees Mumbo Jumbo turning Banjo into a termite, able to trek on slopes that would otherwise be deemed too awkward to climb on for the bear and bird by themselves. Many times a transformation has more than one purpose within a world, but sometimes a transformation is just there for one reason-- to get a Jiggy that wouldn't be reachable without Mumbo's magic.

While Super Mario 64 kicked you out of a level once you collected a Power Star, Banjo-Kazooie allows you full exploration of worlds even after a Jiggy has been collected. Whereas Super Mario 64 had seven Power Stars per level, Banjo-Kazooie has ten, in addition to the 100 Musical Notes to collect, and one Gruntilda switch to stomp on that summons a Jiggy in Gruntilda's lair, the hub world of the game.

Starting in Mumbo's Mountain, the tasks that Banjo-Kazooie asks players to do in order to acquire Jiggies are relatively simple. For honeycomb's sake, some of the Jiggies are right out in the open with no interference from enemies. As you proceed through the nine worlds of the game, the objectives to nab more Jiggies become more and more complicated, making it so that Jiggies that were right out in the open now require more platforming prowess to collect. Meanwhile, some Jiggies require a sequence of events, albeit a bit basic (this is a game meant for everyone, after all), to acquire the golden prize.

The worlds are well designed and feature plenty of nooks and crannies to explore. Each has a set theme and set of challenges presented to the player. The starting world, Mumbo's Mountain, introduces basic platforming challenges, whereas the next world, Treasure Trove Cove, implements a greater focus on puzzles, swimming, and even flying challenges. From the frozen heights of Freezeey Peak to the four unique seasons of Click Clock Wood, Banjo-Kazooie's set of worlds are amazing in both concept and execution.

Unlike Super Mario 64, Banjo and Kazooie do not have their full arsenal of moves immediately from the get-go. Instead, they have to come across Bottles' mole mounds in the various worlds of their adventure to save Tooty. While baseline moves like a flutter jump, great for precision platforming, and a backflip are available, among other moves, Banjo and Kazooie can learn multiple new abilities. For one, Kazooie can learn to shoot eggs out of her mouth as well from her rear end (ouch). Then, there's the Talon Trot, allowing Kazooie's apparently strong legs to carry Banjo up otherwise slippery and steep slopes. By the sixth world of Banjo-Kazooie, the pair will have learned every move in the game. It may feel unnecessarily limiting to some players, but I found it that with all of the moves Banjo and Kazooie can learn, having all of them available at once would have been a bit overwhelming. Not only that, but learning new moves meant that new platforming challenges based off of them could be implemented at a steady pace. It makes for a perfect amount of pacing.

Also unlike Super Mario 64, the camera seldom causes trouble or unintended deaths. Now, to be fair, Super Mario 64 was the pioneer of the 3D camera, not having many contemporaries to take notes off of. However, Banjo-Kazooie does, and it makes for an experience with the camera that rarely causes aggravation and headaches, which is another example of superiority over Super Mario 64

I find myself preferring Banjo-Kazooie over Super Mario 64 for several reasons other than just the camera. For one, a handful of courses within Super Mario 64 featured plenty of tedious tasks and Power Stars to obtain. Not only does Banjo-Kazooie feature far less of these tedious tasks, but it also doesn't kick you out of the level once you've nabbed a Jiggy. Now, obviously Super Mario 64 modestly altered levels based off what Power Star you selected as the one you were going for, but still, this meant that you were oftentimes required to play through the same portion of level again and again just to acquire a different Power Star. I don't want to remember how many times I've scaled Tall, Tall Mountain in Super Mario 64. Needless to say, the lack of repetition in Banjo-Kazooie makes it easier to replay for me.

Banjo-Kazooie also possesses a lot more wit and humor, offering a cast of supporting characters that deliver humorous conversations and characters in levels that adorably refer to themselves in the third-person. I adore the dynamic soundtrack by Grant Kirkhope, delivering the same theme in a given level, only in a different octave or key depending on the area traveled to. Combine all of this with tight controls and a more beginner-friendly move set (thank you, Kazooie's wing-flapping to slow my ascent on jumps), and you have why I can't get enough Banjo-Kazooie.
Review Page Hits: 1 today (1,070 total)
mediahook