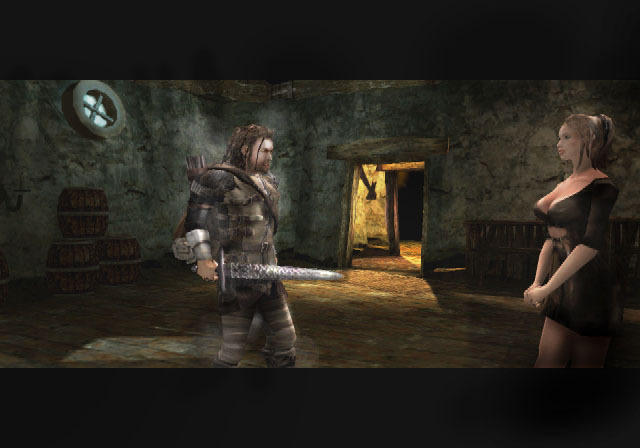 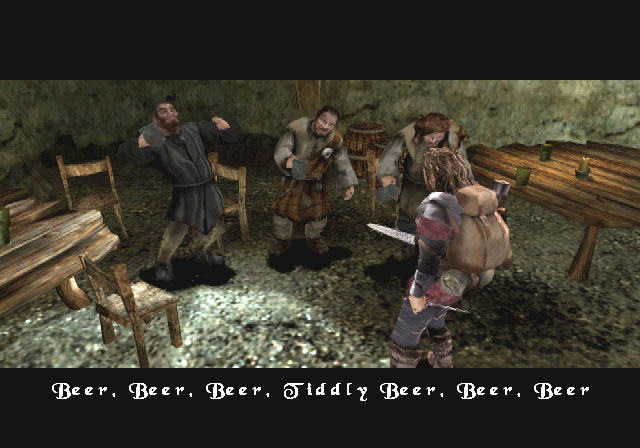 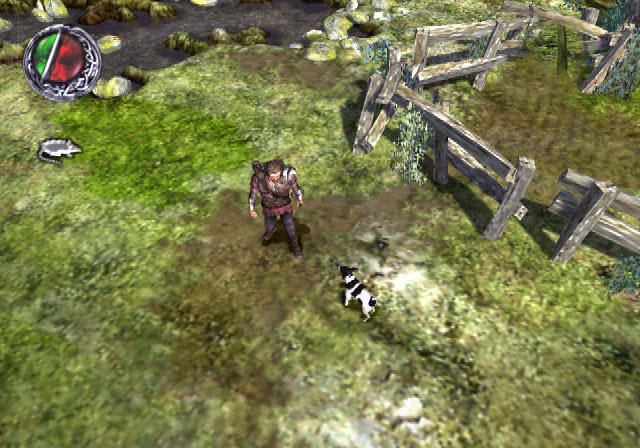 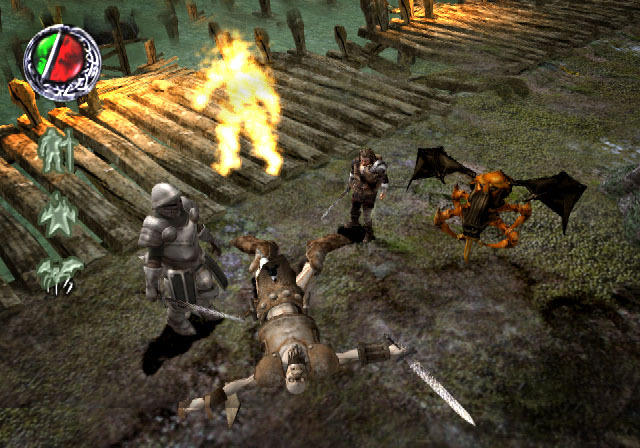 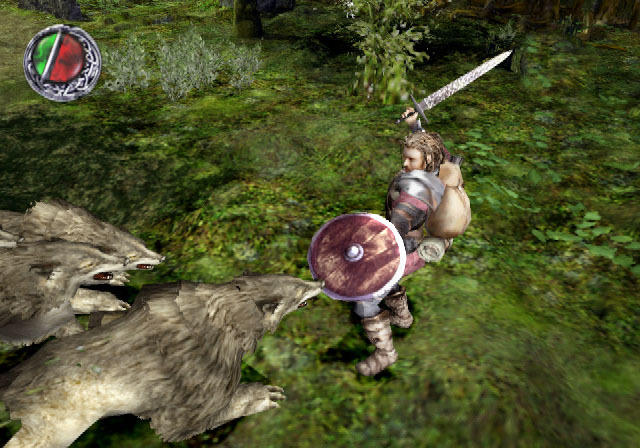 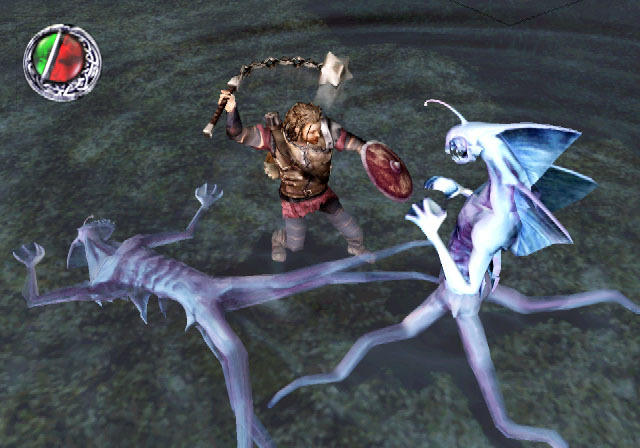 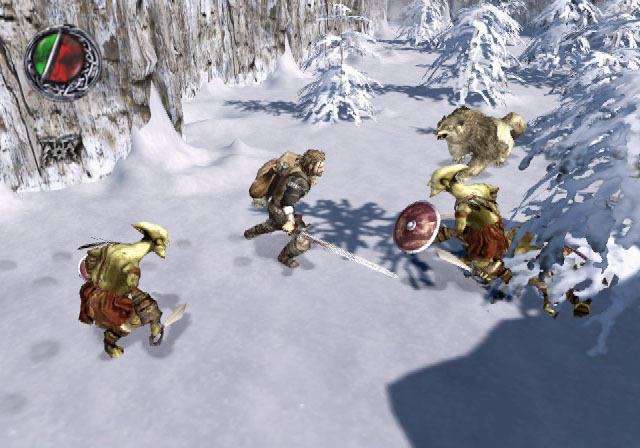 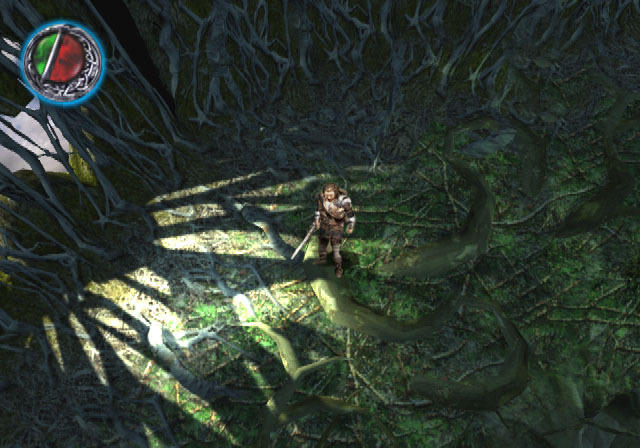 From the back of the box:
A quest for coin and cleavage. You are the Bard, a selfish rogue weary of pointless sub-quests and rat-infested cellars. Through magical song you summon characters to join you in battle-waging attacks, healing your party and taking damage on your behalf. Ready your weapon as you embark on a quest for coin and cleavage.
-Summon up to 16 creatures to fight, heal, block and get crushed by traps.
-Less A (Artificial), More I (Intelligence). Smarter foes, fiercer battles.
-Advanced Attitude System. Your snarky or nice decisions change the course of the game.

Overall Impressions:
If you have a dirty mind, enjoy songs about beer, and like role-playing games (I sure do), I recommend buying The Bard's Tale or renting it for no less than five days. It takes about 18 hours to beat from start to finish.

The game in a nutshell
When you start the game, you choose what attributes that you would like your character to have. All of them are listed in the manual, but I recommend increasing these stats in the following order; Rhythm, which affects the abilities, strengths, and health points of summoned creatures, Dexterity, affects the damage inflicted by your bow (even the back of the box suggests increasing your ability to attack from a distance while your companions absorb the damage), and Vitality, the Bard's health points. It is not very important what stats you choose because they can only go up to 20, and they start at 8 on easy, 6 on normal, and 4 on hard. At the end of the game, I had everything maxed except Charisma, which affects prices at shops.

There are three levels of difficulty, but they only change your beginning stats and the number of save locations in the game. Nothing else changes between the different difficulty levels. The learning curve is also skewed. At some points during gameplay the difficulty changes between extremely easy to very difficult. For example, I died numerous times in the Finstown level, but during the final boss I beat it in less than ten seconds.

The graphics in The Bard's Tale are very similar to the Baldur's Gate and Diablo series. You view everything from a third person perspective above the Bard, but since you can't switch to a first-person perspective, the only different camera angles are a slight zoom-in, or out, and a 360-degree rotation. This makes it hard sometimes to see treasure chests and smaller foes, and you will get aggravated when the character is under a beam inside a house or beside a wall and you can't see what is happening.

But overall, the graphics are not bad. They seem a little out-dated considering the game was released in 2004. The images shown here were taken from the official website, which claims that they came from the PS2. I played the Xbox version of the game and the graphics were never as good as the shots provided.

Similar to the graphics, The Bard's Tale's gameplay is almost identical to the Baldur's Gate and Diablo series. It is a hack-and-slash, button-pressing fest. However, with many different weapons to choose from, the fighting does not get tedious. You have the option to choose between a variety of weapons such as a sword-and-shield combination, sword-and-dagger, flail, bow, axe, two-handed sword, enchanted weapons and others. In addition to your weapons, you can summon other comrades to fight by using your musical talents.

Unlike other games with player-summoned creatures (like Morrowind), the creatures in The Bard's Tale stay with you until they are killed. They are also actually helpful and will accomplish the tasks they are summoned for. There are 16 possible tunes for The Bard to play, and you start with the ability to summon a single comrade. But you can buy or find items that will allow you to summon up to four. For example, if you are kind to a puppy in the town of Houton, he will follow you on your quest and help you find treasure and attack enemies (with an upgrade).

As you fight your way through the very linear plot you acquire up to four artifacts that require stones to cast spells. Since you get the artifacts as parts of the plot, there is no way to miss them. The only side quests involve acquiring the 20 tokens that increase your characters stats and the five rare tokens that have stronger abilities.

Although the plot and story are linear, you have the ability to choose between giving Snarky or Nice comments. These options do not change the outcome of the game, but they will change how some NPCs will respond to you. Oddly enough, in most cases they respond more favorably when you are snarky to them.

The best parts of The Bard's Tale are the music, sound, and spoken dialogue. In fact, so many people have requested a soundtrack that the game's publisher has posted a good number of the songs for free on the game's official website. I could describe them to you, but I recommend listening to them for yourself. Each character has a unique voice that adds to the humorous dialogue. Even the narrator has comments about the Bard that will make you laugh.

The game has three different endings. You achieve each one by choosing a dialogue option at the top of the final tower. Luckily, there is a save location right before the final level. This will allow you to see all the endings fairly easily.

Finally, the game has specials that you can purchase in-game from monks via donations. These extras include music, artwork, and behind-the-scenes material. Word to the wise, do not wait till the end of the game to purchase these extras. If you wait too long, all of the monks will be gone.
Review Page Hits: 0 today (481 total)
mediahook