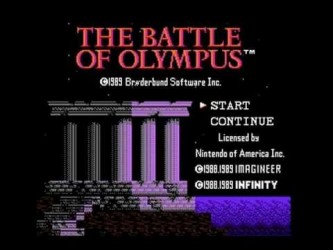 This is a memorable classic of the NES system, but the game-play and design really hinder it. To a collector this can be a special game because of the production quality that Broderbund (the creators of the Carmen Sandiego games) imbued it with. Even the title screen is amazing, with the stars and the quasi-3D shading on the temple columns. The colors are lush and the backgrounds are detailed and imaginative. Remember that this is an 8-bit system - so this is no small feat!

When starting, I was reminded of Kid Icarus on the grand scope that that game promises and the mythological atmosphere. Early in however, I realized that (like Kid Icarus) the promise of a mythological storyline was only a tease. This is only a cover to lure you in and be vague. There's no tour of ancient Greece or educational experience here; There's just a sad, beautiful mockery of it. I understand this is just a game, but most of the references didn't make sense as far as the items and bosses. This reminds me of Castlevania II: Simon's Quest in that it doesn't really follow the story of Castlevania and sort of twists the Dracula narrative in a way similar to the way this game twists the Greek mythos. You'll also be reminded of Simon's Quest during the townsfolk scenes. The obvious thing you'll notice if you're an experienced NES gamer is that this game is somewhat of a clone of Zelda II (or Simon's Quest, but the Zelda comparison is obvious). Like it's ancestor, the game-play is jump, slash, and block with a shield - and that's not necessarily a bad thing.

But Zelda II has more of a RPG-feel, and that's really saying something since the game gets a lot of flack for not being as story-intensive as the other Zelda games. Zelda II was more obvious as far as design too, unlike Battle of Olympus. While I want to give Battle of Olympus more credit (by virtue of persistent players), after going back and playing it (as well as watching a run-through online) I can't really. This is just a frustrating experience unless you've played it through before. I have to believe that back when this came out I'm sure it was very hard for the player to figure out what the heck to do (and maybe the manual helps, but the game-play shouldn't need such a crutch). Like with Simon's Quest, you're going to go back over your tracks over and over and find the advice of the townsfolk more annoying than helpful. Of course we live in the age of gamefaqs, so this is manageable. However, I can speak from experience that when this was the only game you got to rent over a weekend as a kid, you were not going to be happy for long.

Of course back when these games came out they were designed to be difficult on purpose (to extend game-play). But these days, difficulty is more of a hindrance than boon. As games have progressed, repetitive game-play and confusing level wandering just aren't fun. Despite this game being quite playable, I believe only the hardcore players finished the game (more from boredom and lack of direction than difficulty). This sort of game lends itself to selling the story and animation - two things the time period couldn't offer sufficiently.

So in short: For the bad, we have all the confusing item-collecting and nonsensical storyline of Simon's Quest paired with being a less-polished clone of Zelda II on the game-play end. On the positives, we have a game with memorable graphics, sound and a sort of quirky atmosphere. It's really a toss-up. I couldn't recommend this to a casual gamer, but I wouldn't warn anyone away from it. It's slightly better than the average NES game, but that's not really saying much. So I guess it gets a 5.5/10.
Review Page Hits: 0 today (750 total)
mediahook