The stellar combat, great graphics, and phenomenal presentation make this one of the greatest beat-em-up games ever. 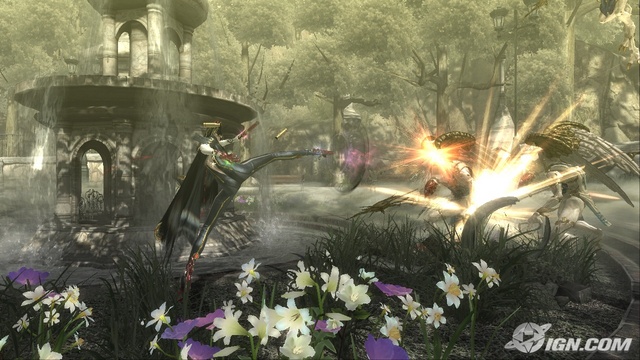 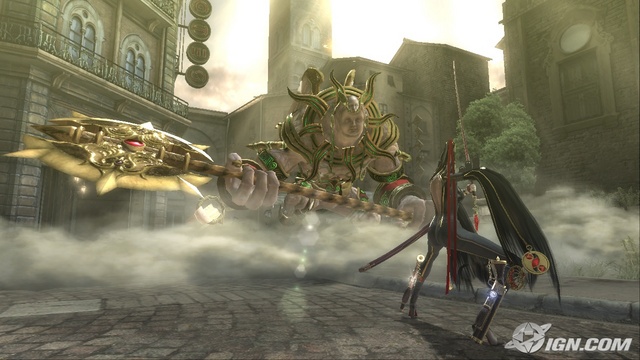 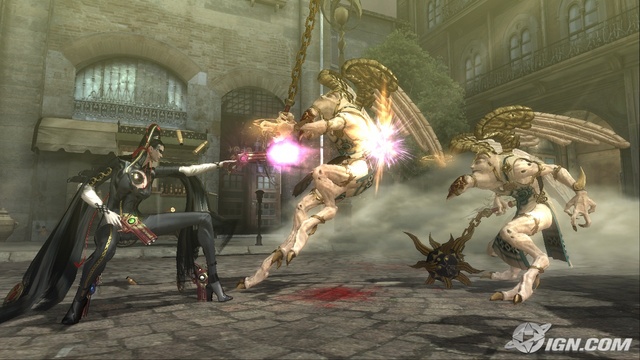 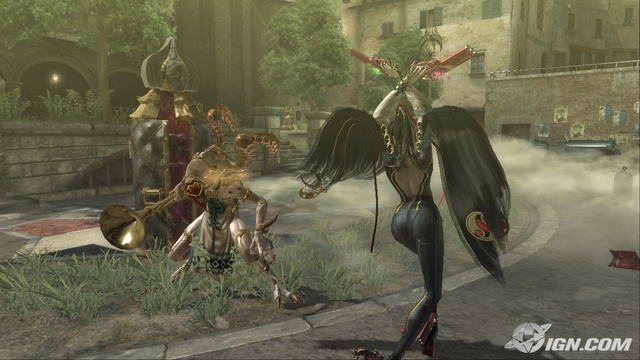 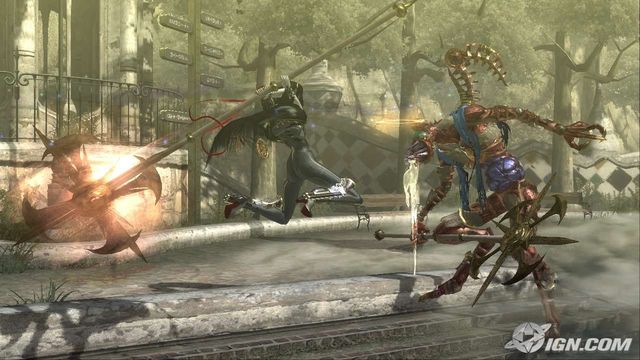 I'd heard great things about Bayonetta but traditionally I do not like beat-em-up style games. Devil May Cry I never got into, and I figured this would be a carbon copy of DMC. But on a whim I rented the game and within the first few minutes I was thankful that I did.

Graphically the game looks very sharp, the textures look clean and there is no tearing or frame rate drops throughout the game. The movements and impacts of combat look amazing. What stands out though is the attention paid to little details, it's what really set this game apart. Just walking through the world you'll notice little subtleties, such as your shadow isn't exactly... normal, or when landing from a jump little butterflies fly up from the ground around you, etc. You'll see little things that make you say "Wow, that was a neat idea!" and even though it isn't adding anything major to the game, it helps you appreciate just how much attention to atmospheric detail the developers wanted to add to the characters and environment. You may not even notice a lot of these at first, but graphically on both the macro level and the micro level this game does not fail to impress.

The sound is also great, although after you finish the game you'll be tired of hearing the song "Fly Me to the Moon" (which plays throughout the entire game). The sounds of combat are excellent with satisfying gunshots, impacts, decapitations, etc.

Bayonetta keeps the same overall fighting feel as Devil May Cry but adds its own twists to the mix. Unlike DMC you acquire new weapons as you progress throughout the game, each with its own different fighting style. On top of that you have a number of magical powers and attacks to aid you along your way, such as using your hair as a weapon called Wicked Weave, or transforming into various animals to help you traverse the game's obstacles. Finally, to finish off bosses you can call upon the Infernal Demons to aid you in combat, usually in grandiose fashion. These are way over the top but very cool to see!

Bayonetta cannot block, that simply would not suit a fighting Umbra witch, instead she simply chooses to dodge enemy attacks. All you need to do is pull the right trigger to dodge out of the way, but if you time it just right you enter what is called "Witch Time" where everything else moves extremely slowly for a few seconds. In combat this helps you get an edge on tough enemies, some of which cannot be damage outside of Witch Time. But outside of combat throughout the game's world you will need to use this power to overcome obstacles. For example, you're moving so quickly in Witch Time that you can walk on water or to run through a distant gate before it closes.

Where the game sets itself apart from the competition is in its presentation. The game flows perfectly from scene to scene; fighting is more like dancing than brawling with Bayonetta flowing from move to move with grace, slaughtering bad guys with ease. The story unfolds through a series of interestingly styled video clips where the characters are in still frame but the environment around them is in moving frame... it sounds odd but it's a neat idea. The end result of all of this coming together is more like playing through a movie than a game.

Speaking of movies, that may be one of my few gripes with the game. There are tons of video clips, many of which are simply of Bayonetta killing bad guys by the truckload. I don't want to watch her do it, I want to do it myself!

The only other gripe I have is that there are two levels in the game that simply do not fit.
There are two vehicular levels that are roughly on the level of something you'd see on an original Nintendo, they are extremely basic and honestly just don't feel right, nor are they fun.

Those are really the only gripes I have though, the game is absolutely solid through and through and there are few times that will take you out of the moment. Bayonetta is a phenomenal achievement in gaming that you have to play to appreciate. Even if you only rent it as I did, seeing it in action is something you'll need to experience at least once.
Review Page Hits: 0 today (216 total)
mediahook