A mediocre game that fails to rise above other bargain-bin games. 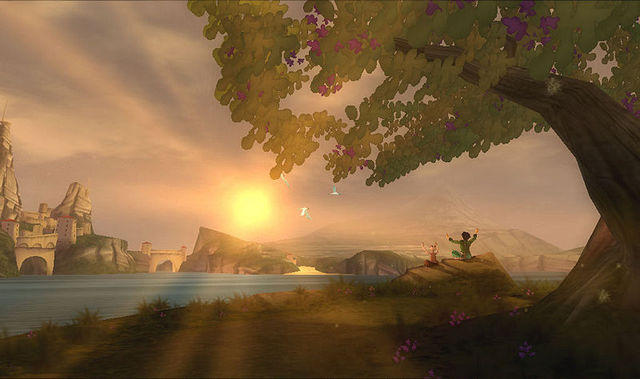 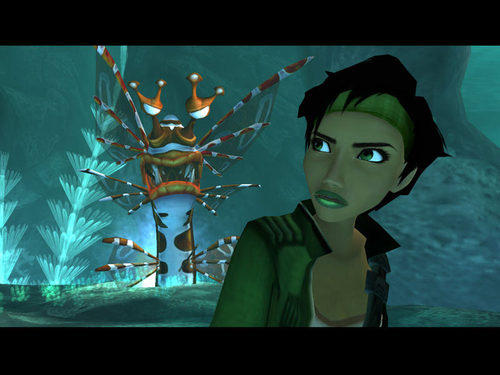 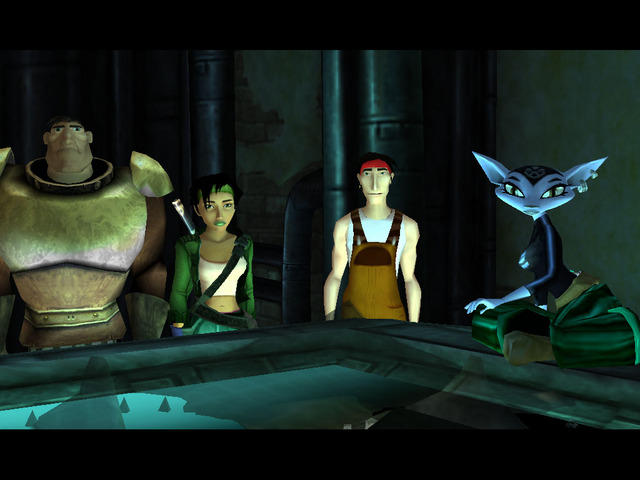 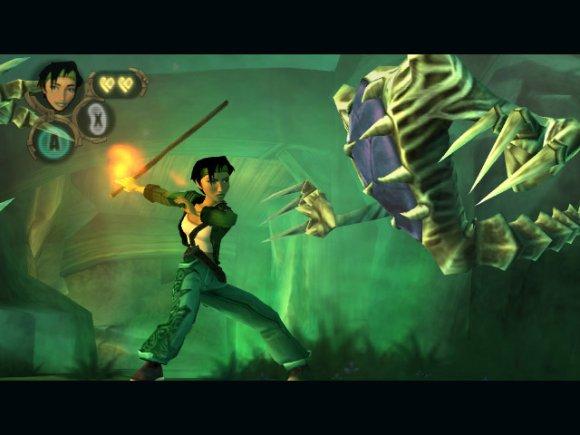 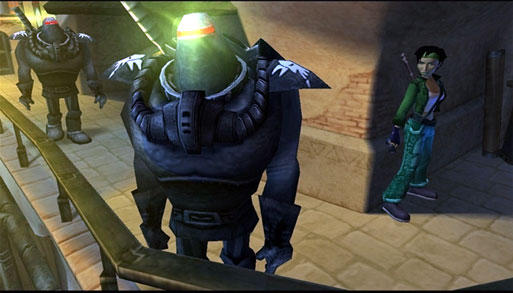 So this is Beyond Good and Evil. Apparently it is a really good game and should be played by everyone. While I agree that it is probably true, this does not apply to the PC version. There are several problems to it, and it is obvious it fails due to the fact that it was obviously ported from the console version to the PC.

So first thing is the aesthetics. The graphics are nice. Good water and smoke effects, and all the characters look unique and fitting to their mood. The sky looks nice too. It all looks very nice really, and the explosions work well. The music and sound effects are really done well too, and I simply love the voice acting. Unfortunately, my well-over-the-requirements PC could not play the game without substantial lag when the good effects kicked in, so sometimes it's hard to enjoy the graphics.

Now we get to the gameplay. This is where a good idea gets soured up by a few factors: 1) Way more stealth than is advertised. 2) A ridiculous learning curve for said stealth. And 3) The keyboard controls are terrible. In fact, the keyboard controls make it very obvious how much of a port this is. As for the stealth, it's a factor that is introduced with minimal training and throws you right into "avoid or die" situations. Difficult ones. The first stealth section I did took me a good hour to get through, and that's because the controls were hindering my ability to play something I had not been well trained for. Now, not all the game is stealth, as there are a few parts where you pilot a ship and some more action-y parts where you beat up enemies with your staff. Both of these parts work out alright, and the parts where you pilot a ship are really well done. They don't happen very often though. As for the action parts, they also are only there in the beginning and end of the game, like the bosses and exploring a few caves.

There's also a bit of a side-quest thing where you take pictures of animals for money, or credits, whatever they called it. You use these credits to buy items like health boosts which are really only helpful in action parts, cause you're practically dead if you try fighting in a stealth part. The camera controls are actually really nice, and I enjoyed capturing animals' pictures, because they are really well animated. Trying to snag a picture of a boss without dying was a nice challenge as well.

Another side-quest thing is the boat races. Yeah, you race boats against other people in an arena where the announcer uses so much fake profanity it's obnoxious. I ended up deciding that getting credits this way wasn't worth it, because I'd have to listen to his voice. The boat controls really well though, and when you get it out into the lake/ocean it's pretty fun, but I never liked the fact that you were limited to one lake/ocean and a somewhat annoying trench later on which is riddled with mines. Another part that needs more stealth than action.

Now, don't get me wrong, I'm pretty sure the game was designed with only 30% stealth, and the non-stealth parts are great. The problem was that they seemed to forget this little annoyance called difficulty. When I choose easy, I want a walk in the park. I don't want to struggle to survive on my 21st time through. I'm pretty sure other people have played as much stealth as was meant, but I had to restart stealth sections so many times I had almost every detail of the rooms memorized. No, that didn't help. Luck did. And if you struggle through 70% of the game with glitchy AI and detection, it tends to leave a bad taste in your mouth. Like when you eat chocolate and then a tangerine. It doesn't matter if you eat the same amount of tangerines as chocolate, those tangerines will still taste sour.

As for the story line, there's not much to say. It's not really that amazing, and people who have been graced with books like Ringworld will not be impressed very much (I wasn't.) I don't want to ruin much, but it's basically your standard conspiracy. I'm pretty sure 12 b-movies had the exact same plot. It has some great characters though, and their interactions really make an otherwise simple story line a little more interesting. Jade herself is a quite likable character, and there's no way you can forget Pey'J's voice. I can't reveal why without a spoiler, but let me say that this actually works against the storyline at one point.

One of the main things I liked most about the game was the DomZ. Aside from the fact that their name is basically doom with a missing 'o' and a capital 'z' for awesomeness, they're quite evil-looking and really hateable. They're sorta like the Borg from Star Trek in that respect. You hate them. A lot. They make a really good evil race, and their leader is a really awesome antagonist.

Now, I get the feeling Beyond Good and Evil is probably really good for consoles. But this is a situation where "console" and "computer" are not interchangeable because of the flaws created by (what at least seems to be from my playing experience) porting it to PC. Beyond Good and Evil is, on the PC at least, an example of mediocrity, and a good example of how NOT to design stealth sections. I say mediocrity because, although it looks, sounds, and at 30% of the time I spent playing sounds great, that other 70% of the time is painful, and makes me wish for nothing more than cheat codes. I can't think of a single stealth section I didn't have to replay about 7 times. It's that hard.

So the verdict is thus: If you want a videogame for bargain price with an okay sci-fi storyline, pick up Advent Rising. It's a lot better. If you want memorable characters, pick up Rayman 2, which was actually made by the same guy. Seriously. Wikipedia told me. If you want a good action-adventure game... look at this game for 30% of the time. Out of the two dollars I payed for this game, I think I only got 60 cents worth. Really, I don't recommend it. But again, this may only be the PC version.

So as the saying is paraphrased: Don't touch it with a 1 dm dollar bill. Do such things to Advent Rising instead.
Review Page Hits: 0 today (391 total)
mediahook