Beyond Good and Evil (Xbox)

Beyond Good & Evil has a great concept and borrows elements from other gaming greats of the past, but in the end it is just too short to be a truly fantastic game.... 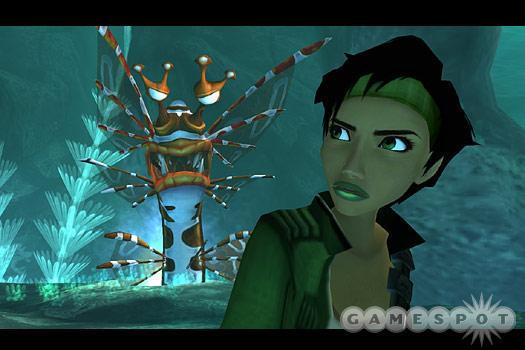 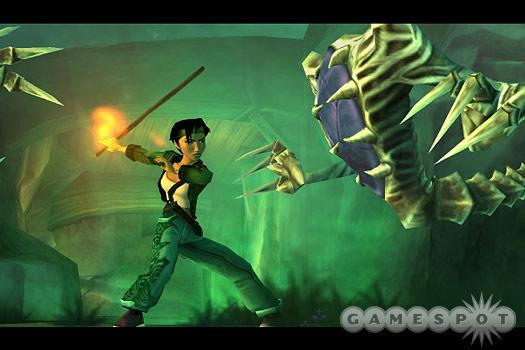 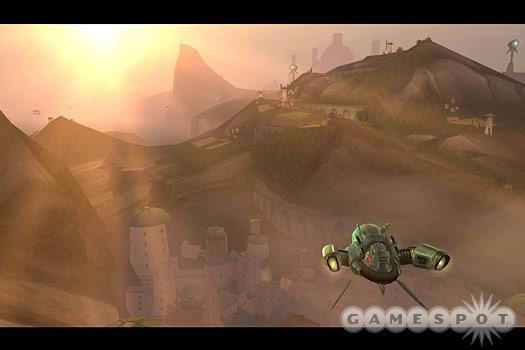 Beyond Good & Evil (called BG&E for now on) was a fantastic idea for an action/adventure game. Take the battle system of the newer Zelda games, then mix in Tomb Raider/Legacy of Kain style puzzles. Why don't we add a dash of Shenmue city exploration, conjure up a decent vehicle engine a-la halo, throw in some Splinter Cell stealth, and top it off with fantastic animated graphics and voice acting? Voilŕ, you have a blockbuster hit, right? Well, almost....

You start off as young orphaned girl named Jade (20 years old) who suddenly finds herself thrust into an intergalactic war between her people, the Hillians, and the evil DomZ. The Alpha section, a group of militant protectors of Hillys, are also wrapped up in this war, but are they really your friends, or your enemies as well? Along with her Uncle Pey'J (surprisingly a very large warthog/pig), Jade must uncover the secrets of what is truly going on in the world of Hillys and reveal it to the innocent people, using only her trusty camera and kung-fu skills. Sounds like fun, huh?

The gameplay consists of controlling Jade around the very beautiful backdrops of Hillys. You are able to interact with almost every person you encounter along the way, in order to find clues on where to go next. Early on in the game, you will acquire a hovercraft in order to travel between the different districts of Hillys. This hovercraft can be upgraded by trading special "pearls" you collect into a nearby shop. Throughout most of the game, you also have a secondary character who tags along with you and will help you find the next location to go to. It will also help you in the many stealth-like puzzle situations you'll find yourself in.

The graphics and sound in BG&E are just fantastic (for the Xbox version). The very colorful world of Hillys shines in vibrant colors and detailed animations of nearly everything around. Most of the character models are just gorgeous to behold and make the game a lot of fun to play. The sound and music consists of a variety of different tracks from alien "rap" to orchestrated action music, and it is all done very well.

The controls in BG&E are very fluid in game. They can get a little awkward in the menu screens because too many buttons to push. There are some strange item movement but nothing that detracts from the game too much. You'll rarely find yourself caught on background objects and traveling between point A and point B, don't feel all too tedious. But that is probably because the game is so short. The battle engine was taken almost directly from Zelda: Ocarina of Time, and is fairly well executed. But when it really comes down to it, it's just too easy, and comes down to merely mashing the buttons to defeat enemies. There is no apparent combo system aside from attack, attack, attack. The enemies themselves don't really have a very intelligent AI, as you can just leave a room and they'll have forgotten all about you. In addition to your regular staff attack, you also have a very useless charge uppercut attack which really has no use whatsoever considering the simplicity of battles. Along with battles, you are also asked to stealthily infiltrate various installations along the way in a simplistic Splinter Cell fashion. In fact, more than half the game consists of these stealth missions and they are actually a very fun part of the game, yet are nowhere near as complex as similar stealth games.

If you're expecting an epic experience from BG&E, then prepare to be disappointed. BG&E can be completed in less than 10 hours easily. The overworld may seem huge in the beginning, but you are really restricted on where you can go. The gameplay is fairly linear in that respect (Go to "A" to get this and then go to "B" and use it to get to "C") with very few side missions aside from using your camera to try and collect a picture of every living organism on the planet (which in the end isn't a very rewarding mission). I suppose the length of BG&E is a good thing though, because the fighting engine and exploration engines do become a bit boring after awhile and lack a certain depth of other similar games like Shenmue.

Overall, BG&E is a very well executed game with some great ideas. In the end, it makes up a fun and interesting game that is only flawed by it's lack of depth, compared to similar games it emulates. Add to that, the considerably easy difficult level is another weak point. Therefore, BG&E is less than the sum of it's individual parts and won't truly become a memorable title in the future. Considering this game can be bought for under $20 new now, I'd say it's well worth the experience to play another one of Ubisoft's growing library of well-made games.
Review Page Hits: 0 today (574 total)
mediahook