A solid sequel that tries too hard to justify itself 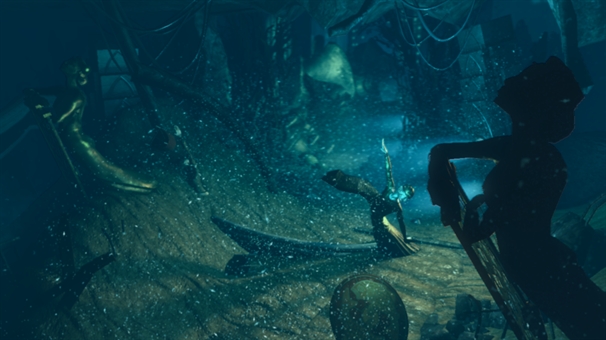 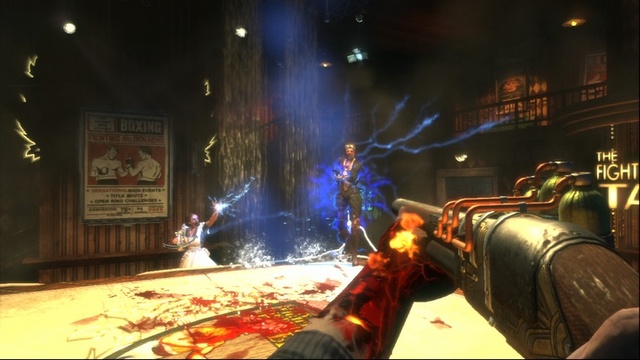 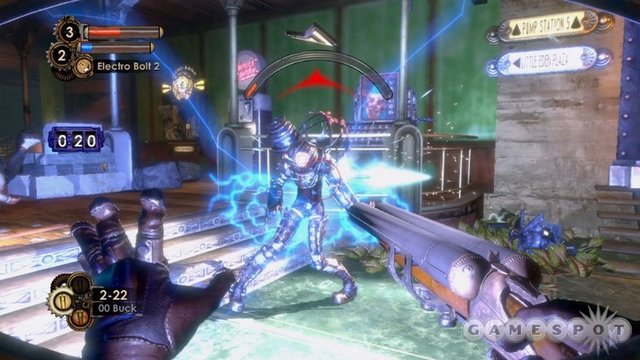 I had my reservations about a sequel to one of my favorite games of all time. It wasn't that I didn't want more, but four different developers, multiplayer, and how you continue the story of a game that didn't leave a cliffhanger worried me. Though Bioshock 2 does a lot to overcome these feelings, there are still some things that are frustrating about this game.

The technical aspects of Bioshock 2 are top notch. The graphics are great all the way around, and Rapture is still a creepy place, if somewhat familiar. It is very unsurprisingly similar to the original Bioshock, just slightly nicer details here and there that keep you immersed. For all the action that can happen on the screen at any given time, not once was there any frame rate issues, or choppiness or any other graphical faults with the game. It helps immersion and pacing when you can make a world look this good. Character models look very good as well, giving you a feeling that you are hurting people and helping others. The audio is very well done and it is a shame that the soundtrack isn't in CD form (I know you can buy it on Itunes or get the $100 special edition which gives you the soundtrack on a vinyl).

Without giving way too much of the story and characters, you play as a the original Big Daddy (known as Subject Delta) who sets out to find the little sister you use to protect. You learn details through audio logs and as you progress through the story, but it misses a thing or two that the original had. Its tough to follow up when a game had charismatic characters such as Andrew Ryan or very memorable ones like Atlas, and even Rapture, which kept me up for hours in the original just to see what was around the corner. Rapture now feels familiar, and the characters aren't as memorable as the original. It is an unfair criticism I know, but a game that is story heavy like Bioshock needs memorable characters to help move it forward. The characters are good in Bioshock 2 but they aren't great. Though it is nice to see the back story of how Andrew Ryan built Rapture and there are some excellent environments throughout the game.

The gameplay is where this game really shines. Playing as a Big Daddy is awesome, just something about being able to use the drill is amazing. Despite being a Big Daddy, you are vulnerable. It is explained why you are so vulnerable compared to the other big daddies, but I should be able to take down three regular splicers without much of a problem, not lose half of my health. While in a one on one situation (unless your fighting a Big Sister or Big Daddy on hard), you can't be beat. But this changes when you gather more ADAM from a little sister, you face many splicers on the screen. This is where the game truly shines. Like the original, using the environment to your advantage is key. Hacking cameras, turrets, etc helps not only in these situations, but fights versus Big Daddies and Big Sisters as well. Speaking of enemies, there are three new ones in Bioshock 2. While the Alpha Splicer is kind of weak in my opinion (use telekinesis), the rumbler Big Daddy is a solid addition and the Big Sister battles were fun and memorable, if predictable. I did feel proud when I defeated a Big Sister without having to use the Vitachamber (I played on hard my first time). The new plasmid system is also awesome with my personal favorite being the cyclone plasmid level three where you can have an enemy fly all the way across the room while being on fire (my favorite moment of the game). Also, dual wielding your plasmids and guns makes the combat feel much more satisfying than the original Bioshock.

Now, we move on to my least favorite part of the game, the multiplayer (MP). The MP takes place during the civil war between Ryan and Fontaine. While seemingly interesting, it didn't pull me into the story at all. So what is bad about the MP? The modes are a standard variety (deatchmatch, team deathmatch, etc.), but the maps weren't all that fun to play in. Also, a character can become a big daddy (specifically Rosie, so a rivet gun and proximity mines are at your disposal). In theory, that sounds awesome, and it is if YOU are the big daddy. If not, prepare to die. A lot. Part of taking down a big daddy in a single player is using the environment (turrets, cameras, etc.), but all a Big Daddy has to do is camp and it will be a while before they are taken down if at all . It is similar to Modern Warfare in that your leveling up gets you new plasmids, guns, etc to help make your character stronger. The best way to take down the big daddy player is to work as a team but most of the players were playing like they were in Modern Warfare 2, which is to say by themselves and not as a team. Also, the guns don't feel as powerful as they should be (they are exactly the same as the original Bioshock). One of the pros of the MP are the ability to hack turrets and vending machines. Although the best part of the MP is the capture the little sister mode. Its basically capture the flag but a little sister instead of a flag. So despite this awesome mode, there wasn't a lot of motivation to come back to the mp especially with games like Uncharted 2, Modern Warfare 2, Borderlands, etc have terrific MP that you want to go back to.

The DLC promised from 2K has been both MP and single player content. They have released all MP content thus far and I would like to see what they do with single player content. The Sinclair solutions just adds anesthetic appeal to your character. They are also adding a new mode (Would you kindly?) which is free, and a map pack that increases the level cap to 50 and eight new maps for 800 points or $10.00.

It is nice to see that Bioshock 2 turned out to be a very good game, and I don't regret spending my money on it, but it could have been a great game. It is a shame because this game tries to justify itself as a full on sequel while it feels more like an expansion pack. If you want more Rapture back story combined with awesome gameplay and a good but not great story, get this game.
Review Page Hits: 0 today (587 total)
mediahook