Somewhere, under the sea, Rapture is waiting for me ... only thing left, is to escape alive, with my soul intact! 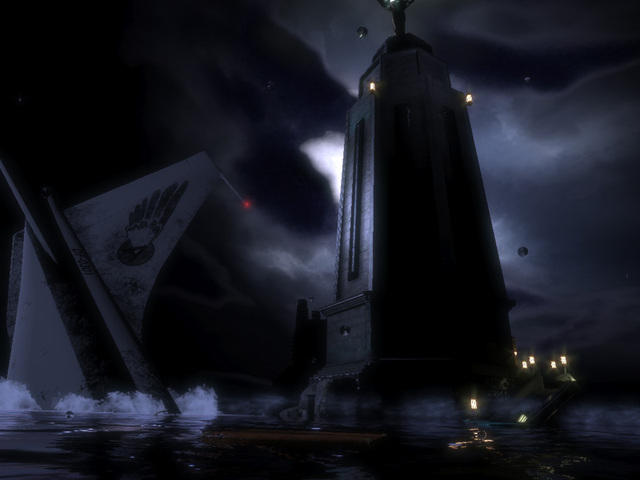 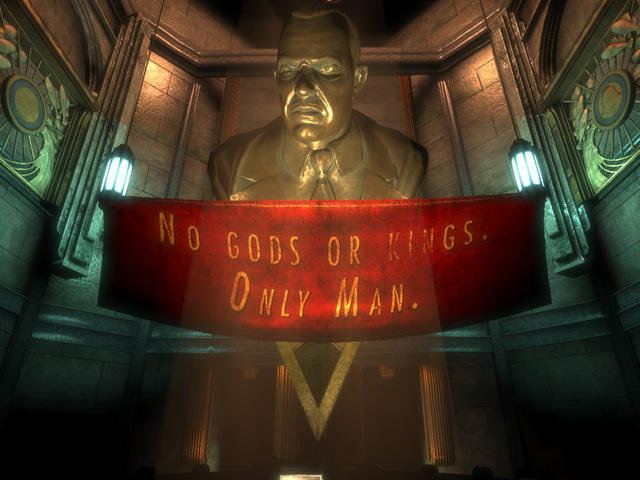 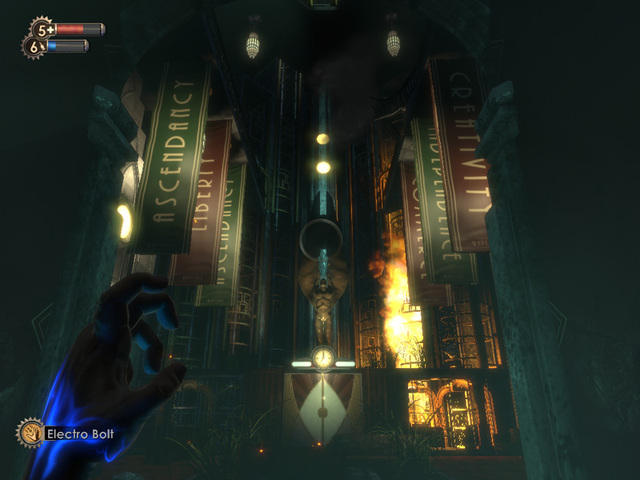 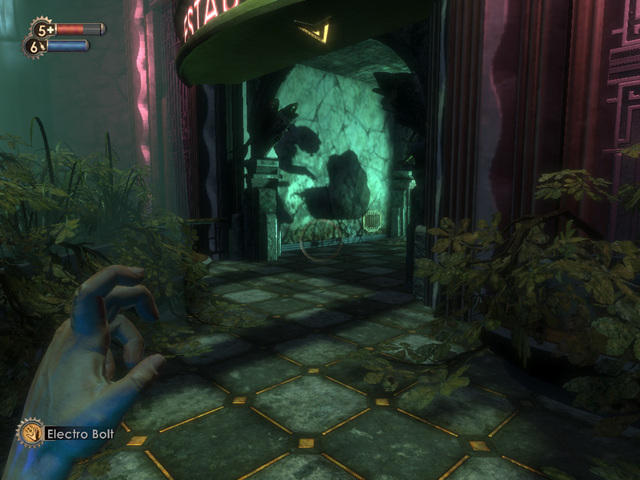 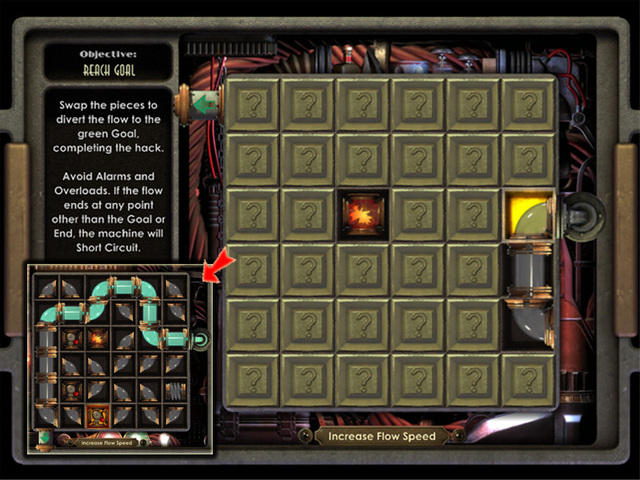 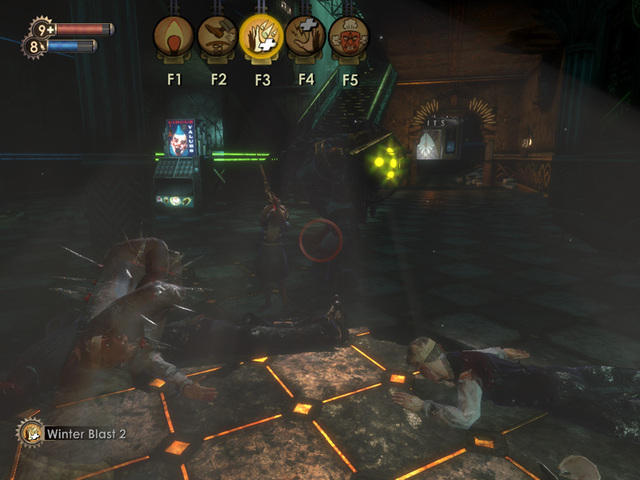 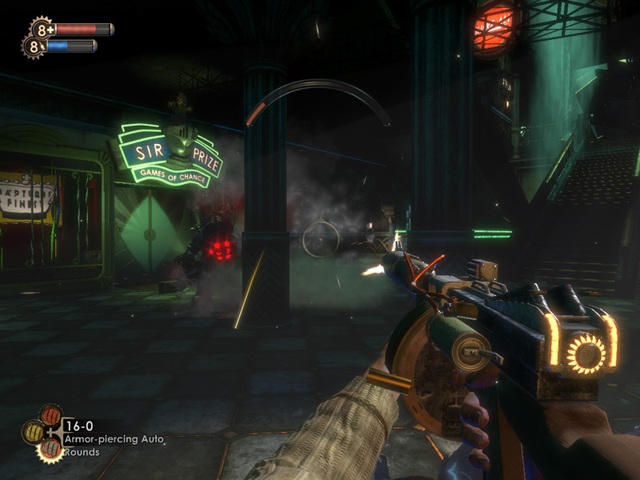 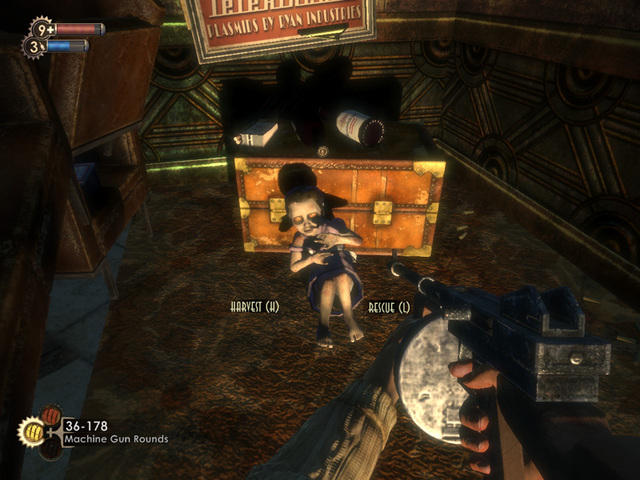 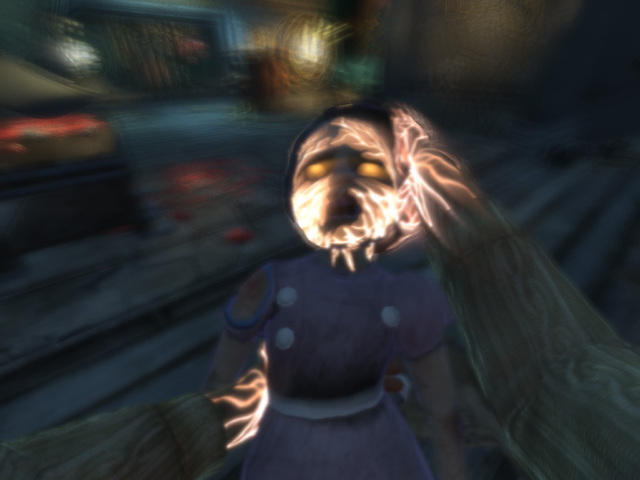 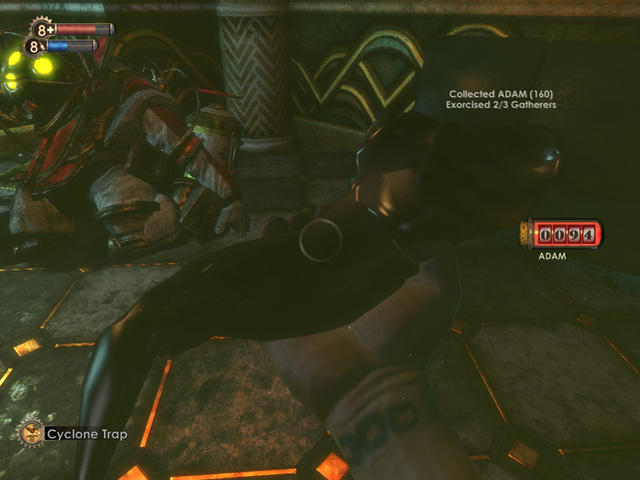 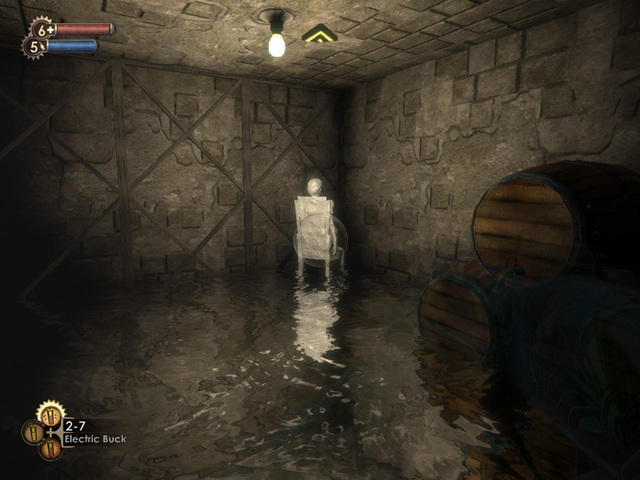 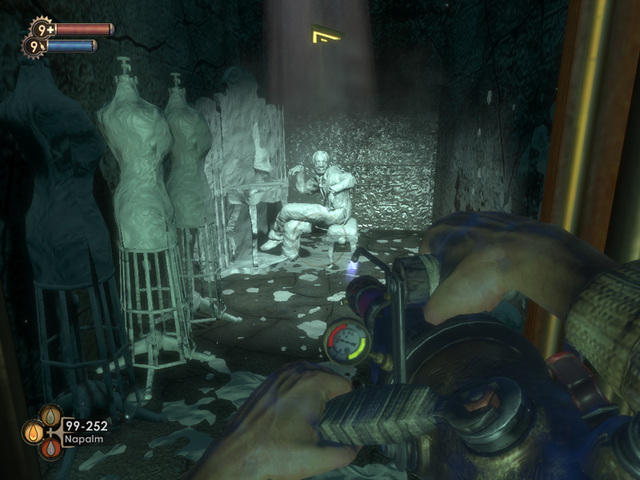 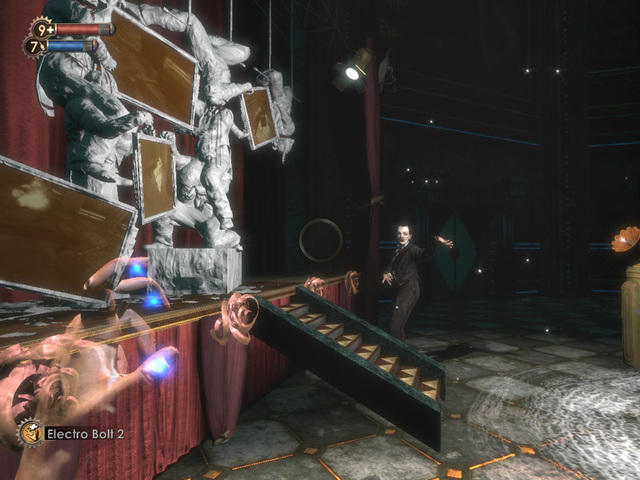 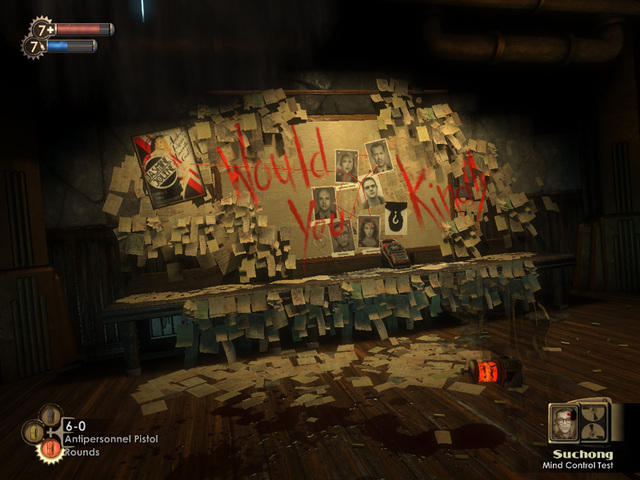 I can see this game opening a whole can of worms, with huge implications on a hotly debated subject, genetic modifications! The debate is endless; but you have to remember this is just a game, a work of fiction.

And what a game! What a piece of fiction, in all its beautiful glory. This beauty comes at a price, however, for the storyline and for your computer's processor. The story is the familiar "man is his own demise" yarn, where in a small place called Rapture, man can be man without fear of being judged by God.

Supposedly, there are no more original story lines, that the best writers can hope for is to re-invent existing ones. While the myth may have a hint of truth, Bioshock's story has a damn good, unique freshness to it. This is not like any FPS you have played before.

I am just aching to tell you how it all ends, but that would spoil the marvel of this story. In fact, I was even surprised at the twists and turns in this plot, and I am fairly hard to surprise. It just goes to show you that sometimes, more writers are better. This game boasts one main writer and creator, Ken Levine, plus six extra story writers.

The basic story of Rapture is that it is a place with no ethical obstructions. This is a place where man can create without morals, governments and even God to hold him back. However, you find that something has gone wrong and the utopia has fallen, leaving your objective to make it out alive.

In this type of world, man has accomplished many great scientific achievements. The most notable is genetic modifications called plasmids, which have their own life source, called Adam. If I compared this game to a Sorcery and Magic game, Adam would be mana, Eve would be the thing that tops up your mana bar, and plasmids are the spells.

Humanity takes on a different meaning. As you are aware, the genetic modifications that destroyed this utopia are the same you are using to modify yourself. The plasmids you use, however, and are really fun to play around with and give you a great sense of power. And this is the trade off; I love using these plasmids, but I may pay for it later!

On a side note, I remember the first time I used the telekinesis plasmid. This allows you to pick up items and hurl them at baddies. This one enemy, called a Splicer, was dressed as a nurse when it jumped out on me. In my "quick reactive state," I pulled the hat off her head and threw it back 20 times faster. While not deadly, it did knock her off her feet, just long enough to arm myself and finish her off.

However, this is not your only means of defense, there are also standard 1950s weapons, my favorite being the good old fashioned Tommy Gun! Some weapons also have an equivalent plasmid variation. While you might be right in thinking this just is a rehash, the answer is not so clear cut. It's all about choice and the next level question "do I have one?" As foes can be dispatched in many different ways, but there are good ways and bad ways. In the beginning level you may not see this. But you will become your most creative when you start to run out of ammo and find different and interesting ways of killing them. By the end of Bioshock, you will become a one man army, with an impressive array of dealing easy death, even to the most challenging of opponents.

One of your weapons is a camera, given to you to take pictures of the baddies, for research purposes. While a novel idea, it is extremely annoying at first. As each picture you take, points out the weakness of the subject. However the first few pictures give out some really mocking quotes "Shoot them in the head to deal more damage" or "Use anti-armor bullets against armored targets". My advice with the camera is to stick with it; eventually it will pay off and the hints do get better!

The funniest thing is to sprint up to a baddie and take a picture close up, especially if they have not seen you. If you take the picture at the right moment and have startled him/her, the results are very funny as you capture a shocked Splicer.

The items used in Rapture are supplied through vending machines. I am sure there is some metaphor behind this; actually everywhere you look in Rapture is a metaphor. Vending machines are also hackable, giving you cheap prices and opening up special items. The hack comes in the form of a simple tube puzzle, where you guide the flowing liquid from one end to another.

Weapons are modifiable, through another vending machine called "Power to the People". However you can only use the machine once and there are only two alterations per weapon. Which I find is one of the minor flaws with this game. I would have liked to seen more mods for each weapon, so that different people playing this game would have come out with hugely different weapons.

But one of the most interesting factors of Bioshock is the characters, and this is the key point of any story. The first friend you meet is Atlas, an Irishman who requires your help saving his family. But as the story moves on you find yourself trusting his word less. Then there is Tenebaum, a German geneticist during WW II, who escaped her war crimes to continue her experiments in peace. And while you don't trust her in the beginning, as the story progresses, you find yourself warming to her.

Then there is Andrew Ryan and Frank Fontaine, in their power struggle for Rapture. Ryan the founder of Rapture, while Fontaine a criminal who controls Adam. Each trying to get one up-man-ship, which leads to their and Raptures doom.
There are very few different types of baddies in this game, the majority are different versions of Splicers. Splicers are the inhabitants of Rapture that have over used plasmids and gone crazy. However his is just the way Ryan wanted them.

Then there are the Big Daddies, who are the protectors of the Little Sisters. The little sisters, a creation of Tenebaum, are the extractors and producers of Adam. In short it means that they drink the blood of saturated Splicers and filter it through their livers. Their relationship is a strange, scary and fascinating one. When one of these big, heavily armored, ground shuddering deep-sea divers come stomping through, you can see the emotional involvement between the two characters. Though both are evil in design, to each other they are very gentle and loving by nature. This is so evident when you remove the Little Sisters from the picture and the Big Daddies start to mope around looking for their companion. You almost feel sorry for him, but for the fact that they are tough critters to kill. And the same is true when you kill a Big Daddy, as the Little Sister sits at his feet begging "Get up Mr. Bubbles, get up!"

As you progress through the levels, you will find yourself becoming more confident at dispatching Big Daddies. But what will really get to you is that at times you will realize it's not worth it and cautiously avoid them, with a hint of fear and a lot of respect! Even when you finally do decide to attack, plans are necessary, like a change of ammo and a fresh pair of pants.

If all goes well, you are presented with a moral choice. You have the Little Sister in your sight, what are you going to do? You need the Adam she has, and there are two ways of getting it. Kill her and eat her liver, you get maximum amount of Adam. Exorcise her, and get some Adam, but still retain that fuzzy feeling inside that says you are still human.

It's your choice! I know it's just a game, but to create that emotion between the void that is your computer and you is a rare quality in games. And I have only killed her twice, each time it was just to get pictures for this review. But you know what, I regretted each time, and reloaded afterwards. Even though she does look a little freaky as a human!

On a gameplay note, this game has one of the best AIs I have ever seen. You know in FPS shooters, where you spot that little barrier, and think to your self "If I get the bad guy to walk in there, he be stuck, then I can shoot him at my pleasure!" Well it just so happened that the same circumstance happened in Bioshock, I thought if the Big Daddy walks in there the computer won't figure it out and I can kill him.

It's the little things, but when it happened, god I was amazed. No, the Big Daddy didn't get stuck; he did something a human would. He took a few steps back and walked around the barrier. While I still managed to kill it, it was, dare I say it, the most satisfying AI kill I have ever had since Battlefield 2. On this premise, I decided to test this out further, there was a level with a staircase, so I thought I would hide underneath it and shoot at another Big Daddy. This too passed the AI test, as the Big Daddy was too big to fit under the stairs to get me. What he did instead of standing out in the open constantly trying to get me, was to climb to the top of the stairs and wait for me to come out.

Now the hunter was being hunted, and boy did that notion amaze me!

Out of the minor issues in this game, only two stick out. First are the high requirements needed for this game! What a shame, if there was even one thing to do before you die, this and threesomes would be up there at the top. If you don't have the requirements on the PC, but have an X-Box 360, please don't miss out. While the graphics may not be as good as the PC, this is something not to be missed.

And secondly; the ending, all the beauty and magic of this game is in the first part and the middle. I can't put my finger on what it is, but there will be a small moment towards the end when it starts to lose its sparkle. Don't get me wrong, the ending is good, if somewhat predictable. But there is a certain lacking of "je ne c'est que!" that has been the norm throughout the game.

This is one of the oddest reviews I have ever had to write. I have told you everything without telling you anything. I seriously want to tell you everything and more, but it would only spoil the game for you. To leave it here may not convey everything I want, but hopefully you will understand the masterpiece that is Bioshock. But most of all I hope you do get this game and play it at one stage in your life.

I could go on and on about this game, but I'll leave you with the one simple thought. "Rapture is a utopia, where great men, with no reprisal of actions and no morals, are not held back by the small. So shoot everyone and let God decide!"