Fun with four but only fair with one, Blast Chamber is more of a "pop" than a "boom". 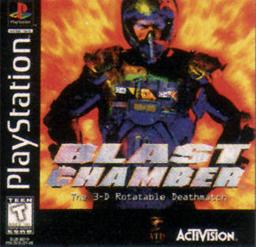 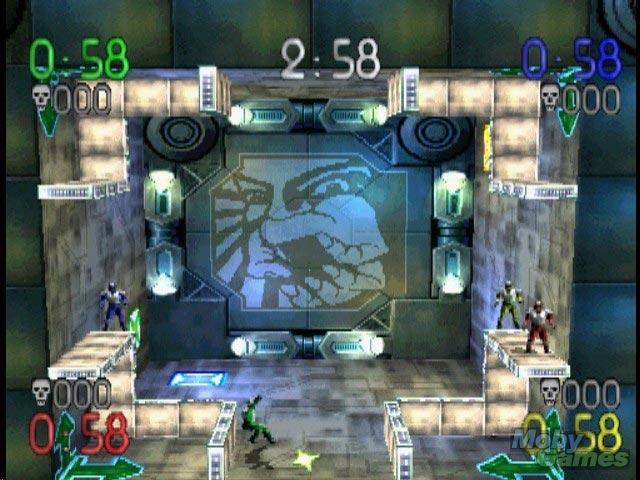 Science fiction authors seem to think it will take us nearly a century to discover that baseball and golf simply are not as entertaining as blowing each other up in a high-stakes deathmatch. For the time being, however, many game developers found solace in depicting their own twisted vision of such future sports and the destruction found therein. In the case of ATD's Blast Chamber, the citizens of the world tune in to watch four competitors with time bombs strapped to their chest as they race against the clock - and each other - to deposit special crystals in their corresponding reactors.

What could possibly go wrong?

The arenas in Blast Chamber are giant cubes about which various hazards and power-ups are scattered. The hazards include such violence-friendly fare as trap doors, spiked platforms, and plasma clouds that can instantly melt a combatant. The power-ups include increased speed, increased jump height, and a magnet that attracts the crystal from any point within the chamber. These toys occasionally reach wacky levels of creativity, but for the most part, it is standard fare. Things get interesting, however, when the arenas include the ability to rotate the chamber by pressing against a glowing "Kicker" installed on the walls. When a player activates a Kicker, the in-play crystal and all other players fall with a resounding thud onto what has now become the floor. This game mechanic opens up a very welcome level of complexity, inviting the player to booby trap their opponents with a well-placed rotation, or rewarding them with a few precious seconds to execute their next move before their opponents regain their footing.

Blast Chamber's single player mode is a series of sixty chambers of ascending difficulty. Your opponents are notably absent in this mode, making it purely a race against the clock to deposit your crystal in a reactor before the timer on your chest plate expires. The hazards in this mode tend to be very unforgiving for all but the first ten levels. As a result, playing through this mode feels like solving one big puzzle with trial and error being the only key to progressing further. This would not be a problem if ATD allowed players to save every level instead of every five levels, or if the time it took to return to the title screen and load your previous game was measured in seconds instead of minutes. This sort of save structure is understandable for a fast-paced platformer or action game, but Blast Chamber's experimentation-heavy single-player mode is more an exercise in patience than a reflex-oriented twitch fest. The current structure is unnecessarily cruel.

Fortunately, the game's saving grace is its two multiplayer modes. In a multiplayer match, up to four players share an arena and attempt to gain control of a single crystal. Holding the crystal stops your timer. Depositing the crystal in your assigned reactor increases the time remaining. Depositing it in someone else's reactor, however, decreases their time remaining and brings them ever closer to their demise. Free-for-All is a contest to see who can be blown to bits the fewest number of times in a set period, while Eliminator is a traditional "last man standing" match where the last combatant to blow up is the winner. Both modes also come with a Tournament mode in which each of the twenty available multiplayer stages is played one after the other with points awarded at the end of each round. The player with the most points at the end of the tournament is the victor.

Put simply, the multiplayer modes in Blast Chamber are a blast (pun intended). The CPU-controlled opponents behave as one would expect, being neither too dumb nor too unforgiving. The developers made the wise choice of implementing Multitap support, so grabbing three other friends and working your way up a tournament ladder is very satisfying. Early stages focus on crystal collection and learning to rotate the chamber effectively. Later stages are all about figuring out how to use each chamber's environment and traps to your advantage. Most chambers, however, are difficult to conquer completely or permanently. While one player may have been the first to reach the switch that activates a plasma cloud, for example, another player can quickly turn the tide if they make it to a Kicker and force the original player to lose their bearings. There will be thrown controllers, dead arms, and psychological warfare ("Hey, why are you putting the crystal in my reactor? Go for Blue instead!"); and raising the difficulty level to increase penalties and add splash damage will accentuate this even further.

It is such a shame, therefore, that a game concept with so much potential has been shrouded with such a poorly-developed package. Blast Chamber is not a pretty game. Camera controls are limited to assorted fullscreen views; not a big issue for multiplayer matches where being able to see all your opponents is crucial. With the single player mode, however, it is suicide to be zoomed too far out to see each chamber's individual intricacies. Despite efforts to make the game feel futuristic and colorful, the end result is a fuzziness that makes it appear as if it is being viewed a Vaseline-coated lens. This lack of sharpness extends even further to the physics and controls which are - once again - adequate for multiplayer but far too loose for what the single player mode demands. There are many moments where your tiny character will appear suspended in mid-air or attempt an attack or a rotation, only to be caught by some invisible corner and abort the move before it completes. ATD proved with Rollcage a few years later that they were capable of developing fast-paced titles with sharp 3D graphics. We can only conclude, therefore, that Blast Chamber was a victim of the PlayStation's early limitations.

For the most part, the sound effects and soundtrack follow suit with the graphics, attempting to be nearly adequate instead of truly fitting. The soundtrack comes in the form of over twenty short electronic tunes that play randomly as the game progresses. While these tracks serve to remind the user that Blast Chamber is supposed to exist a hundred years in the future, it does not do much to capture the feeling that the four drones in the chamber are all seconds away of becoming multi-colored Chunky soup. Some faster-paced, higher-energy tracks - licensed or otherwise - would have helped. The sound effects, however, are just short of being a lost cause. Aside from being painfully low-fidelity, most effects are too generic to be worth mentioning. A female announcer provides a bare bones play-by-play, stating power-up names and counting down to a player's demise. But considering the game is all about blowing up your opponents, she seems unnervingly calm and out-of-place.

It is hard to say whether the PlayStation was not ready for Blast Chamber, or if Blast Chamber was not ready for the PlayStation. This is a game concept that seems like excellent multiplayer fodder for the Xbox Live Arcade, PlayStation Store, or other modern platform. As a game released during the second year of the PlayStation's lifecycle, however, it comes off as remarkably uninspiring. In fact, if not for the terrific multiplayer modes and Multitap support, it would have been hard to see any potential in the game at all. A new soundtrack and a physics engine that had spent a little more time in the oven could have earned this title a spot on Sony's Greatest Hits list. As is, the multiplayer mode is carrying a title that feels unfinished or unpolished, no matter how you rotate it.
Review Page Hits: 0 today (304 total)
mediahook