Blast Chamber is a blast with a capital "B"...literally. 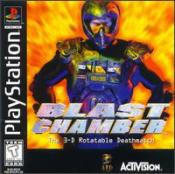 The year is 2096 and you've been genetically transformed into a superhuman combatant; the only home you know is the stable, an intense training complex. You're being prepared for ~The Game, an unknown competition between rival stables. You've been excluded from society for one simple reason: the spectator sport known as Blast Chamber. Owned by the stable's manager, you're fresh meat in a highly dangerous sport involving fast-paced action and life ending explosions. Should you claim victory, you may have a shot at freedom...

Blast Chamber features sixty levels set throughout rotational 3D chambers. As the chamber moves, the floor becomes a wall and the walls turn into ceilings and floors. The objective of each level is to obtain the crystal within the allotted time and before your competition to progress to the next chamber and avoid a rather gruesome death.

There are three different gameplay options. The Solo Survivor is a single player romp featuring forty unique chambers in a race against the clock to maneuver up and down steps, throw switches that alter the playing field, and avoid hazards. Your only enemy is the dwindling time on the clock; if you fail to obtain the crystal when the clock strikes zero, its lights out for you Supporting four human players via a Multi-Tap adapter, the Eliminator mode is a one shot deal. Incorporating a tournament ladder, you're presented with one opportunity to obtain the crystal; if you fail, you're out of the game ... permanently. The Free-For-All mode is a little more forgiving. The objective of this mode is to die as little as possible within the given time period. In the event you die, you're immediately resurrected. Whichever player has died the least at the end of the game wins.

Costly obstacles, hazards, and power-up items riddle chambers. Avoid spike pits, ultra-hot lava and deadly laser beams, with new hazards constantly presenting themselves as the chamber constantly rotates. The promoters of the television series aren't totally cruel; they've provided the contestants with magnetic boots, bombs, and magnets that nab the crystal. Do you have what it takes to survive the Blast Chamber? Only time will tell
Review Page Hits: 0 today (1,159 total)
mediahook