Though not without its flaws, Blasto is a fun and lighthearted superhero parody... and it's got Phil Hartman voice acting! 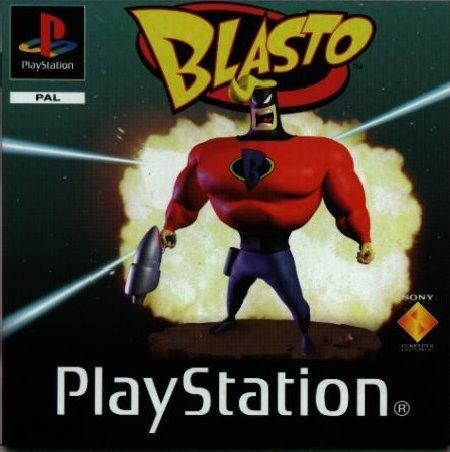 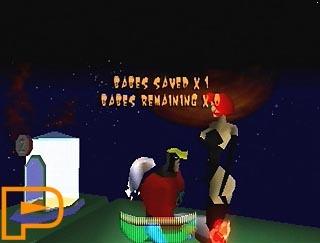 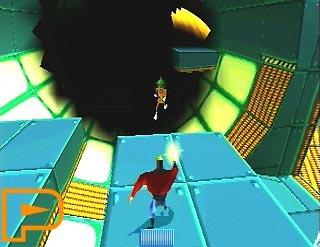 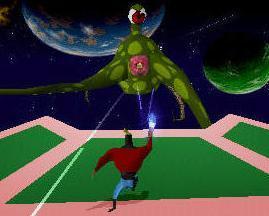 The whole game is a lighthearted superhero parody, starring Blasto, a wide-shouldered, beefy superhero with a seriously inflated ego. When the Bosc alien species (little green aliens with pear-shaped heads) punches a hole in the space-time continuum to escape the fifth dimension and take revenge on the humans that put them there, the humans call on Blasto (ta-daa!) to save them. But the recurring line is that Blasto is out to save Uranus. Though this makes no sense at all (wouldn't humans be on Earth?), it makes for some good Beavis and Butthead-esque jokes ("Uranus is on the line!" "Yeah, so what else is new?").

Speaking of jokes, Blasto is voiced by Phil Hartman, of The Simpsons and Saturday Night Live fame. This is truly the reason to buy this game, because though the game is playable, the gameplay is nothing special. The controls are a bit strange, but once you get used to the scheme, they work okay. It works like this: the left analog stick not only controls Blasto's movement, but the camera as well. This means that the camera is always positioned behind Blasto. Then, the square, triangle, circle, and x buttons control firing, action, special fire, and jump, respectively (also, the corresponding direction on the right stick can be used for these functions). All in all, this is fairly hard to get used to. Think of the lock-strafe controls of Ratchet: Deadlocked, but with the analog functions mashed together. This is not helped by the fact that Blasto controls about as gracefully as a Scorpion Tank. Luckily, a handy function for hopping back and spinning around is included to narrow Blasto's wide turning range a bit. The problem with this scheme, if it isn't obvious, is that now, people are accustomed to using the left stick for movement and the right stick for camera (or at least the shoulder buttons). Even once you're used to it (which wasn't too long for me, but I'm a veteran

), there are still some seriously problematic jumps to be made on which you will most certainly die. As far as I've played, the levels consist of floating walkway things in space. Oh, excuse me--space stations. But as annoying as jumping on narrow moving platforms or bouncy things to get from area to area is, I often found myself having fun shooting it out with obnoxious aliens and picking up power-ups. And that fun was only increased by Phil Hartman's funny voiceovers.

And now for a brief look at the graphics. It's important that you recognize that this is a PSone title and not Final Fantasy 9 either. What I'm saying is, it's not too pretty. While the opening FMVs look quite nice, in-game graphics are rather lacking by current standards. Blasto's shadow is surrounded by an immense rectangle of lighter shadow, and the "more complex" textures shift around a lot as you move (people who play last-gen games will know what I mean). Most items don't have this problem, luckily, because they have a nice, simple, single-color texture. However, this look serves the game fairly well, giving it a look that's almost as cartoony as cel-shading. Also, the draw distance (how close you have to be to things to be able to see them--low draw distance="pop-up") is criminally low, but amazingly never causes too many problems other than unawareness of faraway, possibly secret areas. But hey, that's just the way it was back then. If you can't stand a game if it doesn't look perfectly up-to-date, then you are out of luck here. But if you don't mind the fact that this is what many games looked like then, Blasto is bound to serve up a steamin' hot dollop of amusement.


NOTE: An older, slightly different version of this review can also be found at my blog, parkavenger.blog-city.com. Just wanted to make sure no one contacted me about copyright infringement :)
Review Page Hits: 0 today (431 total)
mediahook