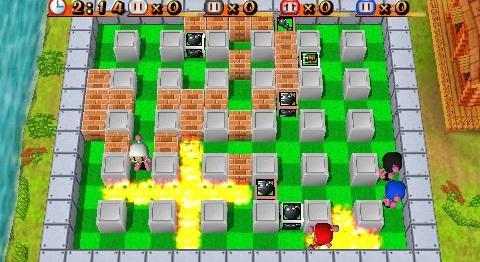 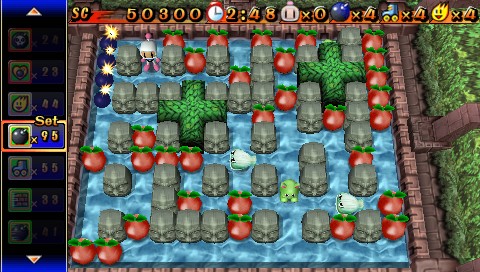 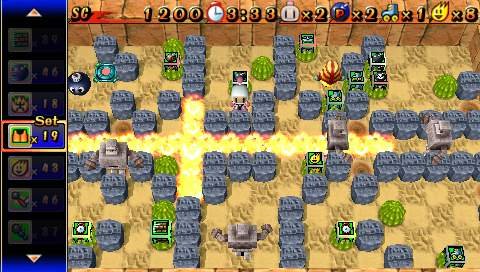 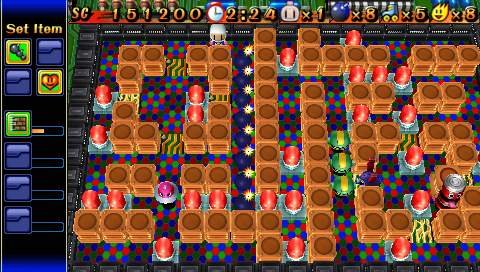 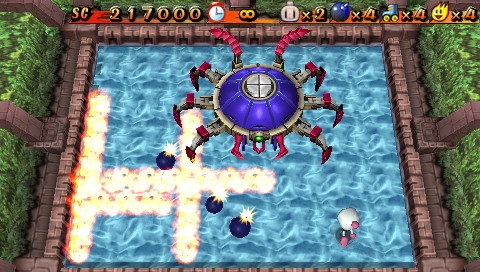 Like another popular 'Man in gaming, Bomberman once had so many games that were coming out at once that they were overflowing out of that poofy thing that comes out of his head. However, like Capcom's Mega Man, Bomberman's best days are seemingly behind him with no new releases in sight. Still, that doesn't mean I can't explore his vast library and entertain myself, right? That's exactly the point of checking out the PlayStation Portable version of Bomberman, simply titled... well... Bomberman! Is it a blast or a dud?

Bomberman's PSP outing features two main solo modes to enjoy: the first is Normal Mode, while the second unlocks after the former has been completed. This mode is Classic, and it pits you against 50 increasingly more difficult levels.

Normal Mode is essentially the same as Classic, save that it has 100 levels total spread across 10 worlds. Each world houses its own gimmick, whether it is the Jungle World's network of pipes that can be walked through, yet can also house enemies, or the Desert World's transporter system.

The main aim of each of these modes is the same: to eliminate all enemies within each level and reach the goal, hidden in one of the bomb-able soft blocks. This is harder than you might think because the AI is relatively smart. Enemies won't just stand there while you set bombs up next to them. They might hide in a safe haven away from the cross-shaped explosion pattern of Bomberman's bombs. Not only do you have to destroy the soft blocks that stand in Bomberman's path in order to make it to the enemies in a level, but you have to blow them up without torching your own rear end.

Normal Mode also differs from Classic because in Normal Mode, you can collect different item icons from destroyed soft blocks, cycle through them with the shoulder buttons, and use them whenever you want. Some items stay with you as long as you stay alive, such as additional bombs that can be set on screen at the same time, bigger explosion patterns, and faster movement for Bomberman. Other items are only active for one level, such as remote-controlled bombs that explode with a press of a button or being able to walk through soft blocks. Then there are items that are just temporary like the ability to weather bomb explosions or granting Bomberman an extra hit from an enemy or bomb that would otherwise be a loss of life. With Classic Mode, you have a set amount of lives to get through all 50 levels, and the items you collect are instantly bestowed onto Bomberman. Unlike Normal Mode, when you die, the effects of your collected items aren't removed, so it's very RPG-like in building Bomberman's stats.

The first nine levels of each world in Normal Mode are typical "destroy-all-enemies" affairs, while the tenth level pits you and Bomberman against a boss of some variety, These encounters are generally enjoyable with patterns you need to watch out for, and show a lot of creativity. These boss battles mix things up greatly as otherwise the PSP version of Bomberman might feel a bit too repetitive, despite the game changing up the obstacles and gimmicks with each new world you visit.

In each fifth level of a world, you have the optional task (well, it's mandatory if you want to reach the tenth world) of collecting a key. This spawns from doing a variety of tasks that is dependent on the world: defeating all enemies, blowing up all soft blocks, or bombing the goal (something I didn't pick up on in the ninth world, wondering where the heck that blasted key was!). Collecting all of the keys in the first nine worlds unlocks the final series of ten levels.

Any Bomberman game worth its weight in bombs has to have a compelling multiplayer piece to it. After all, that's what this franchise is most known for, it's extensive and explosive multiplayer. In this PSP version, you have the ability to play with up to four PSP systems either with multiple copies of the game or through game sharing. It's important to note that this multiplayer is only available via Ad Hoc mode.

Regardless, the battle mode in this PSP version is robust and quite customizable, to say the least. You can set the AI difficulty (for if you are just by your lonesome), how many rounds, whether revenge mode and sudden death are on, which items are to be included, and whether you wish to play in teams or not. The amount of arenas is sizable, though many feature the same environments. Still, if you're looking for an excellent on-the-go multiplayer Bomberman, you'll get that and more with Bomberman on PSP.

Bomberman's PSP game uses competent 3D models for its characters, enemies, and environments. It all looks rather nice, and I have no complaints. The game also runs at a smooth clip, so there's never any case of accidentally blowing yourself up due to any frame-rate hitching. The music featured in Bomberman fits each world it's played in, and many times it got me to bop my head along to it.

Overall, Bomberman on PSP delights with its single player modes, though limited in replay value. Its multiplayer is where the game truly shines in its longevity, offering a multitude of modes and options to customize your multiplayer matches however you see fit. For its cheap price nowadays, Bomberman is an excellent, explosive romp that is ultimately a blast. That concludes not only my judgment of Bomberman, but also the bomb pun portion of this review.
Review Page Hits: 0 today (887 total)
mediahook