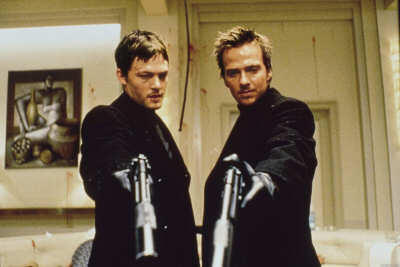 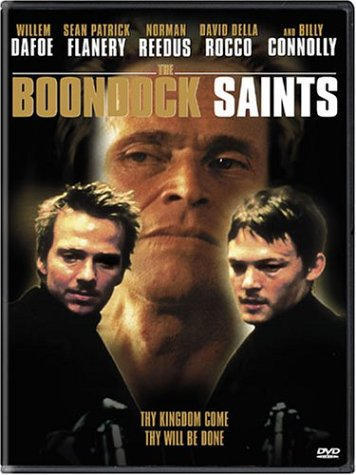 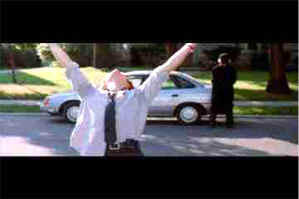 Last year's documentary, "Overnight," profiled the rise of Boondock director Troy Duffy, who attracted attention with this cult-hit DVD. In the face of the Columbine shootings, Twentieth Century Fox decided that a large-scale theater release would not be politically correct. The DVD has, nonetheless, become a relatively big hit. Its stylish story presentation and emphasis on action provide entertainment, but the movie is shallower then the kiddy pool.

Story: The story of the Boondock Saints is fairly simple. Connor and Murphy McManus (Sean Patrick Flanery and Norman Reedus, respectively) kill a mobster in self-defense and then receive- or do they? One of the weak points of the movie is Troy Duffy's blatant refusal to present the main characters with any sort of inner conflict- a message from God to rid the world of sinners (specifically, mob members are the first targets). Their actions are dictated mainly through flashbacks; the viewer sees the brothers go in and then the movie flashes forward to Paul Smecker (Willem Dafoe, who shines) and the Boston PD discovering the scene. As they uncover what happened, we see what actually unfolded on a parallel track, usually with Smecker describing what happened as we see it. A lot of the movie centers around scenes like this, with only the locale varying.

The story arc isn't particularly strong and neither are the movie's climax and denouement, at least in terms of plot. However, the story is woven in a scintillating enough way that an average movie viewer will not be deterred by. This "cool factor" carries much of the movie, so if you're looking for art, this is the wrong movie for you. It is merely a fun, often violent thrill ride through the eyes of two idealistic and likable anti-heroes. And yet, after watching the movie, the feeling sinks in that it could be a parable on religion or morality or something higher, but the full rant on this doesn't involve the story itself. To summarize, the story caters to stylized action fans.

Cast: The protagonists, played by Norman Reedus and Sean Patrick Flanery, are played up to par, but these two roles don't offer an outlet for emotional or thought-provoking moments. Their roles have been written as caricatures and thus, there is little for Flanery and Reedus to really do in terms of acting. As noted before, Willem Dafoe is marvelous in his role as a gay homophobe (yes, you read that right) who is also mentally frail but excels in his field of work. He is the only rounded character and Dafoe brings the character to life, much like in Mississippi Burning and The English Patient. David Della Rocca, who plays Rocco, was one of Troy Duffy's friends who had had relatively little acting experience before this movie and Duffy decided to cast him as a main character, for some reason. Much like Duffy, Rocca seems unable to grasp that anything in a movie should be left under the surface for the audience to discover. Fortunately, he plays such a cookie cutter role that it doesn't matter whether he acts or just yells (he does the latter). Billy Connoly is a superb actor, but he isn't introduced until there are twenty minutes left in the movie and he has remarkably few speaking lines so there is not much to comment on in his performance. The overall acting is certainly not a reason to rent or buy this film, but if you enjoy stellar individual performances, Willem Dafoe's effort should certainly be noted.

Direction: Finally, the chance to rip Troy Duffy to shreds. "Overnight" shows him to be a dim bulb and Boondock Saints doesn't argue differently (indirectly, of course). It's important to note that it's probably not the direction that is the biggest problem -- it's the writing. But the head writer was who? Troy Duffy, of course. The combination of him writing and directing stops the movie from having any deeper meaning. He ignores everything but the face of every problem. When watching for the second time, I got the distinct feeling that I could've done a much better job with the same budget and tools around me; that's probably not a good sign. Kudos goes to Duffy for the concept, but the project should've been handed off to someone else from there (something he has failed to realize for the sequel, which he and his brother are writing and directing). If you watch this film, you'll see what I mean about the direction. It's safe to say that the direction in Boondock Saints is the weak link.

Overall: Boondock Saints is more than simply the sum of these aforementioned parts. It is a fun action film, even if this review seems to focus more on some of the problems with the movie. In the same fashion as Tarantino's Reservoir Dogs, it presents its pervasive violence as a (perhaps mistaken) way to impose a sense of justice. It is not for the highly religious or young children, but for the action fan it's an hour and a half that doesn't require high brain activity, and sometimes we all need that.