Borderlands is one of the greatest 360 titles to date. It is very fun and highly addictive. There are endless amounts of customization and thousands of different weapons to collect. I love this game!! 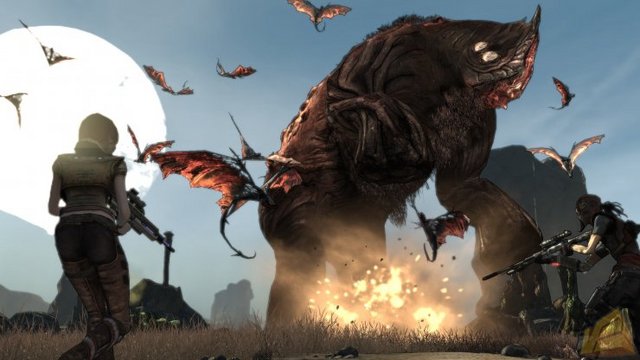 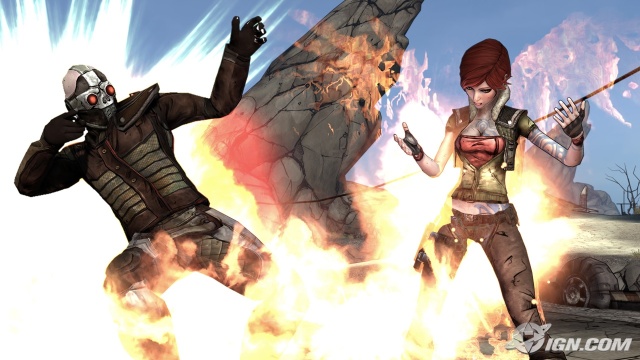 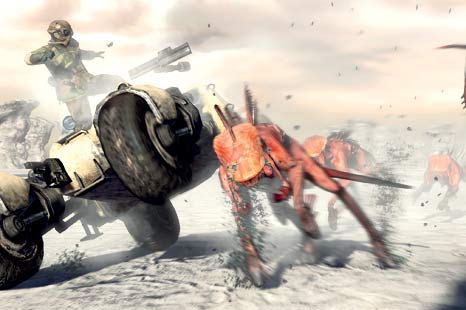 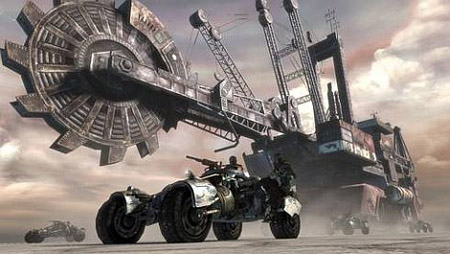 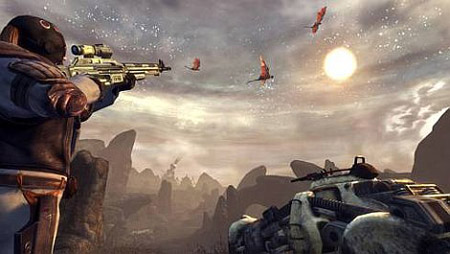 Borderlands is one of the greatest games I've ever played. You start out by selecting one of the four available characters: a Siren, who focuses on elemental powers and uses SMGs, a Bruiser, who uses his massive fists and strength along with shotguns, a Soldier, who uses expert combat skills and combat rifles, or a Hunter, who has expert sharp shooter abilities and a fierce pet called Bloodwing. Each character can also use any weapons found throughout the game, but they're skilled in the weapon they start with. After you exit the bus on Pandora and meet the local Claptrap, a helpful robot who you'll see many times through the game, you begin your adventure.

You will face many villains and monstrous animals throughout the story. Along the way you will also meet many strange people on Pandora. Most of them will have jobs or tasks for you to complete in order to progress through their areas. Some jobs are rewarded with weapons and others with money. On Pandora you will see a lot of wastelands and desolate places filled with creatures trying to kill you. As you fight for your survival and complete jobs you will earn experience points and level up when enough are gained. As you level up your character will earn points you can add to different perks each character has. The Soldier has ammo or health regeneration and a turret gun. The Bruiser can add points to his rage abilities or his shotgun skills. The Hunter can increase his pet Bloodwing's attack or add to his sharp shooter sniper and pistol skills. The Siren becomes surrounded by flames as you add to her elemental abilities, or becomes deadly with her SMG. There's also vehicular combat.

While traveling to the twenty plus areas of Pandora you will find thousands of different weapons, each with its own powers or flaws. Once you've leveled up enough you will start to find weapons with elemental powers fused to the bullets it fires. Some will light your enemies on fire, others will shock them, some will eat away their flesh and armor with corrosive acid, and others will explode on contact. There are literally thousands of them to find and collect throughout the story. This game also allows you to play though it up to three times, and each time is harder than the previous one. Offline two player Co-op is very addicting, and you both get to customize your own characters and collect your own weapons. Online you can play up to four players Co-op which is also fun.

The main focus point of the story is to find the 4 keys to the Vault and open it. You will travel across over twenty different areas of Pandora to find the keys. There are several people on Pandora that either want to help you open the Vault or keep you from it. As you progress through missions you learn who is on your side and who wants you dead. Selling weapons at the vending machines and buying upgrades is crucial to your survival. Equip the proper grenades and shield to ensure your safety too. To beat every mission is almost a must to reach level 50. The stronger you become the easier the enemies die. You can also level up each kind of gun the more you use them.

There are over a hundred different missions to complete. All are ranked in your character's sub-screen with the importance and difficulty of each. The more difficult ones have better rewards including more experience points. There are several missions for each area of Pandora, and each is full of henchmen and creatures to kill. When you finally reach the center of Pandora and see the Vault you will find yourself facing the ultimate challenge... to survive.

I liked the story a lot and thought it was very entertaining to play through twice already. I am sure I will soon begin my third playthrough. The graphics have a cartoony art style to them, which makes it a one of a kind game. The voice overs and controls are also near perfect. One of the best features of the game is the Co-op story mode, where you team up with a friend and complete missions together I think this game will easily stand the test of time and be a fan favorite for years to come. I love the unique graphics and customizable characters. The thousand different guns is a nice touch too.

They have also released three downloadable add-ons to increase the story's depth. You can download Ned's Zombie Island, Mad Moxxi's Underdome, and the Secret Armory. Each one adds to the already great storyline. They also add many missions, vehicles, guns and level ups to the game. I guarantee if you buy or trade for this game you will love it. Buy it!!!
Review Page Hits: 5 today (232 total)
mediahook