Discover new technologies, weapons and a better gaming experience as you search for and fight terrorists in war torn cities in 18 action packed levels. 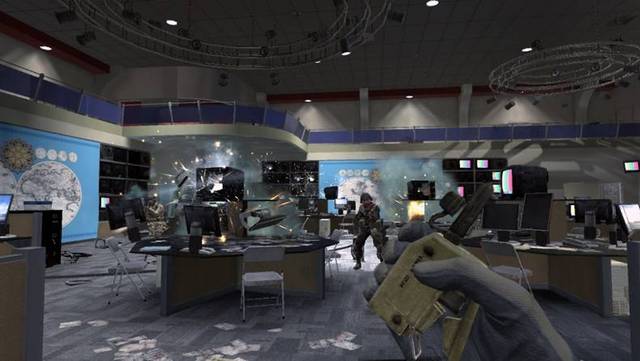 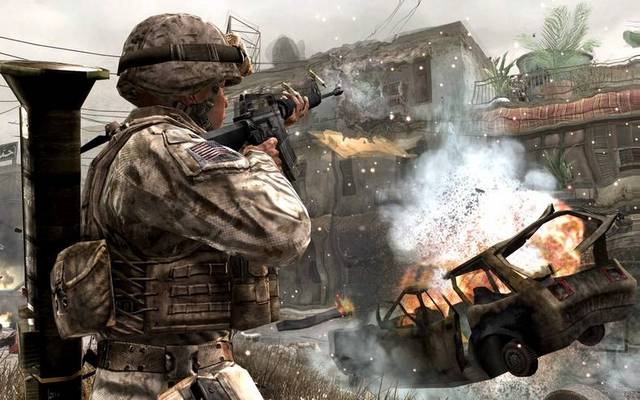 Call of Duty 4 Modern Warfare is simply one of, if not the best, FPS games ever made. From the very first mission on the cargo ship to the epilogue, the game grabs your attention and never lets go.

The game is very realistic, as you will be able to tell the moment you begin your training. The environments, which will take you to villages, forests, ships and even war-torn ghost towns are very well created. Each house, warehouse and farm have the most detail ever seen in video games. With this type of powerful graphics the explosions by grenades, RPG's and gunfire make the battle come to life as you fight for your life. The controls are very easy to get used to and very simple to understand. Unlike many other shooter games you won't forget which button is to shoot, toss a grenade or switch weapons, the button layout does a remarkable job of keeping your attention on the mission objective. The voice acting is also pretty good, but there are a few slight instances where it totally sounds like the guy is reading from a card. Thankfully, those moments are few and far in between. The music goes with the setting very well, it is fast paced when the action starts and doesn't distract you during the quiet sequences and whether the music is playing fast or slow it never becomes dull.

As far as the actual gameply goes you pretty much start the fast paced action the moment you begin your first mission on the cargo ship. From here on, there is never a dull moment because you will never encounter the same situation in each of the missions. You will spend some time on a ship, in an airplane, searching homes, searching abandoned buildings and villages or even in the back of a truck firing at the enemies. Each of the 18 missions offers something new and exciting to deal with and rarely will you have to backtrack. The only time I remember having to backtrack was so that I could evacuate the farm house but even then it was exciting trying to fight more waves of terrorists as I made my way to the extraction point.

The greatest benefit to this game is that it finally takes the player to a new setting in the current era with new technologies and new weapons; it's a totally different feel from the overload of WWII shooter games on the market. This game is very addicting and very fun to play and even though it's a very short game the replay value is great, even after you've beaten the game you'll want to go back for more. Unlike most games, this game will actually have you remembering your favorite parts well after you've completed your gameplay. Hours after you turn the game off you'll be thinking about the explosions or strategizing your next move on a future playthrough. When a game can do that you know it's doing everything right.

The intel that you can collect during the game doesn't really add incentive to collecting them because once you collect all 30 pieces all you get is an option to use cheats on your next playthrough. The cheats may be fun at first but because the game is so great the way it is, the cheats may take a little of the excitement away. It is mainly used for laughs, for example, by making everyone turn into tires when you shoot them or making everything play like an old Charlie Chaplin movie. It's fun for a little while but the thrills soon fade away. If you do choose to collect them, however, they are very easy to find, just look into every room when you enter a building and more than likely you'll find all 30 pieces in no time. There is no way to track if you've missed any on a level so a good memory or a guide may still help if you want to get them all with as little trouble as possible.

The AI in the game is very smart also, as the enemies will routinely duck while reloading and toss grenades with human-like accuracy. At the same time your AI allies are fully capable of progressing through the levels on their own, this will come in very handy if you're close to dying. Dodging into cover while you recover and having your allies kill the enemies is a great benefit, no longer do you feel like you have to carry the entire team on your back. This is great because just like being on the battlefield in real life you must fight as a team to accomplish the mission at hand.

The online multiplayer is probably the best aspect of this game; it features both team based and deathmatch based modes. Altogether there are around sixteen or so maps for the game and about a dozen different variations of games you can play alongside 18 other players. One great aspect of the multiplayer experience is the respawn system. Instead or respawning far away and having to search for the action after you die, you will respawn near another teammate, in which you are then acting as a reinforcement in the battle. This new system isn't 100% accurate but it works better than most other games as far as getting the player back into the action right away. The ranking system does a great job of advancing your character to higher levels as well, all those hard earned hours of knife kills will pay off as you reach towards the level 55 commander. The better you do in a match with kills and objectives the more experience points you will earn, and in return the more weapons, game modes, perks and challenges will unlock for you. With these incentives at hand the game does a great job of bringing you back to the online experience. The online experience also handles really smooth and fast so you won't have to worry too much about getting kicked out or lag times and stuff, the matches usually start right away. All in all this is probably the best game to play online because of the intense battles, graphics and incentives.

The only thing I didn't like about this game was the dog attacks. They are very annoying to deal with and once one grabs you by the throat you have to have perfect reflexes in order to kill it or else you'll die. For every 10 times a dog caught me I was able to kill it 2 times, so needless to say I ended up doing a lot of checkpoints over again. Playing the game on veteran mode is also easier than expected. Some of the missions at the end of the game are pretty difficult on veteran mode but if you're looking for a strong challenge then learn the routes, have some patience and you'll be able to complete the game on veteran mode.

Overall, this is one of the best games ever created. The replay value, graphics, level design, voice acting, gameplay, and weapons give this game an experience everybody must try. I highly recommend playing this game at all costs, whether it be single player or online multiplayer. It isn't my favorite game but it is one of the best experiences I ever had in a video game.
Review Page Hits: 0 today (292 total)
mediahook