The Chronicles of Riddick: Assault on Dark Athena Assets Page

The Chronicles of Riddick: Assault on Dark Athena (PlayStation 3)

The 2004 classic is back with updated graphics, a new episode, and online multiplayer 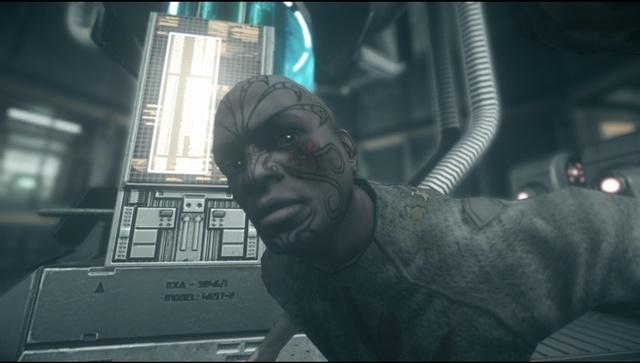 I never owned an original Xbox, but The Chronicles of Riddick: Escape From Butcher Bay had long been on my gaming radar. Every review or recommendation I heard about the game proclaimed it to be exactly what every movie-based video game should strive to be. Instead of playing the last-gen version on my Xbox 360, I instead decided to wait for the new and improved cross-platform release of The Chronicles of Riddick: Assault on Dark Athena. This packaging is designed for newcomers and veterans alike. Included in this new offering is a graphically polished version of the 2004 classic, and all new single player campaign entitled Assault on Dark Athena, and online multiplayer.

Being a complete noob to the Riddick experience, I predictably started with the Butcher Bay single player campaign. The story is a prequel to the events depicted in the films The Chronicles of Riddick and Pitch Black and focus on the attempt of Richard B. Riddick to escape from a sophisticated space prison known as Butcher Bay. The game does a fantastic job of blending several different types of play styles - incorporating stealth action, hand-to-hand combat, and gun play into one very well rounded package. This chapter of the saga was indeed very well developed and absolutely deserved the praise that had been heaped upon it. I have no frame of reference between old and new graphics, but the visual presentation looks good and on par with any other of today's action game releases. The voice acting is very polished as well, with voice talent delivering very believable dialogue that helps to flesh out the story and environment. My only gripe here would be about the roboticness of Vin Diesel, but that's a trait of every spoken Vin line - video game or otherwise.

The follow up and all new chapter, Assault on Dark Athena, contains most of the same elements from its predecessor, but sadly doesn't seem to do them nearly as well. The blending of styles found in Butcher Bay is still present, but most of these segments are too brief and pieced together to give the same perfect blend feel of the original. Just as you start to get ingrained in a sneaking mission the gameplay shifts to another medium. This new chapter also includes too many platforming sections - a game mechanic that doesn't function particularly well within this type of title. When in control of a character like Riddick, I know that one of the last things I want to do is scale and jump between stacks of crates.

The other new feature in the package - online multiplayer - feels more like a "me too!" effort than its own fleshed out and worthwhile inclusion in the total game experience. Players can play in standard deathmatch, team deathmatch, and capture the flag modes with the inclusion of a Pitch Black mode as well. This game type has one player in the shoes of shadow lurking Riddick while the other players work in an effort to capture and kill the lurker. This mode can be fun when all players are of a similar skill level, but the novelty quickly wears off if some players are noticeably better or worse than others. With friends locally this game mode is quite fun, but can quickly become too easy or too hard depending on the skills of the other players involved.

Instead of multiplayer, I would have rather seen the developers put more effort and content into the Assault on Dark Athena campaign. When side by side with the Butcher Bay content it is easily apparent that it is not on the same level as its predecessor. I'm not sure if this is because the team was intent on including new single player and multiplayer experiences, but the overall package would have been better suited to focus on one or the other and expend all of its efforts into creating something worthy of sitting alongside the much praised original chapter. New players to the franchise will still have a worthwhile experience with this title, if even just for a retooled Butcher Bay, but players who have already played through the original probably won't find anything extremely remarkable here except for a lackluster second chapter, improved graphics, and a forgettable multiplayer experience.
Review Page Hits: 0 today (165 total)
mediahook