Surprisingly fun if you give it a chance. 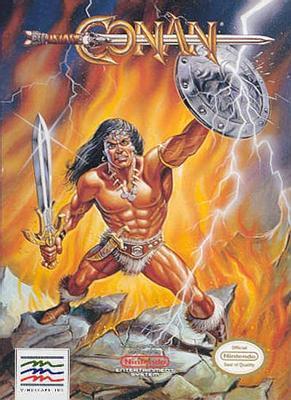 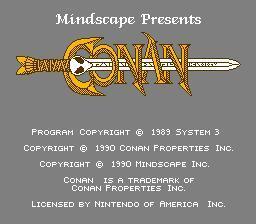 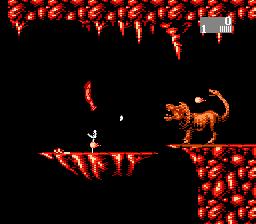 Now, when people hear the word "Conan" in reference to an NES game, they have a tendancy to go on one of their "this game sucks" rants, for a few reasons: horrible controls, obscenely hard gameplay, horrible graphics, etc. I disagree with everything most sane gamers have to say about Conan, although I'm hardly a sane gamer. I admit, for a while I used to bash Conan too, but then I did something strange - I actually played the game!

The biggest complaint about our barbarian friend is that the game is insanely difficult. I must say, there are tough places, but the game itself isn't that hard if you know what you're doing. Conan rewards exploration, not to mention thoroughness. For example, people say the first boss is impossible, yet he's easy if you know the pattern. You can't just plow ahead, you have to take your time and get everything you possibly can. However, the game can be tough, as you only get three lives to start the game, and there is no way to gain more and no continues. If you die on the last level, that's it, you're done... Death is always just around the corner in Conan, usually when some green floaty dude appears in front of you mid-jump and knocks you into the cavernous depths you were trying to avoid.

Visually, Conan is stunning. The sprites are very detailed, and the bosses are just gorgeous! The backgrounds fit the level. People rag on the game for having plain black backgrounds. Well, the first level (which few people bother to finish) is set in a cave... What do you expect? Once you reach the second level, you can see what this little hunk of plastic can do. I wish I could say the same for the music though. Don't get me wrong, it's well done and all, but there are only three tracks, and they tend to get fairly repetitive after a while. And don't even get me started on the bland, grating sound effects. If you didn't actually need to hear if you're hitting your target in some places, I'd recommend just turning it off.

Ah, the controls. I've heard people say Conan has terrible controls. I disagree - Conan has a terrible control scheme, however, the controller responds well to it. For example, to pick up an item, you have to duck and grab it. Normally, you'd just hit down, but in Conan, the down button is assigned to be a forward jump. In order to duck, you have to hold down either A or B and THEN hit down. Not exactly a natural flow, but once you get the hang of it, it's really not that bad. The controls are responsive almost to a fault...indeed, the slightest tap could send you toppling into a chasm, or straight into the jaws of a hydra.

Conan is known throughout the gaming community as a horrible game...and if you've only played the game for about five minutes, then yes, this is true. But give it a chance, learn your way around the game, and find out for yourself what you've been missing all these years.
Review Page Hits: 1 today (576 total)
mediahook