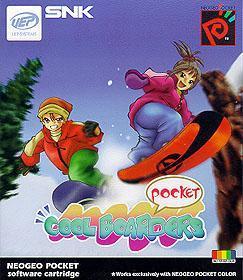 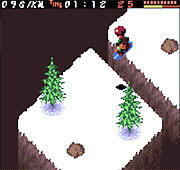 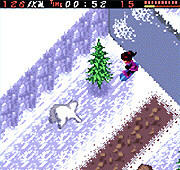 
Gameplay
The camera view is not behind the player but at an isometric view from above. The object is to get to the bottom of the hill without falling off the hill, hitting trees, or running into wildlife. As you go the game keeps track of how fast you are going, how long it is taking you, and your life is represented by a life bar. If your life bar hits becomes empty, you lose. It would've been nice for the developer, ESP, to include some tricks to do with your board but there aren't any.

You have two characters to choose from one male, one female. You also only have two game modes to choose from: Free-ride, which is where you can choose any of the 20 stages to play on, and Survival, which is where you see how many stages you can get through on one life. Even though 20 sounds like a lot, the stages are so similar you can barely tell the difference between them.


Graphics & Sound
The graphics are bland. The only color is in the green of the trees and your character. It's nice to see your characters jacket flowing in the wind as you go but there isn't much character animation outside of that. I don't know what they were going for in the sound but it's very repetitive and quite annoying after a while.


Control
You control your character by using the analog stick but it actually feels like you're controlling a stick. It's difficult to move and you will constantly find yourself smacking into things. Jumping takes a great concentration of timing, which is controlled by the B button. Get used to falling off the mountain because it's tough to time your jump to how the developers wanted. This makes the game challenging but in an artificial way.


Replay Value
None, if any. All you do is go down the same mountains. There's nothing to unlock at all, no new characters, no new terrain/maps, no new abilities, nothing.

I'd only recommend this game to collectors because there isn't much fun here and for the price it's a hard sell to make to almost anyone that isn't collecting; even to sports and snowboarding fans.
Review Page Hits: 0 today (1,168 total)
mediahook