Crackdown is as fun and addicting as the GTA games that came before it. 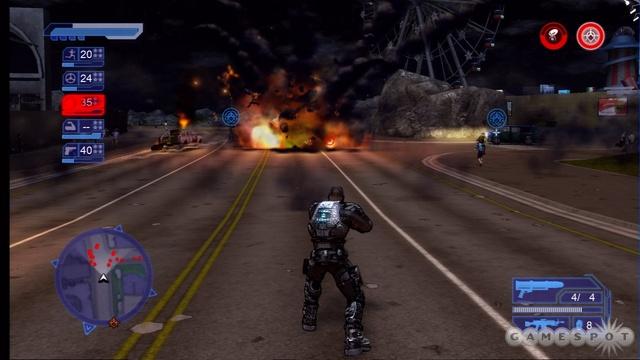 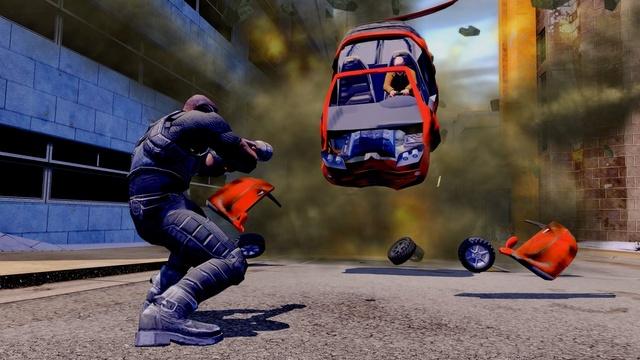 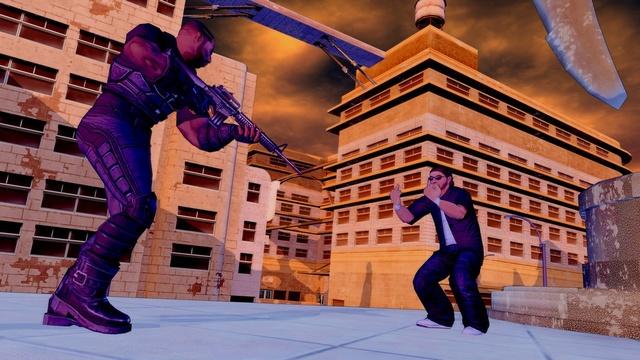 Forget about the Grand Theft Auto series for a minute. Developer Realtime Worlds may have been influenced by that series heavily, but they set out to create their own brand of free-roaming action. Crackdown is as ever brilliant and influential as Grand Theft Auto was when it was first released. The sheer amount of customization, abilities, and freedom will have you hooked for a very long time.

The developers at Crackdown hate when their game is being compared to GTA, and rightfully so. It is far from anything players have done in the series thus far. What makes Crackdown such an interesting and fresh change from the genre is that players will take on the role of a genetically altered law enforcement agent, breaking away from the norm of Mafioso and crime infested scenarios. That isn't to say the game is free of violence, as there is still plenty of mayhem to undertake and lots of angry people who need to learn their lessons.

Crackdown is set up into four islands, one for your agency's base with the remaining three left for the individual gangs. Every island is open for exploration from the start, but some islands may need more improved attributes in order to successfully commence attacking. Your goal for the game is to seek out and kill all 21-crime lords scattered throughout Pacific City. A grueling task indeed, and it is by no means an easy feat to accomplish. Some bosses are atop massive skyscrapers, deep within caves, or surrounded by dozens of gun-toting henchmen. The order in which you dispose of them, or the matter in which you do is entirely up to you, leaving you with the ability to choose your own path.

As a genetically altered agent, you already have minor superpower abilities, such as super strength, fast speed, and increased reflexes. At the start of the game your skills will be more powerful than anyone in the town, but they can be improved to nearly four times the normal which makes you one of the most dominant forces in the entire city. While the ability to overpower your enemies from the start might seem like an unfair advantage, enemies will still provide plenty of hard-to-get scenarios. They are relentless and unforgiving, constantly hitting you as you are knocked down and double-teaming you in firefights. Your only option is to improve your overall skills in order to become better accustomed to the goals at hand, which is to rid Pacific City of crime once and for all. There is also several supply points, which when captured offer you a quick means of transport and ammunition, located around the city. There are numerous supply points on every island so it is detrimental to try and capture each one, since some missions may have you venturing off far away from the main city, and ammunition is the most important thing you need.

Your character has a total of five abilities that can be enhanced throughout the course of the game; Ammunition for better precision targeting, explosives for a bigger blast radius, agility for improved speed and jumping, driving for enhanced steering and car control, and firepower for an advantage in firefights. Each of these five skills can be improved five times each in the game, some of which may take longer to max out than others. In order to get experience points to improve your skills, you must eliminate the enemies in any way you seem fit. Shooting enemies with your gun improves firepower, running them over with a car improves driving, and so on. While killing enemies can improve all of the skills for the most part, collecting agility orbs scattered around the entire city can mostly only enhance agility. These green orbs help you in your overall endurance, as well as how high you can jump (a total of over 50 feet at max), and even at how fast you can run.

That is the beauty of Crackdown. There literally is no mission structure or storyline so you can basically do anything you want at any given time. If you feel bored of taking down crime lord after crime lord than you can simply go on an orb finding spree, or hop in a car and tear up the roads and do special stunts from the top of buildings. The amount of freedom in Crackdown is astonishing, and there will never be a moment in the game where you will be bored or confused of what to do next as there is always something to please even the most anxious of gamers.

What makes exploration so much fun is how visually stunning the game looks. Crackdown went for an unusual gritty-noir style, which helps represent the feeling the game is trying to exhibit. The styling is fitting for the cops-and-robbers style of gameplay, and everything is beautifully designed and illustrated. Character models for the agency cops are some of the best seen, with facial models, clothing, and body structure all evolving as the agent evolves over time. By the end of the game, some agents look like robots with huge sets of armor. No two buildings look alike either, so you will never get bored when you venture into a building searching for an enemy, or hopping atop rooftops to your next destination. Even vehicles and weapons all look impressive, and like the character models, they advance over time along with the agent. Unfortunately though, some enemies look alike and many of the interior structures of the buildings look all too familiar with simple staircase to show the paths to take.

Simpleness aside, Crackdown will get you lost on numerous occasions. Bosses aren't depicted on screen until you are in relative distance to them. Realtime Worlds probably did this intentionally so players make full use of the city and don't spend most of their time inclined to certain parts of the islands or supply points. Needless to say, it does feel kind of mean to have us running around constantly just so we can find the new boss to take down. Hours upon hours of free roaming will no doubt cause irritation before you finally see your intended target. But the ensuing boss battles will have you forgetting about the mindless wandering.

Unlike past GTA games, Crackdown makes use of an excellent new co-op feature, which lets two players tackle the entire single player campaign together. You can even take out separate bosses on separate islands at the same time, and if you ever want to know the location of your partner you can simply look at the HUB to see his exact location. He is even displayed on screen as a little marker pointing at his general direction. While Realtime Worlds states that the co-op has an instant drop-in feature that is highly the case. Players must coordinate beforehand and start the games from the main menu. It gets annoying sometimes to have to exit your current game, start a new one, wait for your friend to join, and restart whatever it is you were just doing. While the co-op is definitely a nice change to the genre and something that makes Crackdown stand out, it could have been handled a lot better.

Overall, Crackdown is as fun and addicting as the GTA games that came before it. With the ability to enhance your character's growth and skills, as well as have the chance to enjoy co-op with a friend, Crackdown is a true masterpiece in a genre that has long been dominated by those folks at Rockstar. Once you start soaring over rooftops you will not want to put the controller down, as Crackdown will have you hooked for a very long time. Plus it has free entry into the Halo 3 beta, which is a nice aftertouch.
Review Page Hits: 3 today (657 total)
mediahook