Imitation is the sincerest form of kart-tery 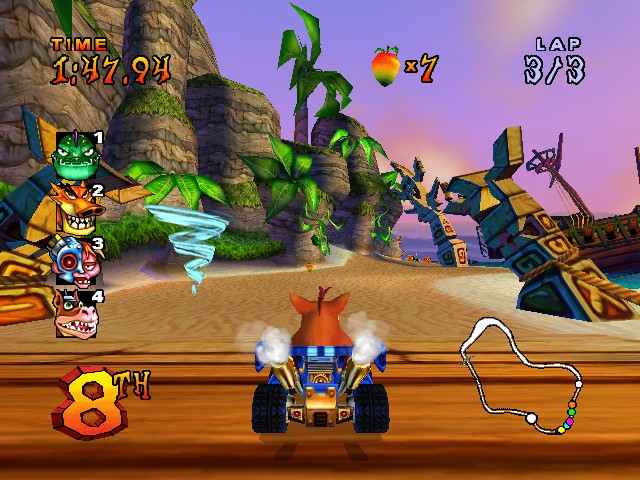 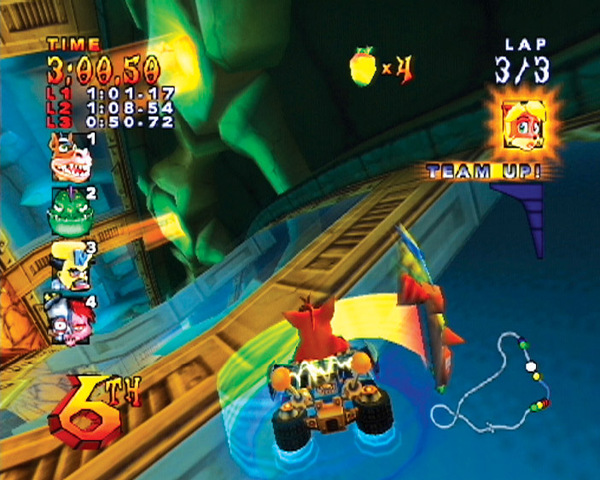 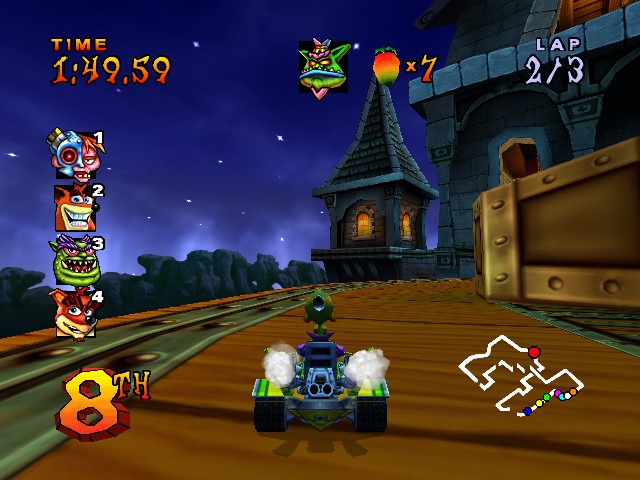 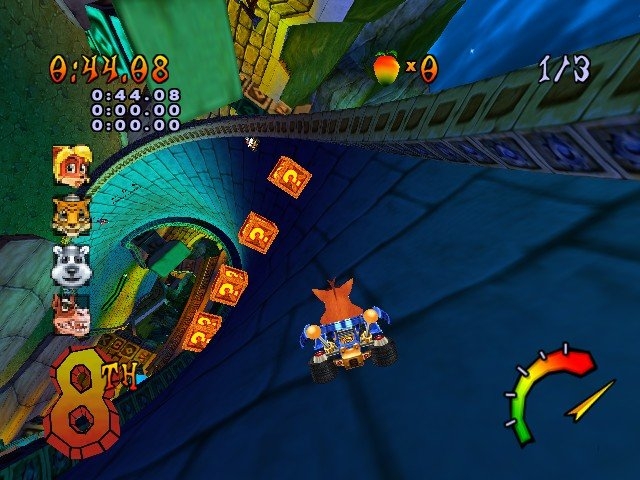 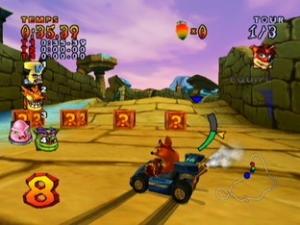 Back on the original PlayStation, Naughty Dog (the studio behind Jak and Daxter, Uncharted, and The Last of Us) developed a kart racer to battle against the Nintendo 64's arcade kart racing titans, Mario Kart 64 and Diddy Kong Racing. The game was known as Crash Team Racing, starring characters both old and new from the Crash Bandicoot franchise that Naughty Dog previously worked on. Crash Team Racing followed the foundations of both games it was inspired by, most notably Diddy Kong Racing's awesome Adventure Mode.

After Crash Team Racing and Crash Bash, a Mario Party-esque game, were released, Sony lost the rights to Crash Bandicoot to Universal Interactive. Several Crash Bandicoot games were launched the next console generation with Universal Interactive, then Activision, as the publisher, including a game very much resembling Crash Team Racing. Its name is Crash Nitro Kart, and it pretty much uses the Crash Team Racing formula without Naughty Dog as the publisher. Not just a carbon copy of its inspiration, Crash Nitro Kart happens to be a solid kart racing experience on sixth generation platforms.

The story of Crash Nitro Kart has Crash Bandicoot and his friends, as well as Dr. Cortex and his henchmen, taken from Earth and forced to race for Emperor Velo and his coliseum audience's amusement, or else Earth will be destroyed. However, if either team, Team Crash or Team Cortex, can earn their chance to race Velo and beat him, the Emperor will send them back home. The story is set up through a nice collection of full motion video cutscenes. The only issue with these is that there is no subtitle option to choose from, making for hard times for deaf players, as none of the spoken dialogue is given text whatsoever.

Crash Nitro Kart contains a host of modes for single player and multiplayer play. The main single player mode is the Adventure Mode, which if you're familiar with how it worked in Crash Team Racing, then you'll be right at home. If not, allow me to explain what Adventure Mode is all about. You start in one hub that houses three circuits. Upon getting first in each of the three circuits' races, you can challenge the champion, or boss, of that hub. Beating the boss unlocks two types of challenges in the previous three circuits: the CNK Challenge and the Relic Race.

The CNK Challenge is just like the CTR Challenge of Crash Team Racing. Not only must you collect three letters: C, N, and K, around a given track, but you have to come in first place as well. The Relic Race requires you to beat a target time akin to a time trial. Fortunately, in a Relic Race, there are different crates strewn all along the track, each with a number from 1-3 on them. Ramming into a crate stops the timer for that amount of seconds. Both the CNK Challenge and the Relic Race are joined by a lone arena type of event in each of the game's four hubs that gives you an arena to speed around, collecting 20 crystals before time runs out. All of these types of events are enjoyable, varied, and add longevity to Crash Nitro Kart's Adventure Mode. Throw in the ability to run through Adventure Mode as both teams with different cutscenes shown, and you have a single player mode that you can keep coming back to.

Aside from Adventure Mode, there are traditional time trial modes to choose from. You can either select from a typical three-lap race or try for the best lap in a given track. There is also a Quick Race mode that allows you to choose from the selection of Crash Nitro Kart's tracks, select an AI difficulty, and how many laps the race will be. Confusingly, this mode is only for single players, making it so if you want to play multiplayer and race, you're stuck choosing from one of four cups of three races each. You don't get to choose which race you'd like to play together, something that most every kart racer has that Crash Nitro Kart doesn't.

Multiplayer is also offered in the Battle Mode, which brings five game types for players to let out their aggression on their friends or fellow family members. There is your typical point-based mode, a last kart standing mode, a crystal-collecting mode, a capture the flag mode, and a beacon-grabbing mode. Most modes can be played free-for-all style or team-based, save for the flag and beacon modes that are only available for teams. Battle Mode is an engaging experience, but if you're looking for something that gives you the same adrenaline highs of say, Mario Kart 64's Battle Mode, then you will be sorely disappointed.

Crash Nitro Kart feels a lot like Crash Team Racing in more than just what it offers mode-wise. Developer Vicarious Visions certainly did its homework on how Crash Team Racing plays as well. Crash Nitro Kart features tight and responsive handling, and depending on which of the sixteen characters you choose from (some need to be unlocked), their speed, acceleration, and turning abilities will be different.

The same power-boosting mechanic of Crash Team Racing is present in Crash Nitro Kart. When you hop into the air and start drifting by pressing and holding one of the shoulder buttons, a gauge appears. The gauge will grow from green to red. When it's in the red portion, you press the opposite shoulder button to let loose a boost. You can do this up to three times on one drift, and you are also able to chain trios of boosts for some excellent power-boosting opportunities. At first, you might just successfully chain three boosts together, but as you play on, you might become skilled enough to do upwards of 20 or more consecutive boosts on a given race.

Wumpa Fruit are like Super Mario Kart's coins in Crash Nitro Kart. Collecting ten not only boosts your character's top speed, but it also allows items you collect to enter juiced mode. Ordinarily, items have a normal effect, whether it's a homing missile, a TNT crate that traps an opponent in it before it explodes (though by hopping like mad, that opponent can escape), or a bowling ball bomb. When an item is collected in juiced mode, that item becomes an upgraded version, so the TNT crate would become a NITRO crate that explodes immediately when an unassuming racer crashes into it.

So, the modes are fun, the racing is tight, and everything appears to be just like Crash Team Racing, except it's Crash Nitro Kart. Everything's great, right? Well, Crash Nitro Kart is inferior in one aspect, and that is in the track selection. Crash Team Racing had over sixteen different races to choose from. In comparison, Crash Nitro Kart only has 13 total. This is a relatively small amount compared to other kart racers on the market, and it's a shame. Why? Because the tracks are really well designed, offering a wealth of secret shortcuts and pieces of track that are only accessible with some great skill involved.

A good portion of the tracks are the precursor to 2014's Mario Kart 8. They feature anti-gravity sections that have you racing upside-down, at right angles to the ground, and much more crazy ways to laugh off gravity. Sure, they're clunkier in execution and nowhere near as polished, but it shows that Vicarious Visions wasn't resting on its laurels when it came up with the tracks of Crash Nitro Kart.

Imitation is indeed the sincerest form of flattery, and no doubt Crash Nitro Kart owes a lot to Naughty Dog's original kart racer starring Crash Bandicoot and friends. While Crash Nitro Kart isn't truly as innovative, as polished, or as well executed as Crash Team Racing, Vicarious Visions' racer is certainly worth tracking a used copy down for. Compared to its contemporaries and even kart racers released around its own period of time, Crash Nitro Kart doesn't make those games eat its dust, but it does deliver tight racing action, clever track design, and plenty of charm.
Review Page Hits: 0 today (1,064 total)
mediahook