This is a shallow port of the arcade game and a mediocre racing title. 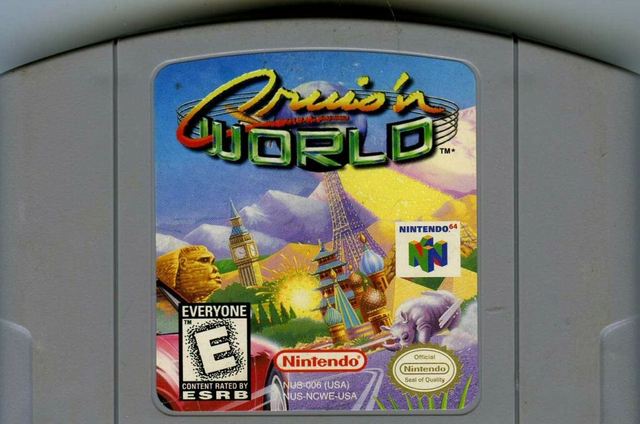 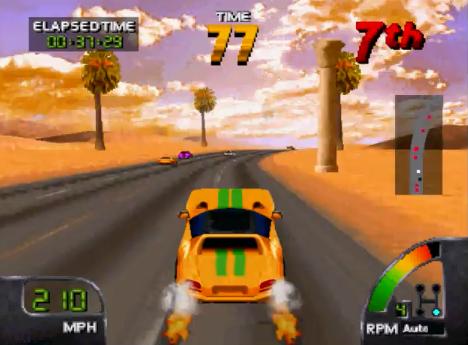 Cruis'n World for N64 is attempting to be a port of the arcade game. The arcade game succeeds (despite aged graphics even at the time of release) by being bright and colorful, having an inviting atmosphere, and providing a snappy frame rate. The arcade games in the franchise were never technically impressive, but they were fun racers. This N64 port fails miserably on every aspect that made the arcade game work. Below are those aspects in no particular order:

Controls - The N64 controller has that great analog stick that was seemingly designed for First-Person Shooters. But in this case the controller doesn't necessarily translate this well to the driving experience. Keeping controller difficulties in mind, the controls in this game are honestly awful.

Like other N64 games, the controls have the exponential increase as you approach the end of the range in either direction. While you do compensate for this in time, it makes transitions around curves on the track "interesting" to say the least. This is usually handled in other games like Mario Kart by having the game require more of a turn to smooth out this curve (in other words the exponential curve of the controller is made more linear by the inverse resistance in the car's steering). Cruis'n doesn't seem to do this. Your use of the stick translates exactly to your car's movement. And that means that you will have to be very restrained in your thumb movements to avoid crashing. This made my driving experience tense instead of relaxing.

Just to be sure it was the game, I tried the game with a N64 steering wheel. It was worse. Because there's no sense of smoothness, a slight turn of the wheel would drive me into the wall. I eventually got used to the wheel, but decided the controller was better for this game. I also tried with vibration just to be thorough - which worked but wasn't really tuned to what the game was doing. I suppose this isn't all the game's fault, as vibration was dramatically improved over the PS2's lifespan and into the 360 era. The vibration came at the beginning of the race when revving up and upon collision.

Physics - The terrible control scheme isn't helped at all by the bad physics in the game. There is almost no real concept of momentum. It's likely this calculation was left out to save processing power and replaced with a horrible short-cut version of these calculations. In the end it makes you feel like you're driving cardboard cutouts of cars instead of cars with any weight. There's also no sense of interaction with the environment. If you hit a traffic sign, your car will immediately stop (and possibly flip in the air uncontrollably like it's having a seizure). Cars that are hit by other cars will bolt out in front you with an incredibly unrealistic speed-up, and as soon as you hit any part of them you will immediately stop. This is incredibly annoying when you dodge a car pile up only to be caught up in it right after having passed the crash site. Sometimes, if you're driving very fast, you will run into a car, flip very quickly, and then keep going at your original speed.

You're also forced to basically drive on the track, directly between the lines. Going off the track at all, you will meet an invisible force wall. This becomes annoying when you want to power-slide or just cut a corner. Even Mario Kart for SNES let you do this.

And to add insult to injury, the game has lots of needless jumps - ridiculously sharp jumps that prove to you over and over again what a ridiculous racer this is.

Frame Rate - The least you can ask of a bad game that isn't realistic and doesn't control well is to have a snappy frame rate. For the most part, Cruis'n provides this, but at the beginning of every race prepare for severe slowdown. I thought at first that this was because you were gearing up and increasing your speed, but if you come to a stop anywhere else in the race, you will see this is not the case. The problem is that the game simply can't keep up with the number of cars on the screen. Once you get going, half the cars will be behind you and this problem will go away.

Graphics - I don't expect a lot in the graphics department from the N64 because of the age, but this game simply looks terrible. And given the very simplistic graphics design that's really inexcusable - I mean there are no reflections in the game for the most part and no real lighting sources like in other 3D games. The cars are also very cartoon-looking with little attention given to detail. Given the extra processing power, why does the game still look worse than a SNES racing title?

Also, the "world" scenery is a bunch of pre-rendered textures (seemingly slapped up on a solid wall right outside of edge detection instead of being draped across different shapes). These textures are very low resolution - we're talking looking at times like Wolfenstein 3D for SNES. Sometimes it's like playing an Atari in that you have to use your imagination and squint to imagine being in the race's country at all. This game isn't very far off from 3D SNES titles like Stunt Race FX graphics-wise.

Sound - The sound isn't terrible, but it's not memorable either (I couldn't for the life of me even remember the music other than the catchy title song, so I had to go listen to it for the review). Music and effects in this game are every bit as cheesy as the arcade, but the arcade pulled it off - maybe with better quality or flashing lights to accompany it or something. At least the human sounds are coming from a digital recording and aren't synthesized.

And expect to be met along the road with random elephant noises for no apparent reason in the jungle countries (given the graphics, perhaps it's a blessing we don't see the elephant). I was also surprised and somewhat amused by the sound of a woman screaming in terror every time you wreck the car (and given the shoddy controls, she'll keep screaming a lot). And it's the same sound no matter what you hit or what you are driving.

Summary - If you're a collector and can find this game for a couple of dollars you might give it a shot (it's bad, but it's playable). The game is a poor execution in almost every area and doesn't provide any acceptable long-term driving experience. I honestly have difficulty understanding how this game got past quality checks. Perhaps there was such a rush to port the arcade title that developing a good player experience was lost in the process. And this game has no real charm to stand the test of time. I'm not sure if the other titles in the series are better, but I can't imaging them being worse.
Review Page Hits: 0 today (748 total)
mediahook