Imagine a group of elite soldiers with a 'Septillion' dollar Nano suit each, then saying "Instruction manual? Who needs an F--ing Instruction manual". Great game, but to experince it fully you need the mod or Vista+Dx10, and a very high spec machine! 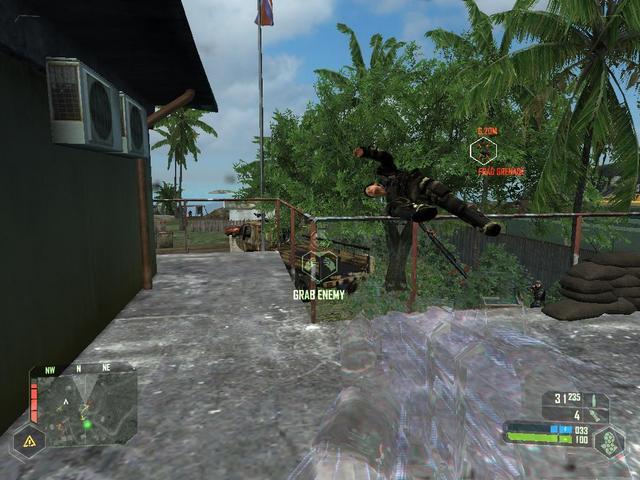 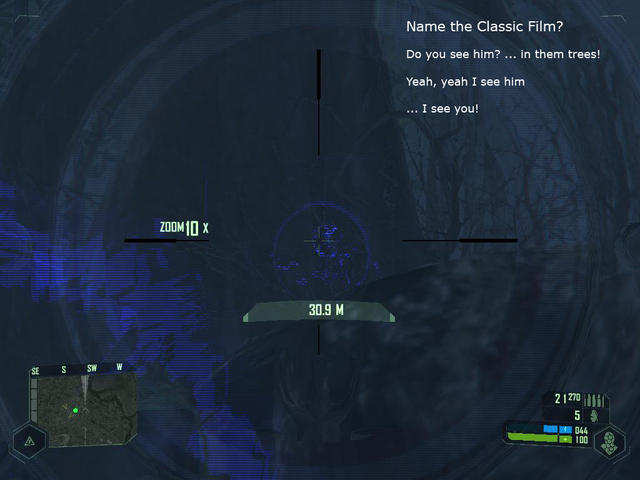 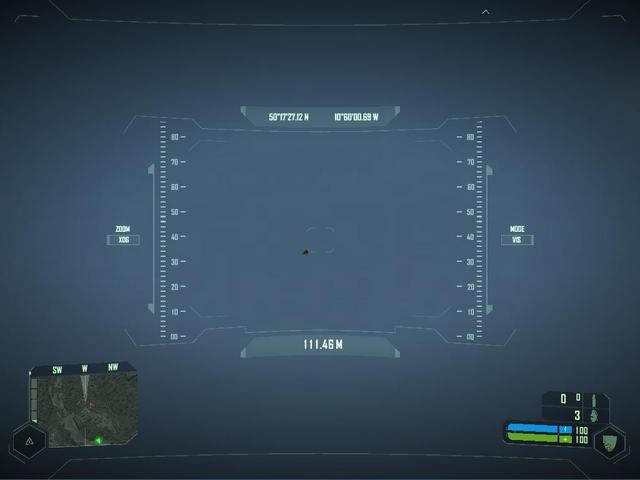 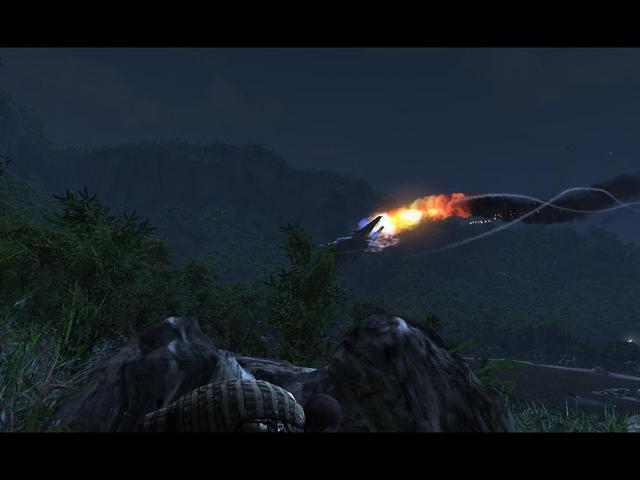 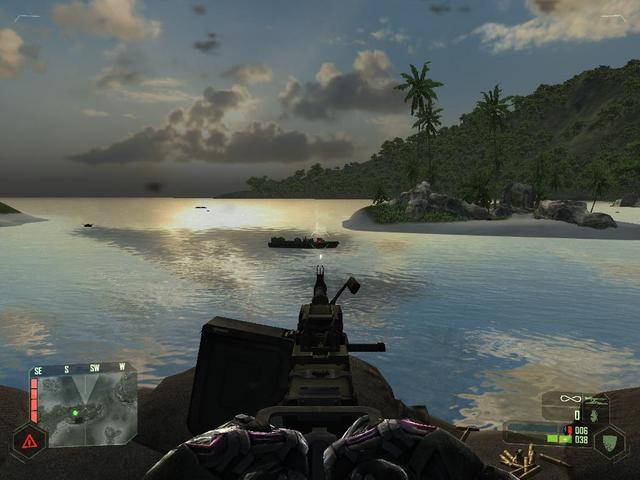 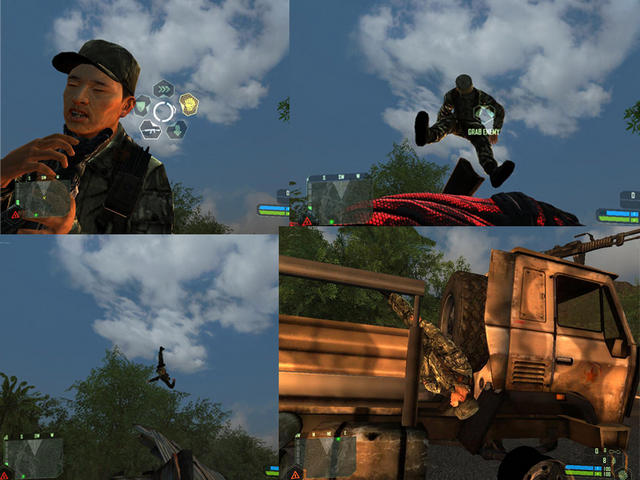 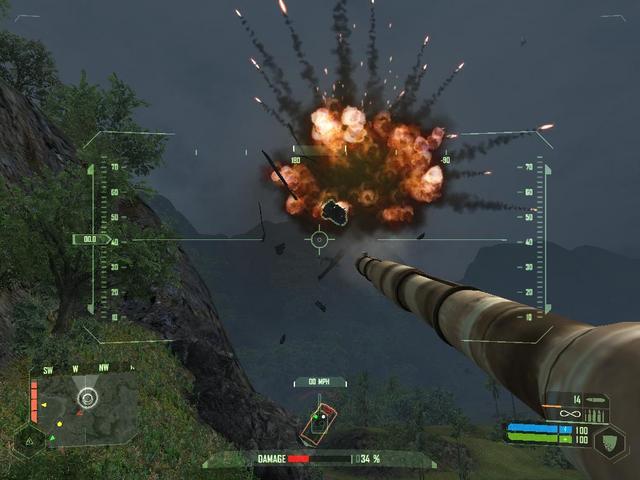 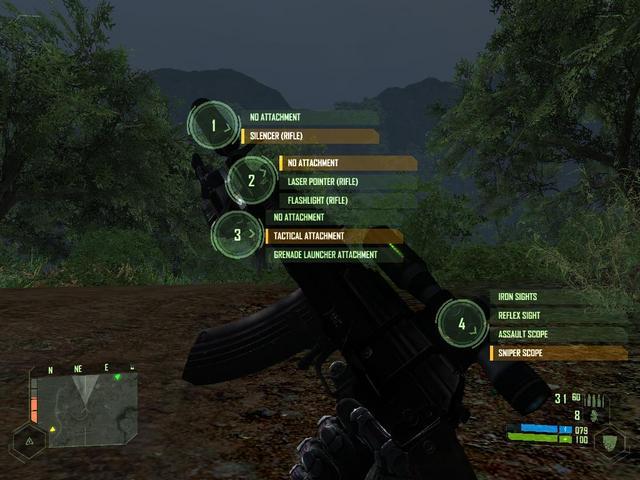 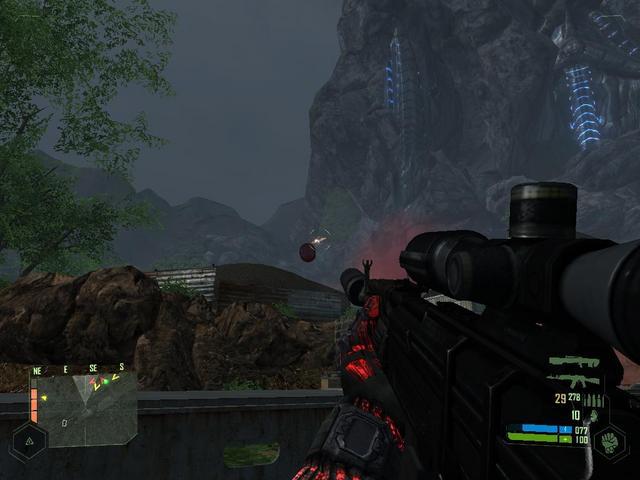 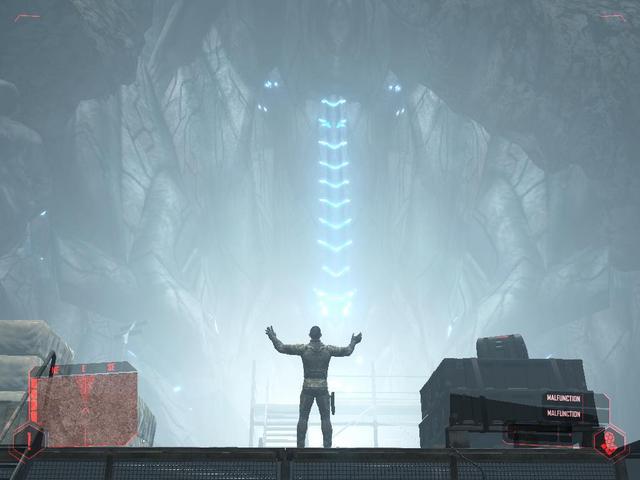 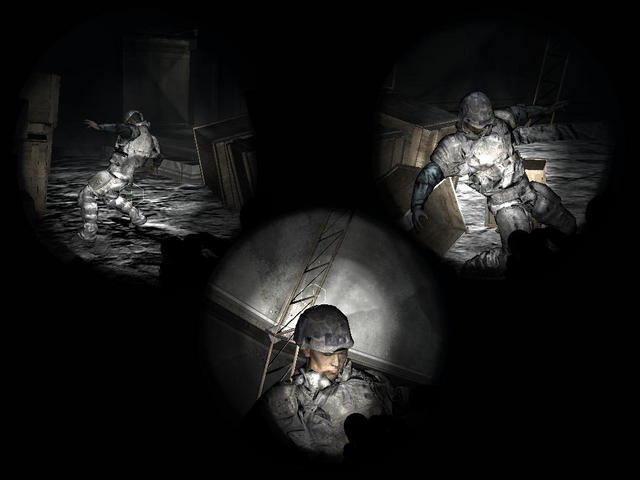 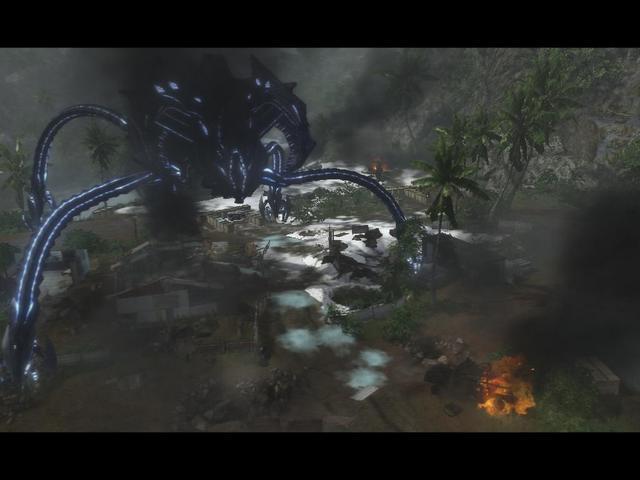 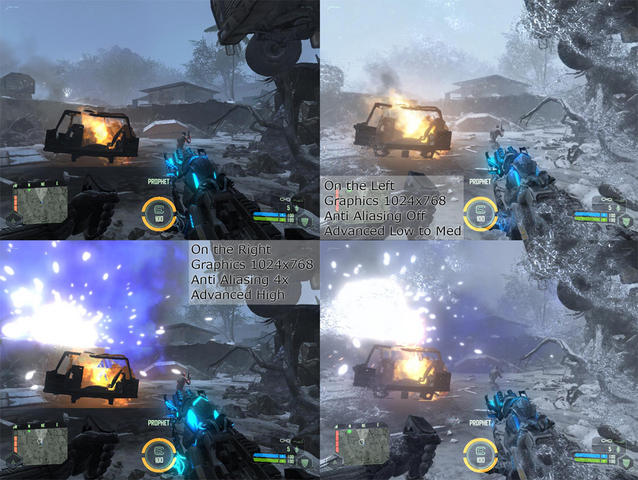 If I were to compare this game, I would compare it to the first time a man meets a stunning woman in the bedroom. A whole load of tension and excitement, as you stand dressed to impress. You have no clue what to do, but you go in for the kill, fumbling here, messing up there. Finally you try your hardest, using all your special abilities, and fairly badly, hoping no one notices. Afterwards you think you have done pretty well, so you turn to her and ask the immortal question "Was it good for you?" to which you get no response.

Wow, the hype and mystery surrounding this game is immense. Even now there is a vague misty fog over this title. The truth is that Crysis will run on the XP and on Directx 9.0c, but of course you won't get the full graphic range of Vista and Directx 10.

However all is not lost, there are cracks for Crysis that will bring it up to near Vista standards. Of course your machine will need the ability to warp the fabric of space and time for the extra high settings.

The timing couldn't be any worse for Vista, as this game runs slower compared to XP, even with the new service pack 1 (just released for Vista!). Added on top of that, Service pack 3, for XP, is set to really ramp up the speeds. This is another blow for Vista, the new flagship OS for Microsoft! I know I won't be converting anytime soon!

The game starts with you bearing witness to some shoddy acting, landing on a beautiful tropical Island, and dressed in an advanced Nano suit. In that short moment of time you learn that you an elite soldier called Nomad, and that your suit is damaged in the landing process.

Only a few seconds into the story and your Nano suit is completely fixed and battle ready! What ...? Two things here, why did they bother to introduce the "only joking" storyline into the plot at all? It seems like they were thinking about taking away your abilities, but could not come up with a story plot that would explain you getting your abilities back. So they said "What the hell just give it to them from the start!"

And secondly, as a rule, giving you all the abilities from the start is never a good thing to do! The main reason you should never do this is that games work on a reward system. Do well, get more and become stronger, do badly and you learn to do better next time! What a really odd thing to do; until you find out that they aren't going to tell you anything! I mean nothing!

The first half of the game is you, while trying the suits abilities, doing many a stupid things! No practice, just send the soldier out with advance technology and hope for the best. This reminds me a little of the first world war, sending all those young men into battle with no tactics of weapons and modern warfare. Well I don't have to tell you how badly that went, but for the grace of god, the allies won, because it wasn't anything to do with strategy!

You are constantly in the deep end, trying new things, and find on the whole, it's not worth the bother in the first place. This is a real shame as you can do some really amazing stuff. Even then, how well you do is dependent on the amount of practice. This is what it all comes down to, perhaps, and this is a new notion, a training level before the game!

This is where the review should have ended, and it so nearly did. Many people will get to the stage where they leave this game and never play it again. Personally I left it and started playing other games. It was the fact that I wanted to do this review, and needed some more game experience, which brought me back to the game. (And I am glad I did!)

After mastering the four abilities, then you will realize the potential of the Nano suit! Strength, Armour, Cloak, and Speed; this is when the fun really starts. Because after that you realize that you can pull off combinations of these abilities. What is more, there are so many things you can do, so much so, that you can complete whole levels without firing a single shot. And ... I suggest that for the first levels you practice these abilities to a fine art! And ... I mean really practice!

As for destructible scenery, they have really gone all out on this game. But one of the main hurdles is the mind of a gamer. We are so use to thinking that things aren't destructible, that jumping, running, and punching are only backup functions. But this game pushes the boundaries in every direction, and really hard. Sometimes it fails, and sometimes miserably, it's a case of doing to many things at one time. But surprisingly this isn't a huge negative point; as it also encourages you to replay level, and try new things.

The first time I found out that the scenery was destructible, was when I was in a little hut, hiding from a helicopter. By the way if one does spot you, they will constantly be on your back. No amount of hiding, running, tree coverage, or cloaking will shake them off. Inside the hut I thought I was safe, but no, after constant pounding by the helicopters missiles, the roof collapsed in on me.

Imagine my "shell-shocked" surprise as I stood in the middle of the open jungle. Luckily there was a missile launcher nearby, and it was lights out for the helicopter, which had been annoying me for the last twenty minutes. This is another annoying factor of freeform gaming, they don't tell you anything. The reason why you can't dispose of the helicopter is because you have to find the right weapon for it. The only type they have in the game is a 3 shot disposable Missile launcher, which doesn't appear too often. But when it does you start to realize it has been placed there for a reason. What makes it worse is that they don't let you know where it is, not even a vague suggestion! This can mean 20 minutes of running around and searching, all the while a helicopter is raining death on you, and alerting all baddies nearby!

By the end of the game, you are the suit, and understand its abilities. For example I was, again hiding in a hut from approaching bad guys. And I needed a quick way out, so I planned to get up onto the roof and start shooting. Then I realized I didn't need to go outside, I punched through the roof and jumped up. As soon as I was in the clear, my cloak was on before my feet landed on the roof. It's that kind of thinking gamers aren't use to in games. The normal things in life are extraordinary in a virtual Sci-Fi world!

The beginning of this game is a freeform playground, while towards the end it becomes heavily scripted. The Irony is that by the time you are proficient with the Nano suit, is when the game starts to clamp down and limits your choices. By the end, you will feel that urge to start the game all over again!

Then there are minor bugs in this game, of which there are a vast number. Most go unnoticed, as they don't affect the gameplay in anyway. But for example I picked up a frog, not even in maximum strength, and threw it in the air. Just to see what would happen, I think he is still in orbit, see the 3rd picture down!

Weapons are completely modifiable, each attachment you pick up, is swappable among all your current weapons. For example a shotgun with a sniper scope, is completely plausible, impractical, but still the choice is yours.

As for the range of weapons, there isn't a whole lot. The main weapons are the SCARs, The Chinese AK, Shotgun and grenades. There are other weapon systems around the place, but too few. However within the context of the story it is plausible i.e. deserted Island, limited weapons and ammo. Of course when you get towards the end, you will get an alien weapon, which is some kind of freeze ray.

Again; the irony being that the first half, weapon use covers your lack of ability in the Nano suit department. And in the second half, you are forced to use weapons more than you would like. Preferring to fight the Aliens, big tentacles to Nano suit, "Mano ah Alien!"

Finally the graphics, there is no emoticon to describe it! And of course, this is the most demanding game at the moment. It is a given that the graphics are superb, and that few people will play with the "Very High" settings. Most will have to put up with low to medium settings, which takes away from the attractiveness and feels like a kick in the teeth.
(See the last Picture, Right hand side is "Near Directx10", the left is "Playable Graphics")

Crytek should have realized the specification problem, and should have released a low specification model. This would have increased the games popularity and playability. Instead most people will fear this title and leave it on the shelf (I have heard rumours, this game was so powerful that it destroyed computers, yes, broke them due to the strain of running!). The ones that buy it will only play the beginning levels and believe it to be rubbish. This is a great shame, but the blame is laid firmly at Cryteks feet.

If I could say anything about this game, it is a great effort, with lots of little flaws. Sometimes there are too many to make this game enjoyable. Then other times, you just want to start the whole game again, just to try the "Helicopter Grab" or "Jeep Punch" trick. The worse thing about this is more than likely your machine won't be powerful enough to play the game in high settings. So with that said, was it worth Crytek going to the extra lengths just for the graphics? Is it any better than the current games on the market? Is it a good Game?

The word is yes, but at times it was a constant uphill struggle, and in the end, on the top of the mountain. I can see where this game is amazing and the times it was absolutely appalling. Then I can see where this game has given you complete freedom, and yet the times when it's so scripted, it's a bit stuffy! I have seen the pure poetry of a well-designed level, and the disgrace that is the Enemy AI. In the end I could not decide, so this game review is just my opinion, and yours could differ!