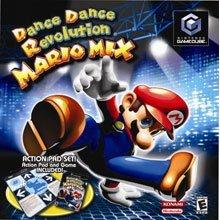 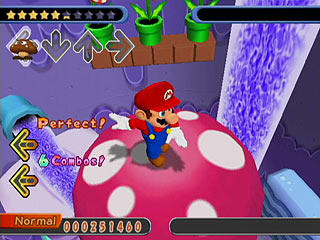 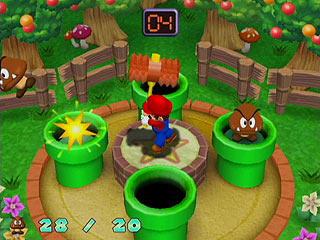 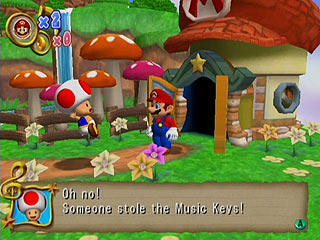 This was given to me as a birthday present a good few years back, and the only reason I got rid of it is because my niece and nephew would fight over "whose turn it was" when they played.

In essence, the title of the game basically sums it up. It's a DDR game that incorporates the Super Mario Bros. characters, worlds, and music. There are a few different gameplay modes - there's the story mode (essential for unlocking all the songs); there's a "free-play" mode in which you can play the songs you unlock in story mode at higher difficulties; there's a "calorie count" mode which counts the calories you burn as you dance. Those are just a few of the modes. There are also a few mini-games incorporated into the story mode (which you can also play outside of story mode) which utilize the dance-pad as well.

This isn't just your average DDR game, either. On certain levels, there are things other than arrows that scroll up the screen - bob-ombs, fireballs, goombas, turtles, etc. Some of them give you bonuses for stepping on the arrow which the thing scrolls up (hitting goombas and turtles gets you extra points); others punish you (hitting the bob-ombs will hurt your score). There are also coins you get (from the mini-games) with which you can buy items that help you in the dancing parts.

The plot is weak, but I can't really think of any other DDR game that actually has a plot, so take it for what it's worth. Basically, the "music keys" of the Mushroom Kingdom are stolen, and you, as Mario, must get them back by having dance-off's with various Super Mario Bros. villains such as Waluigi, Wario, and more. The story mode moves kind of slowly, and the first time you play it, you must play through on ridiculously easy difficulty. Seriously, my nephew, who was 5 or 6 at the time I had the game, could play through story mode no problem. As you beat the story mode at lower difficulties, higher ones are unlocked.

One of the finest elements of the game is the final dance sequence. It utilizes the items scrolling up the screen with the arrows, but these items are pieces of a rocket. If you step on all 3 pieces in time, the rocket will assemble and attack the final boss (I won't reveal who it is, but it's probably pretty obvious). If you just dance to the end of the song without getting the rockets to hit your opponent enough times, you will lose, no matter how well you did on the dance. It's a fun battle element added to a simple dancing game.

Many would wonder what music was put into this game. Most of the music comes from Nintendo games - Super Mario Bros. 1-3, Donkey Kong, Wrecking Crew, and various Mario Kart games, just to name a few. There are also a handful of songs from the classical genre - Mozart's "Eine Kleine Nachtmusik" and "Turkish March" are both included, and composers like Bizet, Strauss, and Elgar are included as well. There's even a version of "Way Down Upon the Swanee River." The wide range of music provides a well-rounded musical feeling, as well as providing enjoyable dance remixes of old classic game themes.

Replay value is high, as you can play each song in freeplay mode at 5 difficulty levels - each of which need to be unlocked by getting good scores on lower difficulties. Plus, it's DDR - there's always a good reason to play DDR.

Overall, the game is very well put together. I've never liked Toad, and he's your guide throughout story mode, but that can be overlooked by the sheer greatness of the game itself. The graphics are quite good for the Gamecube, the sound is excellent, and the enjoyment factor is very high.