The game is built to be as absolutely enjoyable as possible; the world, explored to its fullest; and the story just pushes you to find that next Daemon to conquer. You will certainly enjoy yourself while playing Darksiders. 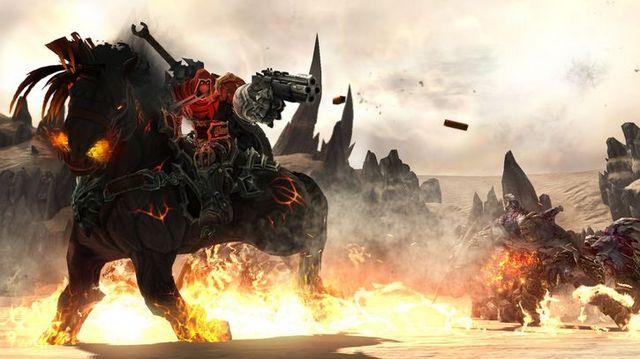 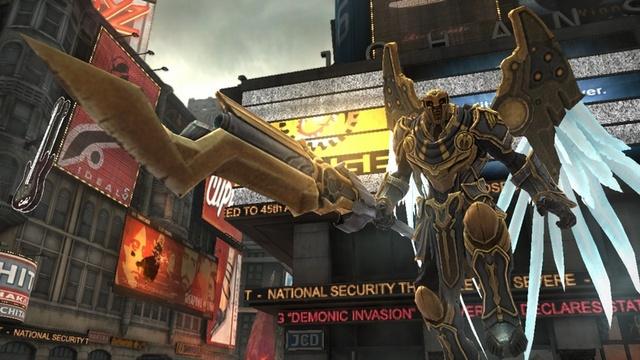 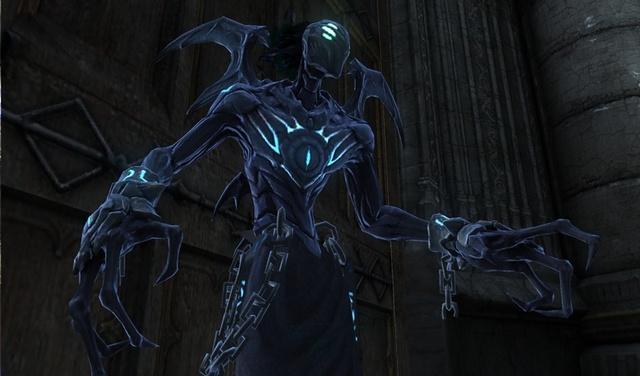 Darksiders presents itself as a carefully executed action-adventure game that almost prides itself on taking the best parts from our favorite games. I've heard others mention it is like God of War and Zelda. Many have said it resembles the Devil May Cry series with bits of games like Portal even making a "cameo" of sorts. Whatever games it may resemble, Darksiders, in and of itself, is unique enough to hold its own against other action-adventure games. If you enjoy any of the aforementioned games you will certainly enjoy Darksiders.

The game immediately thrusts you into an already running story, leaving you a little out of the loop until later in the game. You take control as a "War", one of the 4 Horsemen of the Apocalypse. Seemingly, you have been betrayed by someone of a higher authority than yourself and you are put on trial before "The Charred Council". They find you to be a suitable candidate to both redeem yourself and clear your name, while also preventing the unauthorized breaking of the 7 seals of Apocalypse. With that, your story begins as you seek to take vengeance upon the various servants of the "Destroyer" but only under the attentive eye of the guardian assigned to you, the "Watcher", as he pulls just the right strings to get you to do the Charred Council's ultimate will.

The gameplay itself is absolutely fluid, allowing you to control War with the utmost of ease. Stringing combos and finishing moves is extremely easy with a wide variety of enemies to tackle. With a large arsenal of weaponry, the combat is never dull throughout the entirety of the game. Enemies range from small skeletons that go down quite easily, to huge demons that take a little cunning and skill to conquer. You have the flying Angels from Heaven adding another vertical element to combat and even farther along in the game some enemies on horseback. Boss enemies are on a massive scale, with each having their own weakness, usually associated with that level's special weapon. The Boss battles present an excellent challenge to find that weakness and to figure out the Boss' pattern; making the battle both an intense, heart pounding experience but also taking a little smarts to finish them off.

Each individual level has an excellent atmosphere ranging from Crypts and Deserts, to rundown Human buildings and highways. They present new challenges and hide a plethora of secrets and unlockables. You have typical Health and Magic upgrades to help you out along the way, but also there are various exchangeable upgrades available for your 3 main weapons, a Sword, a Scythe, and a melee Gauntlet. Each upgrade ranges from extra experience points for that particular weapon or extracting more souls, the game's currency, from any enemy killed with that upgraded weapon. They can be switched on the fly at any time throughout the game giving yet another positive aspect to the combat.

If the Darksiders score sounds familiar, it should. The Award-winning composers Cris Velasco (God of War series, Clive Barker's Jericho) and Mike Reagan (God of War series, Conan) created more than 60 minutes of original work for the game. In each new area, the music is spot on with the environment, with brilliant music appropriate for every situation. The voice work and dialog goes very well with the game. Liam O'Brien, the voice behind War, does an excellent job along with Mark Hamill, the voice of the Watcher. Each new demon you meet sounds more imposing and cunning than the last, with the Watcher making for a slithery, reluctantly helpful, but necessary component for your task.

While everything presents itself well and balanced the game does have its down points. At least one point in the game I became very bored, almost to the point where I wanted to put down the game. I pushed through and thankfully it came out great in the end but for about 2-3 solid hours the game really made it monotonous and dry. Where the story is something we all have played before, Vigil did an excellent job making it their own. Angels and Demons are not new, the story is nothing award-worthy but it is unique in and of itself. The story does move very quick and I was able to complete the game 100% in about 20 hours time. Could be a good thing or a bad thing, as adding any more length to the game and I would have found the time to combat ratio on the less appealing side.

While Darksiders may not win any awards, that does not make it any less enjoyable. For the most part I thoroughly enjoyed it, save for that one little hiccup. The game continues to get bigger and bigger with more enemies presenting new combat challenges and additional pieces of equipment making exploring a lot of fun. That is really what it boils down to; is Darksiders fun? The answer is in short, Yes. Is it worthy of keeping on your collection shelf? Maybe not, due to its short length and no real replayability. The game is built to be as absolutely enjoyable as possible; the world, explored to its fullest; and the story just pushes you to find that next Daemon to conquer. You will certainly enjoy yourself while playing Darksiders.
Review Page Hits: 2 today (600 total)
mediahook