From The Depths Of Dreams EP (Senses Fail) 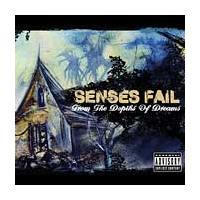 Senses Fail is something more than just another Thursday rip-off (something that I made them out to be when the original pressing of this EP was released on ECA Records last summer). I can remember downloading a few songs by this band back when they had less than 5,000 plays on Mp3.com. Next thing I know, Drive-Thru picks them up. Small world eh? With an enormous amount of these post-hardcore emo/screamo bands popping up everywhere, each new release seems to get less and less entertaining. Senses Fail is an exception, combing faultless guitar melodies, poetic lyrics, and shrilling screams.


'From the Depths of Dreams' begins with a track called "Steven". It's a song about a friend who died and it's the first song I had ever heard from these kids (each checking in at around 18 years old). The song kicks off with a small drum build up until you hear the scream "(Goodbye)". It's been done before, but it works well here. The song quickly picks up and soon enough you have the sound of multiple background voices overlapping, similar to Brand New and fellow New Jersey natives Taking Back Sunday. "Steven", like the majority of the tracks on this EP has vocals that borderline on shouting, then cut to dark screams at precisely the right moment, creating a great effect. Backing vocals are also key in Senses Fail, and as I mentioned earlier are very prominent in this track. The second single, "Free Fall Without a Parachute" shows just how dark and downright frightening some of Senses Fails lyrics can be. "I had a dream last night and in my dream I robbed a country club. A 5 year old tried to stop me, but I shot him through the head, and now he's dead." The song maintains the energy level of the previous track, even with additions like a piano. "Bloody Romance", the third single off the EP can be found on the 2003 Vans Warped Tour compilation. It combines non-standard drumming, driving guitars, great screams; an overall very driving, powerful song. "Dreaming a Reality" is the fourth single (yes, the first four tracks have all been released). The song starts out soft then increases to driving punk rock, almost similar to Alkaline Trio, only not really. Once again here's another track that depends on backing vocals in the chorus, yet the riff leading up to the chorus keeps me hooked. "The Ground Folds" is another hard-hitting track, bearing resemblance to the great Thursday. On the slower side, the song is almost too drawn out, but the lead riff during the second verse saves it. The riff in "One Eight Seven" sounds so familiar; you would have thought it was stolen. Here's a prime example of Senses Fail's great lyrical boundaries, bypassing similar artists like Brand New and Taking Back Sunday, going more graphic and detailed. "You ripped my heart out, you tore my eyes out, now you're gonna pay, I'll stab you one time. I'll eat your heart out so you feel my pain." Of course, those lines are screamed for added effect. "Handguns & Second Chances" is one of the two bonus tracks on this reissue release. While some may argue that they don't add much, I enjoy the song quite a bit. More deep poetic (and violent) lyrics, a barrage of tempo changes, non-standard drumming, dueling guitars, and of course spoken word, complete with effects on the vocals. This brand new song shows that Senses Fail show no signs of slowing down and will definitely be a band to watch in the next few years. Rather impressive. The second bonus track is "The Ground Folds (Acoustic)" and personally I enjoy it better than the original, a great way to end the EP.

In addition to eight impressive emo-core tracks, 'From the Depths of Dreams' is also enhanced, and while it doesn't feature elaborate things such as games or videos, the information found inside is quite interesting. A nice little package; props to Drive-Thru for picking this one up.