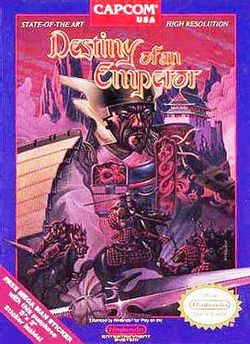 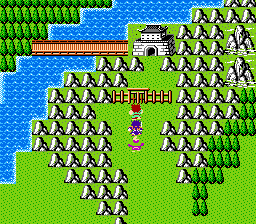 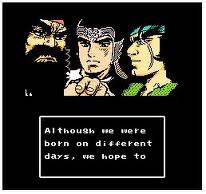 Destiny of an Emperor is one of my favorite RPG's, not only for the NES but for all time. I thought recently that perhaps I needed to revisit it; since the 5 years since I had played it may have made it old and boring compared to the new incarnations of RPG's. It remains a potent and engaging RPG to this day. The game is based on Hiroshi Motomiya's Manga, Tenchi o Kurau, which itself is loosely based on the Romance of the Three Kingdoms story that takes place in ancient China. You initially play Liu Bei as your main character, fighting as the warlord at the head of his ever-increasing army. The initial goal is to defeat a band of rebels known as the 'yellow scarves', but the storyline develops soon into an attempt by your army to unify China and bring peace back to the land.

There is only so much that can be said about graphics here. It was a game for the NES, and the graphics were good if not great for the time (1990) without being on a next-gen console such as the SNES. There is no lag on the graphics, there are no flashes to the screen and it renders perfectly fine - 'nuff said.

The music is excellent as per what can be expected from the NES system. There is a dedicated track for when you enter battle and a city, and the map music changes as you progress throughout the land. It is engaging without being overt or annoying. It keeps to the theme of ancient China by being similar in sound to some old Chinese melodies. The sound effects are not very developed, but again this seems to be the norm for an NES console game. Also sound effects are not a key element to this type of RPG and thus they may have distracted from the game had they been developed further.

Gameplay is streamlined and rarely do the mechanics of the game become frustrating. I found that the control of the main character - because you move relatively fast in the game - can sometimes overshoot an entrance or a person to talk to. But this never threatens in terms of having to reset or start some element over again. The biggest issue with the game would have to be the strategies (kind of the magic) of the game. Because they are translated from the Japanese into English versions of their sounds (i.e. 'An Sha' or 'Bei Jing') there could be difficulty playing this game without a manual. With the internet close by this is less of an issue but if you don't want to have to look up each new strategy as they come available, or have to test each one, then you need the manual or a list of the strategies copied down beside you. There are also times when it is less than clear where you are to proceed to next in the game. This will bother new-gen gamers since new games lead you by the hand through the game. I like it personally as it gives an element of "necessary frustration." Why should we always know where to go next?

The biggest problem I have with this game is the encounter rate. It is incredibly high at some points in the game. I know for a fact that I have fought eight battles in the time it took me to walk 11 spaces. That is just unreasonable and excessive.

Gameplay has some excellent features as well. A well integrated 'reasoning' for the Hit Point system. A character's hit points are the number of soldiers in their army. Soldiers reach zero and your General of that army is unavailable until a resurrect is used on them (it is unclear as to whether they 'die' or what happens, but since it is a resurrect, you need to use I guess they are dead). The Strategist in your army is the one that controls what is effectively the magic in the game. However, they do not limit just that character to using it, the Strategist provides each General with the ability to use those strategies each turn if needed. While the strategies are not as necessary early in the game, without them later on it would be near impossible to finish the game. Probably the best feature to gameplay is the 'All-Out' choice on the battle screen. This allows you to quickly fight easy battles without deciding tactics for each player in the line up. So instead of a battle taking a minute or two, it could take 5-15 seconds, depending on the relative strength of the attackers to yourself. This intensifies the action in a genre that is known for being slow and sometimes dull. Actually, I would consider the 'All Out' as one of my favorite gameplay features of all time.

The learning curve mark suffers for me on this game because every time I play it I need to look up what the translated strategies are, I get lost in the caves, and frustration seeps in when the opponents use 'An Sha' all the time (An Sha is an assassination magic, it kills one of your armies completely). But that is just nit picking as these are also reason I go back to the game. It remains frustrating and fun and clever and everything even after playing it through perhaps 6 times now.

The replay value on Destiny of an Emperor is extremely high as it is an engaging game, full of battles and hidden items, with a huge amount of playable characters and strategies to employ. There are many situations to perform quests differently and there is almost no 'grind' to speak of. The game can be played start to finish without having to gain levels in order to proceed. How many games from this era can you say you would play from start to finish every three or four years? This is one of maybe 5 NES games that I can say that about.

All in all, for a 20-year-old game this is still one of my favorites from the RPG genre, as it is fun, engaging, smart, frustrating and gives a long play experience (25-40 hours) for this old of a game. You really can't go wrong with picking this one up.
Review Page Hits: 0 today (182 total)
mediahook