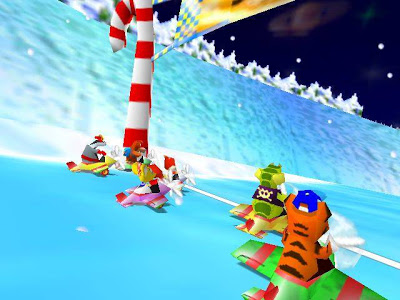 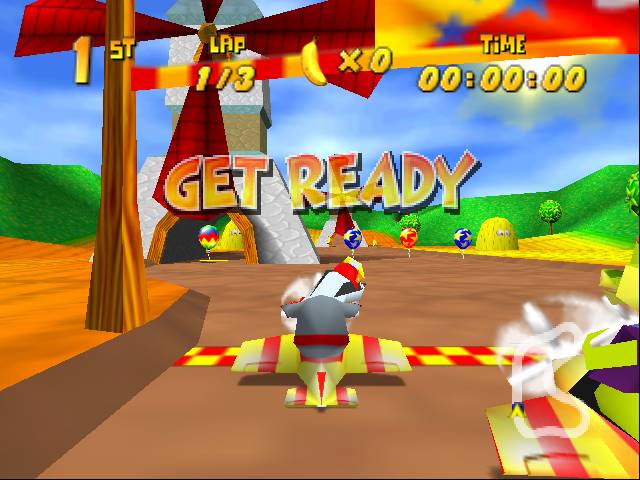 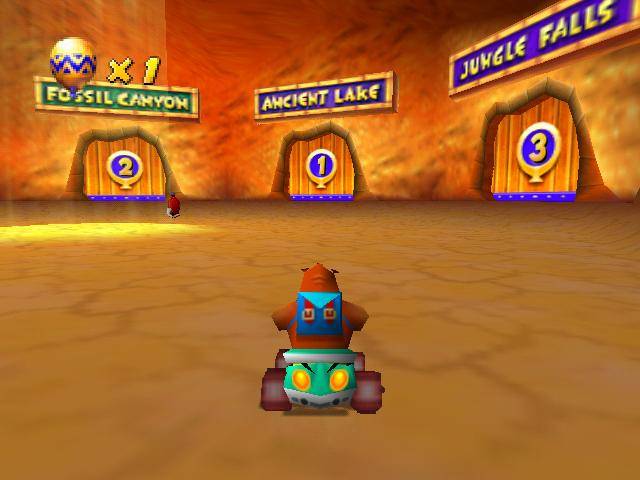 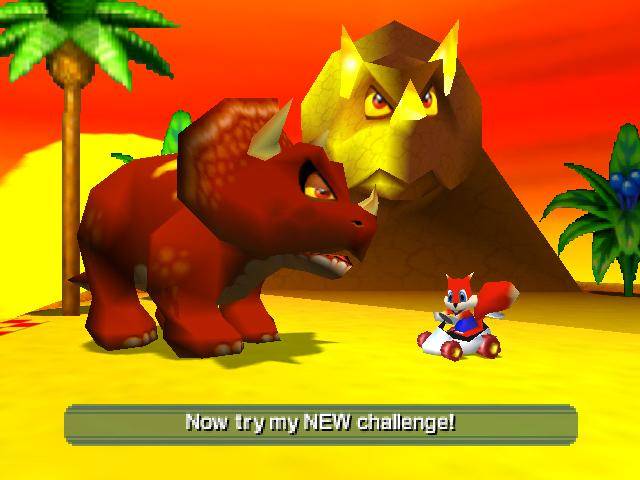 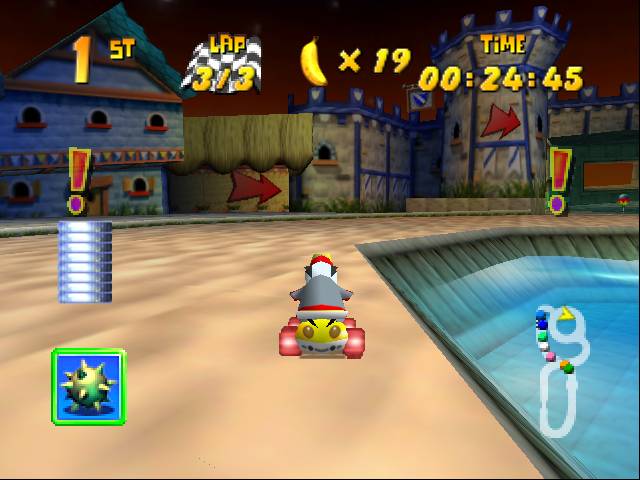 Up until November of 1997, Mario Kart 64 had a stranglehold on the multi-player kart-racing mindset. It's because that November, Rare's Diddy Kong Racing roared onto the Nintendo 64 with more options, more things to do, more tracks, more racers, and (subjectively) more fun. Here's why Diddy Kong Racing revs its way all the way to first place.

In order to get the full story (of what little there is) of Diddy Kong Racing, you'd need to check out the instruction manual. Otherwise you're just thrown into an adventure with little direction. A friend of Diddy Kong's, Timber, is in trouble. His parents are away, and an evil invader known as Wizpig has arrived on Timber Island to take over. With the help of a genie pachyderm named Taj, and a little help from friends far and wide, it's up to Diddy Kong and company to save the island and give Wizpig a going away party that he'll never forget.

The cast of Diddy Kong Racing stars none other than Diddy Kong, as well as several one-off characters: Timber the Tiger, Pipsy the Mouse, Bumper the Badger, Drumstick the Rooster, and Krunch the Kremling. There's also several characters that would make appearances in future Rare games such as Banjo the bear of Banjo-Kazooie fame, Tiptup the turtle who would make a cameo appearance in said Banjo game, and Conker the squirrel who is apparently bipolar, as he appears cute and cuddly in this game but in Conker's Bad Fur Day he's violent, foul-mouthed, and grumpy. Alas, that's the life of a squirrel.

The main single-player mode is Adventure which can be played with two players via a magic code. Already, this is awesome. Adventure mode's goal is to collect as many golden balloons as possible. You collect these helium-filled beauties by completing races in first and finding them hidden around Timber Island. There are five themed worlds in Diddy Kong Racing connected by a decent-sized overworld. Each world has four races, and you can only enter a race if you have enough golden balloons. Once all races are won, you take on the boss of the world in a one-on-one race to the death... well, maybe not so much to the death as to the embarrassment. You'll take on a bubble-spewing octopus, a dragon who sounds like the former governor of California, a tricky triceratops, a blubbering blue walrus, and of course, Wizpig himself.

After a boss is defeated, he will challenge you to collect all eight silver coins in each of the tracks in his world. They're placed in hidden and precarious positions along each track. You must collect eight coins and win the race to get another golden balloon. Once that goal is finished, you once again challenge the boss to a more difficult race. For example, Sherbet Island's boss shoots out mines the first go-round which will impede your progress while the second go-round will have the same octopus shooting out entrapping bubbles, which will cost you even more time if you hit them. With the boss defeated, you earn a piece of the Wizpig amulet. Collect all four and you get to take on Wizpig in a not-so final showdown.

There are also trophy challenges to take on, where you play all four races in a world one after the other, grand prix-style. Additionally, each world has a hidden key in one of the four tracks. These are fiendishly hidden and will take a lot of searching (well, except the first one). Grabbing a key will unlock the door to a bonus mini-game. These range from collecting ten bananas before your three other opponents, to grabbing and hatching three eggs, to battling it out to the death... well, maybe not so much to the death as to the elimination in a battle royal competition. Completing these will earn you a part of the T.T. Medal which is the only way to take on Wizpig a final time.

What's even cooler about the Adventure mode is that once it is completed, you can take on Adventure Two where all the tracks are reversed, the racers and bosses are harder, the silver coins are placed in more devious locations, and gold balloons are now differently colored. Once again, you can take on this mode with a friend, which makes for some serious fun. Of course, in silver coin challenge races, only one of you needs to collect all the coins and make it to first. Furthermore, whoever won the last race controls their character on the overworld and in boss races.

There are twenty tracks in all to compete on. The first group all takes in a prehistoric world, the second in an icy wonderland, the third on a tropical beach, the fourth in a forest, and the fifth in Wizpig's outer space realm. Tracks are masterfully designed with plenty of twists, turns, hazards, and shortcuts to look out for. While one track has you watching out for a giant dinosaur that wants to crush you, another has you dodging laser fire from all directions in a spaceship. These tracks are fun to explore, fun to race on, and fun to challenge yourself on in the wonderful time trial mode.

Speaking of which, most tracks have three different versions. What do I mean by this? You can choose to race cars, hovercrafts, or airplanes on them (save for Adventure mode where these are predetermined). Cars are your standard kart-racing fare, while hovercrafts control loosely and can race over water with ease. Meanwhile, planes are high-fliers which can perform barrel rolls and flips with a double tap of the shoulder button. Each type of vehicle has an optimum path it should follow in a given race, which allows for different strategies depending on the vehicle chosen.

The control of Diddy Kong Racing feels tight for the most part, with hovercrafts feeling a tad loose as they should. You can drift around corners, drive over speed-increasing zippers, and press brake and the shoulder button to make a tight turn. Much like Mario Kart, items are an important part of the game, but unlike Mario Kart, they don't always make the difference between victory and defeat (hello, blue shells). In Diddy Kong Racing, there are five different varieties of balloons. Reds are missiles, green are projectiles that you place behind you, blue are boosts, yellow with purple stars are shields, and rainbow are magnetic-propelled, which attract you to players ahead of you. Collecting two or more balloons in succession will give you a stronger item to use. For instance, collecting two reds in a row will turn your ordinary missile into a homing one, and collecting two blues will make your weak boost into a stronger boost.

Visually, what more can we expect from the early days of the Nintendo 64? That isn't to say the game is strikingly ugly, but it obviously has aged. The colors are still as vibrant and bright as ever, and the framerate seldom slows down, unlike future Rare games. The soundtrack by former Rare composer, David Wise, is masterful. Just masterful. There are so many memorable tunes here to listen to and enjoy. It's a real treat.

Diddy Kong Racing doesn't just beat out Mario Kart 64. It's the best racer on the entire system! No other kart racer on the system comes close in accessibility, fun, secrets, tracks, racers, and longevity. If you're stuck between this game and the ill-fated port on the DS, take no substitute for the original. It's just an overall better game. Diddy Kong Racing takes what's fun about the kart-racing genre, adds in an N64-era platform game style of collection, and turns it all on its head. For the optimal kart-racing experience, check out Diddy Kong Racing on the Nintendo 64.
Review Page Hits: 2 today (979 total)
mediahook