The Kongs are still here to perform for you. Even if you don't know the words, I suggest you join them anyway. 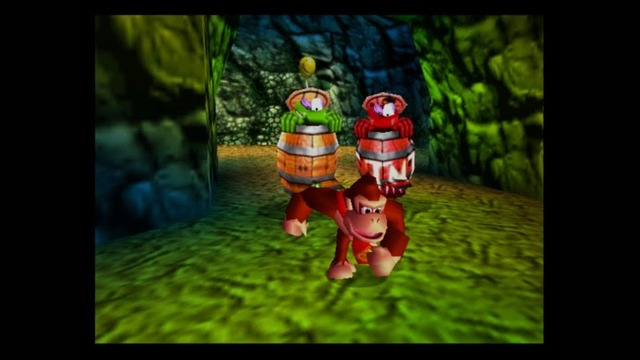 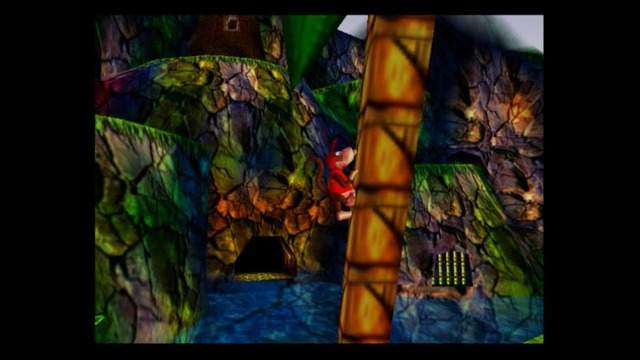 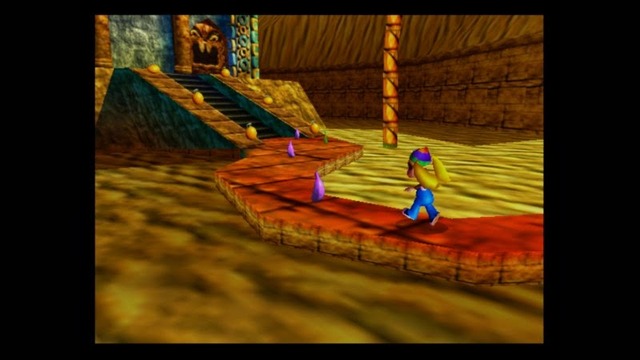 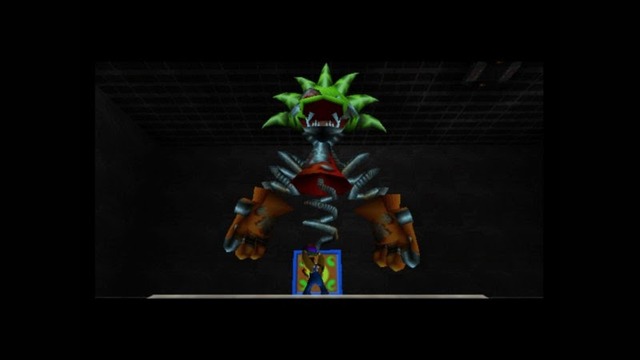 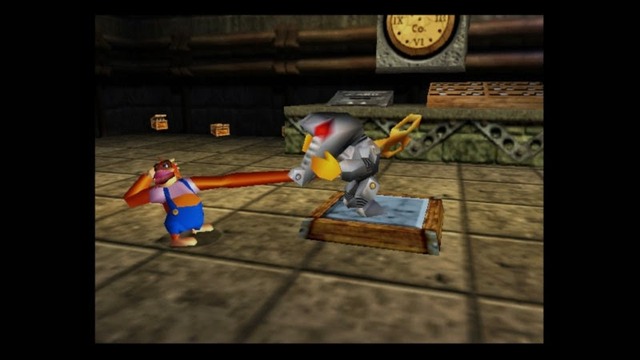 The collect-a-thon. It used to be such a staple in gaming, and I associate it with a much lovelier time in gaming. With the reveal of Yooka-Laylee from former Rare employees (the same ones who worked on one of my favorite collect-a-thons, Banjo-Kazooie), it seems like a great time to talk about one of the more severe cases of the genre of 3D platformer, Donkey Kong 64. Whether it's overwhelming with the amount of doodads to nab or not, DK64 is indeed one of Rare's more polarizing titles that the studio developed under Nintendo's wing.

All is fine on the DK Island front until one sunny day turned cloudy, King K. Rool's fortress sails over the island. King K. Rool has his sights set on obliterating the Kongs and the island once and for all with the ship's powerful ray. Only one thing missing-- enough power to use it. While the ray charges, King K. Rool Kong-naps several of the Kongs, all the while allowing Donkey Kong to go after them. After all, the ray is surely to be charged by the time DK is done saving his friends, right? However, King K. Rool once again underestimates the resolve of the Kong clan who, after DK has saved them, need to team up to stop K. Rool's Kremling horde before the ray can go off and destroy their home and habitat.

After working on similar collect-a-thon 3D platformers in the Banjo-Kazooie games, Rare decided to up the ante significantly with Donkey Kong 64. This is both a blessing and a curse. It's a blessing because we, as the players, get double the play time of the Banjo-Kazooie games with DK64. At the same time, it's a curse because of how Rare went about adding hours to the game's tally.

If you have read anything about Donkey Kong 64 in the past, you most likely know already that the game is very heavy on the collectibles in the game. Not just those, but the collectibles necessary to even beat the game. There is, in fact, a lot to collect in DK64. From the 200 Golden Bananas that serve as the game's equivalent of Banjo-Kazooie's Jiggies, to 100 individual bananas for each Kong to collect in each world of the game, if you get any enjoyment out of collecting stuff, you'll be sure to get more than your fill.

Some find this incredibly tedious because many times you're returning to already visited areas of the game's worlds multiple times. Again, each Kong has their own batch of 100 bananas in their own color to collect, and many times you'll find that you'll have to reenter areas you've combed through as another Kong to find more bananas. One temple area in Angry Aztec, the second world of DK64, has a room that you have to return to three times at a minimum just to get all of the bananas in the room as three different Kongs. I say at a minimum because if you're like me and haven't played DK64 for a while, you'll probably have no idea which of the Kong's bananas need to be collected in that room. Thus, you're likely to have the wrong Kong for the wrong colored bananas.

Bananas are important to collect in each world, as they are the means of opening up the door to the boss. Banana totals do not carry over between worlds, so if a door in, say, Frantic Factory, the third world of DK64, requires 200 bananas (which it does, by the way), you need to collect all 200 bananas in that world. Of course, the total 200 amount is spread across more than one Kong. Once all of the bananas have been used to open the door blocking the Kongs' way to the boss, a battle against one of King K. Rool's fiercest minions will begin, pending you enter the door, which you can only do so long as you are the correct Kong. Winning the battle earns the Kongs a special key.

As for the Kongs themselves, you start Donkey Kong 64 with just DK himself. In the first world, Jungle Japes, Diddy is housed inside a cell, waiting for DK to rescue him. Meanwhile, Angry Aztec has two Kongs to save, Tiny and Lanky. Finally, Frantic Factory houses Chunky Kong.

Each Kong can be switched to via multiple helpfully placed barrels in worlds. You'll be doing this quite a lot throughout the game. Not only because each Kong has 100 of their own colored bananas to collect (though not all need to be gathered to beat the game), but because each Kong has their own set of abilities, weapons, and musical instruments exclusive to themselves.

Moves are taught by potions obtained from Cranky Kong in his laboratory around each world in DK64. However, they're available for a price: a set amount of coins. Unfortunately, like bananas, coins are colored, meaning that only one Kong can pick up their own colored coin. For instance, DK can only pick up yellow bananas and yellow coins. This can be annoying, but so can having to return to Cranky's shop five times with each Kong in a world, just to learn a move exclusive to each Kong. It sounds minor, but with all of the switching between Kongs you'll already be doing, this just adds to the tedium.

In each of the game's worlds, there are a maximum of 25 Golden Bananas to acquire, five per Kong. Even if one Kong completes all of the steps to make a Golden Banana appear, only that Kong can pick up that Golden Banana. Otherwise the Banana is just transparent and impossible to pick up for another Kong. Usually this isn't anything to worry about since most Golden Bananas are housed in locations only one Kong can reach anyway, but there are some occasions where you can futilely try to cheat the system.

The different objectives that the Kongs participate in to acquire Golden Bananas are highly varied. One would hope so, after all, with 200 different ones to collect! Between riding a mine cart in hopes of collecting 50 coins before its conclusion, racing against an NPC on a slide, playing Simon Says on a xylophone, hitting a switch and racing to the Golden Banana before the gate closes, and so many more objectives, Donkey Kong 64 will definitely keep you busy with different tasks to complete.

That said, some Golden Bananas are locked behind mini-games. What I mean by this is that sometimes you'll have done a serious platforming or puzzling challenge, and instead of acquiring the Golden Banana, you are welcomed with a barrel that takes you to a mini-game to play. Most of these are enjoyable enough, but as any Donkey Kong 64 player will tell you, Beaver Bother can go suck a Crystal Coconut.

One of the five Golden Bananas that each Kong can collect in a given world requires a Kong to find a certain buff Kremling to defeat, who will drop a blueprint. Taking this over to Snide, who is also one of the characters who has a location in each world of DK64 (Funky Kong and Candy Kong are the two others), will have the weasel give you a Golden Banana in exchange for the blueprint. The blueprints also give you more time to work with in the final world of the game, a mad race against time to reach King K. Rool's chamber before the Kremlings' destructive ray goes off.

Outside of Golden Bananas, regular bananas, coins, and blueprints, there are plenty of other items to collect, though most of these are things that need to be restocked through collecting, such as ammunition for each Kong's gun, watermelons (used to restore health), film (used to take pictures of Banana Fairies), oranges (used to throw as grenades), and Crystal Coconuts (fuel for each Kong's special ability like DK's invincibility).

However, there are two mandatory collectibles that are a genuine pain in the monkey butt to obtain, one more than the other. They are the Rareware Coin and the Nintendo Coin. Both are needed to open the final door in the last world of the game. One is collected by getting over 5,000 points in Rareware's first arcade game, Jetpac, while the other is much more difficult. You have to play through Nintendo's original Donkey Kong arcade game with one life and beat it not once (that just gives you a Golden Banana), but twice! For some that are better skilled with old school titles, this shouldn't be too taxing, but for the rest of us, it made what was an enjoyable game even with all of the collecting, turn into a maddening grind.

Donkey Kong 64 is remarkable in its visuals. Do note that this was one of the premier titles of the Nintendo 64's Expansion Pak. The game itself runs relatively well. There are moments where the game and music chug. One such moment is outside the lighthouse area when the lighthouse is lit in Gloomy Galleon. This is while King K. Rool's ship floats around the lighthouse. To be fair, there is a lot going on at that particular moment. Most other times, the performance of Donkey Kong 64 behaves itself.

The game exudes charm from the death animations of enemies, such as Klump's way he salutes as he falls with a stiff posture to the ground, to the environments, such as pictures of Kaptain K. Rool from Donkey Kong Country 2: Diddy's Kong Quest within the innards of Gloomy Galleon's sunken pirate ship.

How much you like Donkey Kong 64 comes from whether you mind collecting a myriad of objects or not, and whether or not you mind backtracking multiple times through worlds. Sure, the game's Bananaporters-- teleporters that allow for rudimentary fast travel-- are helpful with this, but there's still plenty of traveling between the hallways, alleyways, and pathways that split up each world's larger areas. Again, all this traveling adds up. Some call a lot of the collecting and backtracking through levels filler, and I can totally see the rationale of that argument. However, as someone who grew up loving 3D platformers of this type (e.g. Super Mario 64, Banjo-Kazooie, Jak and Daxter: The Precursor Legacy), Donkey Kong 64 scratches a familiar itch, one that I mostly kept saying, "Ooh, yeah... just a little lower" to.
Review Page Hits: 0 today (526 total)
mediahook