When It Comes To Monkeying Around, The Third Time's A Charm! 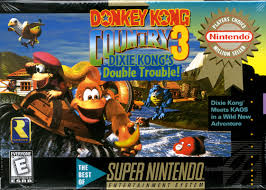 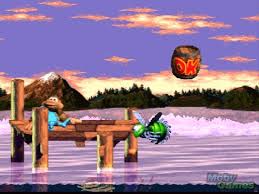 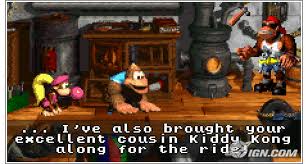 Released late in the SNES's life cycle, Donkey Kong Country 3: Dixie's Double Trouble has become somewhat overlooked compared to the original "Donkey Kong Country" and the critically acclaimed "Donkey Kong Country 2: Diddy's Kong Quest". However, DKC3 featured some of deepest gameplay in the Donkey Kong Country franchise to date. In DKC3, both Donkey and Diddy have been kidnapped, so you're left controlling Dixie (earlier featured in DKC2) who teams up with the infant Kiddy Kong. Controlling Kiddy is similar to controlling Donkey in the first installment (He's slower but more powerful than his tinier companion). Dixie uses her ponytail to helicopter-spin in midair, while Kiddy can tuck and roll right through large enemies. Additionally, Kiddy can pick up Dixie and toss her onto higher platforms while Dixie can toss Kiddy in the air to land on and smash through obviously weak patches of the ground that expose bonuses and secrets.

The level designs have all the familiar franchise elements but some innovations are presents. Most levels are the standard mix of platforming, jumping, and baddie bashing, along with the franchise's usual barrel blasting and rope climbing, but several levels add more levers, breakable walls and floors, small pools, and rocket barrels rides than previously seen. There are self-scrolling stages that involve mine carts, snow sleds, and buzz-saws. Riding atop of and transforming into animal buddies is once again present. DKC3 features the most collectibles in the franchise to find along with the K-O-N-G letters present in each level. The biggest structural improvement in DKC3 is the overworld map, in which you can move freely instead of the classic linear model. As you gradually progress on overworld map you can also find secret caves and SPOILER ALERT a hidden world. DKC3 also introduces Brother Bears who live in various places that initiate a trade sequence that grants access to even more secret caves. The bosses at the end of each of the eight worlds involve more creative challenges than the previous installments. You'll often find yourself memorizing patterns and timing movements to strike a boss at the perfect moment instead of the basic jump attacks that were sufficient to take down former bosses.

The graphics are among the best the SNES has to offer, with better detailed backgrounds and effects than the first two installments in the series. However, many of the familiar enemies from DKC and DKC2 have been replaced, though the new enemies are hardly novel. They primarily move and act the same as former foes. The soundtrack isn't quite as hip as that of DKC2 or as timeless as the original, but fits each level and situation well and add enjoyment throughout the game. Listen closely to see if the theme in Wrinkly's Save Cave doesn't sound eerily familiar to a classic Nintendo 64 game.

Overall, DKC3 may not change the minds of those who find DKC2 to be the best in the series, but it still commands praise. If you've played a previous Donkey Kong Country title and have always wanted to try DKC3 but never got around to it, there's no time like the present!
Review Page Hits: 2 today (705 total)
mediahook