Although it's gimmicky, it's quite fun. 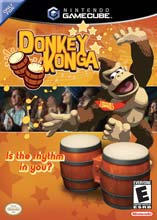 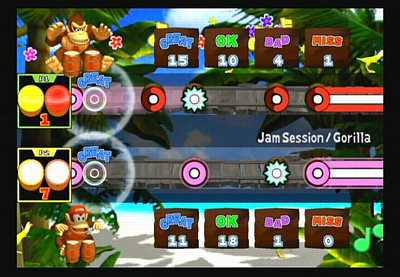 Who would have guessed gamers would be sitting in front of their TV's banging on a set of drums to a VIDEO GAME? Not me. Nintendo has done it again with this seemingly gimmicky, yet fun, game.

The pure look of this game drags it a bit, but I know that's not suppose to be the game's focus, so I won't moan over that.

The Audio is where this game shines; from kids songs to Blink 182 songs. Classics to symphonies even with Nintendo's own music on there (DK Rap anyone?). My MAIN gripe with this game which drags it to a high C is the lack of songs. The selection is very good, but there is so few of them. You'll have memorized them all soon enough (though they change on higher difficulties).

Of course, Donkey Konga isn't for the "mature" audience. It's not really aimed at anyone specifically. If you're looking for a good party game and have some $$$ to dish out, get some more drums and DK and his friends will have a very fun jam session.

Can't really recommend it, but I can't really say it isn't fun, because it is. It gets a good "so-so."
Review Page Hits: 0 today (897 total)
mediahook