A review for a spiritual successor to a game series I've never played. Any guesses on how this'll turn out, anyone? 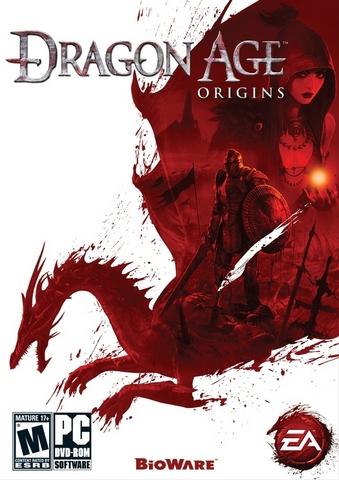 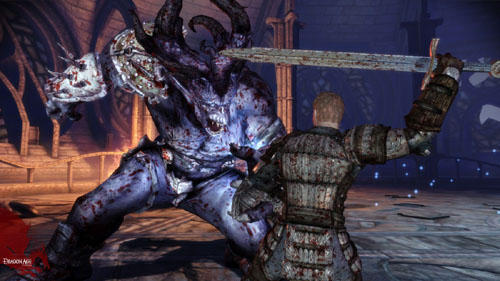 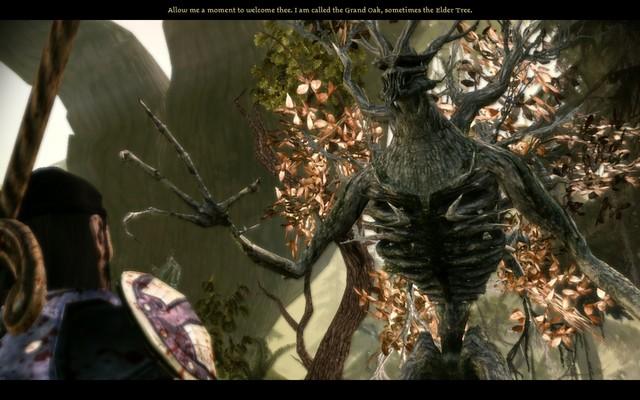 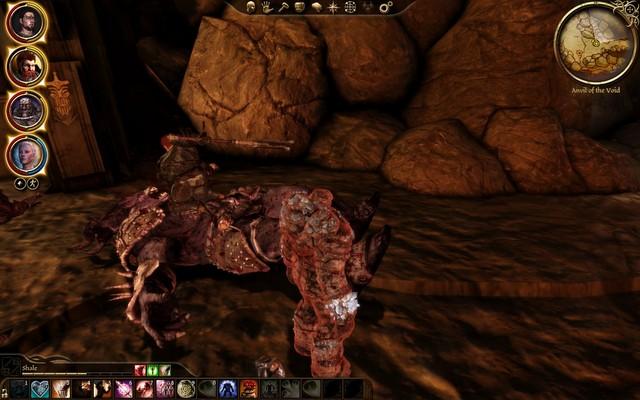 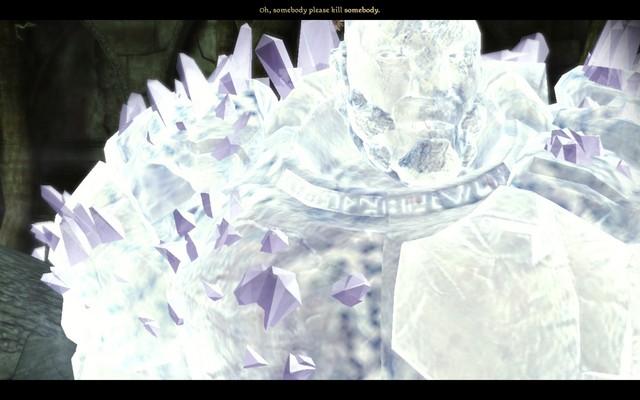 I can honestly say Dragon Age: Origins was an impulse buy for me. I'll admit that I had no real knowledge of the game prior to release, but the trailers and hype I found for the game was more than enough to make me preorder it about a week before release. Just thought that would be worth noting,

Dragon Age: Origins is supposedly a spiritual successor to the Baldur's Gate game series, but (and I guarantee I'll get some criticism for this) I haven't played the Baldur's gate series, so I can't make any great comparisons or anything between the two, and odds are I'll end up saying things in my review that will make people who HAVE played Baldur's Gate point and laugh at me for stating something obvious. But oh well, here goes nothin'...

For those who just start the game, you'll be presented with a character creation screen (Mass Effect, anyone?) and of course, make your character. The race and class you select will determine your character's 'Origin' story, and may or may not trigger other quests, dialogue, or etc. later on in the game. In the end, though, all of the origin stories bring you right back to the main quest and timeline.

I'm not one to describe the entire story of a game in my reviews, so I'll get to the main part of the story. The main antagonists of the storyline are the Darkspawn, a horde of Demon-like creatures, led by a dragon-like 'Archdemon.' The horde of Darkspawn are rising up from underground, invading and attacking those on the surface. Your character becomes one of the Gray Wardens, who are those that are chosen to fight against the Darkspawn. All of the Origins stories will eventually merge into this main storyline.

In order to become a Gray Warden, you're given a mission of sorts. The mission, which asks that you retrieve treaties signed by other races swearing their allegiance in fighting against the Darkspawn, will later become a primary mission. After a series of events that happen afterward (such as a giant battle, a near-death experience, and a million tutorial popups), you see how the treaties fall into the story, as you're given a task of recruiting allies to fight against the Darkspawn. This makes up for a great deal of the story.

Throughout the game, you'll be encountering people you can recruit as teammates to use in your party, and there are several (I believe I recruited a total of 10 or so in my playthrough) of different combat specialties and talents, offering a customizable play-style. There's also a great deal of interaction between themselves (and you), and even other characters, even to the point where there will be unique dialogue options if you have a certain character in the party at a certain time, and those may affect something later on in the game. Some of the party members will even be romance options, provided you don't make them hate you.

Since I've explained the story, and the last paragraph was a good chunk of my gameplay segment of the review, I should probably get to the review part, haha...

Graphics: 4/5 or 4.5/5
Dragon Age uses a newly designed engine. It's nothing spectacularly different, although it looks nice. Not much more to say about the engine in general. Faces and character models look great, but there isn't a ton of variety between them. The models aren't really generic, it's just that when there's so many NPCs in the game, you're bound to run into a semi-recycled character model sooner or later. It's forgivable, though. The big problem I had with graphics was the performance problems, which I'll explain later.

Gameplay: 4/5 or 4.5/5
I'll state and explain one of the cons of the game before I go into any more details: THE GAME IS FREAKIN' DIFFICULT. I wouldn't be surprised if I hit F5 to quick-save more than I hit right click to do... everything else. Originally, even EASY difficulty was proving to be a bit hard for some people. When combined with the initially difficult combat and control scheme, it's more than enough to make some people throw down their controllers (or keyboard and mouse in my situation) in frustration. I will admit, though, it does get a bit easier later on in the game, partially due to the player slowly getting the hang of the combat.

For that, though, I believe it deserves a bit of an explanation on combat.It's almost RTS-style. In a one vs. one fight, initially, it comes down to right clicking on an enemy and waiting until one of you fall over dead. Later on, though (and by later on, I mean an hour into the game), you'll find out that doesn't work all of the time. When you've got more than one enemy attacking, and more than one person in the party, you have to plan out your battle a little. The space button pauses the game and lets you select tactics for your party, or individual members. THAT'S the part that takes the longest to learn how to use. If you just right click on an enemy to attack, unless you select the whole party, your character will probably be the only one attacking that particular enemy. It's this kind of combat scheme that requires careful reading of the manual (and a good deal of trial and error) to understand.


I honestly can't say I used some of the applied tactics in game, such as trap or poison making or stealth. My party usually consisted of 3 melee/heavy attackers and one mage/healer in the background, constantly healing people. The AI is a bit dumb, though, at times, sometimes refusing to heal (although in the game's defense, I learned later that it was partially do to me not setting the proper tactic for my healer, so when my health was under 25%, they'd heal) or gulping down every health or magic potion in your inventory, even when not needed. It's extremely frustrating, though, to see one party member blindly RUSH OFF INTO A SWARM OF ENEMIES, and then, while his/her health is going down by the chunks, TAKE ONE OF EVERY KIND OF HEALTH POTION YOU HAVE, and still die. And this is a common occurrence, unless you set your party to only move when you tell them to.

Eventually, though, in about 4+ hours of gameplay, most people should warm up a bit to the controls, and start to actually be able to progress without dying 10 times a minute (I, sadly, wasn't one of those).

Sound: 4.5/5 or 5/5
The composer for Dragon Age is Inon Zur, who is primarily known for his works for the soundtrack of the Crysis series, and Fallout 3 (although he does some other video game work as well). The music is great, and what you'd expect for a mid evil RPG. The combat music changes from calm music to more ominous music when you enter combat, and vice-versa when you leave combat, something I first noticed in The Elders Scrolls IV: Oblivion.

As for voices, as I said, the dialogue is great. The characters are well-acted and actually express emotions when the story calls for them. The big bummer for me (being a big Mass Effect fan) is that the main character (the one you create and primarily play as) doesn't have a dialogue voice. You choose your dialogue options and the conversation progresses as if you said something.

Although, the variety in dialogue, and moral choices make up for this, and all-in-all, sound is still great.

The game's system requirements are moderately high, recommending an 8800GT and a quad-core for its recommended requirements. I tried running it on a dual-core before switching back to a quad-core (though I should mention that Dragon Age wasn't the reason I switched back) and it ran fine. Something that surprised me, though, was a 100% CPU usage report when I alt-tabbed out of the game. A bug, maybe? It didn't seem to hurt anything, so I didn't think much of it.

Something I noticed when playing for several hours at a time, was a 'performance degradation', so to speak. The longer I played, the seemingly longer the loading times got, sometimes reaching up to over one minute (with a quad-core, 4GB RAM, a GTX 260, and a high-speed HDD, that's strange), and the framerates dipped randomly in-game. There were also some infrequent crashes mid-game (four or five throughout the 50 hours I played, maybe?) and half the time, the game would crash when I exited, although on the latter occasion, gameplay data was saved, so it was fine.

Performance issues aside, though, with the specs mentioned two sentences above this one, it ran great on highest settings, at 1440x900.

For me, someone who is primarily an FPS or RTS player, an RPG essentially built for the PC from the ground up is a break from ordinary. I believe that may be the reason it was so hard for me to get the hang of the controls and combat system, but it was definitely an enjoyable experience.

The game practically begs for a second play-through, just for the sake of a different play-style, or different dialogue options, or even just for fun. Online/LAN Co-op play would have made this game almost perfect, but it's not a big slap in the face not being included, and the DLC included with NEW copies of the game (Same concept as the Flashback Map Pack with Gears of War 2. You get a code with DLC) make up for it and then some.

All-in-all, it's definitely something I can recommend to someone who is a big RPG fan, and has the system specs to meet the requirements (as well as someone who is patient in learning a game they haven't played before).