The third in the series is another GREAT Dragon Warrior title! Put on your wizard hat and shield of valor for an epic RPG on the NES. 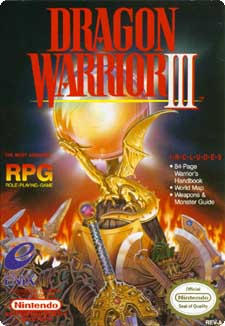 Dragon Warrior 3 is the third game of Enix's very popular series of Dragon Warrior. In this one, you are the son of Ortega, a brave soul who goes out to rid the world of Baramos. Your father falls into a volcano after a gruesome fight and you are looking to follow in Ortega's footsteps. Starting at the castle town of Aliahan, you are sent off by the king and on your way after stopping to recruit allies to form a party of four. There are a variety of classes to choose from being: Soldiers, Pilgrims, Wizards, Fighters, Merchants, and Goof-offs. The game does give you some default members, but the names are dumb and they only offer the Soldier, Pilgrim and Wizard. Besides, it would be a lot more interesting to pick and choose classes, genders and names for yourself, wouldn't it?

It's basically got the same look of the previous two land-wise, but the characters look unique. The battles are just still frames of enemies with a black background, flashing used to show damage. Like almost every RPG, when you equip something, the appearance doesn't change, except when the Revealing Swimsuit, Magic Bikini or Animal Suit is put on someone. The towns people are just reused sprites, some identical to the second, only with a nice color change. Still, the game has some good points, a big variety of enemies and tables, chairs, dressers now litter houses, giving it a feeling of modernization over the past two, even though this is supposed to take place before the first one. Players will observe distinct differences between male and female class members. It's a definite improvement over the last two.

I personally like the battle music and such. There is a new soundtrack from the other two, though it does play a cool version of Dragon Warrior 1's overworld music.

This is the real strong factor, leaving us all crawling back for more: Gaining levels up and hunting for items are the key to passing the game, with lot's of time focused on nothing more than gaining levels up,. Still, this game challenges you from start to finish. You must search for the three keys, get back a crown, explore a pyramid, rescue a kidnapped couple, track down a ship and a legendary bird for travel, give birth to a new town and more! I don't want to blow anything, but this game is a Prequel to DW1 so you will see some familiar stuff at some point. (NOTE: this is the last game in the first Dragon Warrior TRILOGY since the series works off of trilogies [DW1-3, DW4-6, DW7-9, etc.] ).

This is MUCH longer than the last two, taking many hours of play, which is what a Dragon Warrior game is for, and the third one is no exception at all! First off, making your own preferred party is a big plus, since it makes the game much more interesting. Discovering the talents of different classes and discovering the ability to change classes makes the quest unique. If you uncover the special Sage class , consider yourself of having a key ally! This is not a wham-bam- thank you mam kind of game at all. There is so many things to do at once, you never run out of things to pursue. There is always a goal to work for, from getting off of Aliahan's continent, to tracking down the six orbs to free the phoexix, Ramia, to take your party to Baramos. There are a wide variety of caves, castles and puzzles to keep up the interest. It does begin with only one goal at a time, but after you improve yourself, you got a whole world to deal with. Now you have to feel sorry for poor Ortega, look at all the things going on!

If you haven't read it already: You will play this over and over again! It's that good.

This is one heck of a game that is enough to keep you going for a long time. This is one for the history books of the NES, and one of my personal "Top 3" Dragon Warrior (Quest) games ever.
Review Page Hits: 2 today (772 total)
mediahook