The "Final Fantasy killer" series (well, in Japan at least

). None-the-less, a great game that spawned a great series! 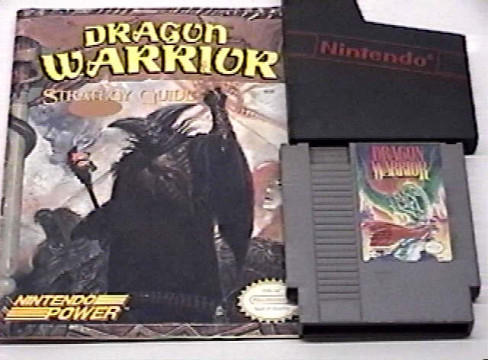 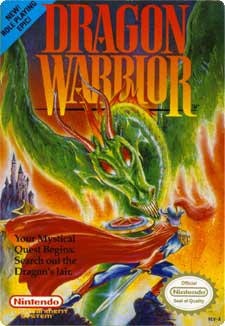 Ahhh, the mother of all NES RPGs, Dragon Warrior. Many of us remember cutting our RPG teeth on this fantastic game.This is one of those games that comes along every once in a while and causes millions of gamers to spend some very late nights. Dragon Warrior is one of those games you'll never forget (well, unless you don't like RPGs). I'm sure many gamers know what I'm talking about. This game also spawned a series of sequels, many of which we saw over here, well all of the NES ones anyway. Only problem is that we got each game like a year or two after it came out in Japan.

Now a lot of people may shoot me down for the high mark. But if you take a look at a lot of the really old NES games (85-88), the graphics were all kind of hurting. It wasn't until later that game designers learned to better utilize the NES' hardware. So keep in mind that this rating is relative to the really old games.

The graphics in this game are actually pretty good if you can get past the blockiness of the overworld sprites. The monsters are rendered rather well and for the amount of space this game took and the limitations of memory at the time, I think they did a pretty good job. One thing I should mention is the dungeons. Dragon Warrior has always been kind of weak in the dungeon graphics department. It's basically the same big sprite used throughout the whole dungeon. Pretty redundant stuff. Other than that, nice looking game for an rpg.

Dragon Warrior music. I don't think there's another NES game that had catchier music. I still hum the little tunes in my head and the opening theme to Dragon Warrior is one of the most recognizable of all NES games. All of the music is composed by Koichi Sugiyama, a very famous Japanese composer. The pieces he wrote are excellent examples of counterpoint melody. I even play some parts on my nylon string classical guitar. What's even more fascinating is that he was able to compose such great little melodies within the confines of the NES' limited audio capabilities. Very talented indeed. The music on the overworld suits it perfectly. It's great wandering music. The town music has a very lively atmosphere, again perfect. The dungeon music is great! Especially when you're making the final journey through Charlock castle and you're running out of MP and your hit points are getting lower and you know you're getting close, and if you can just make it a bit farther without another one of those armored knights attacking you...and all along the eerie music is playing in the background. The music just makes you sit on edge. I can't remember how many times my heart felt like it was going to leap out of my chest. I'd have to say that Dragon Warrior has the best music of any RPG, and possible any Nintendo game for that matter.

Again, I'm rating this relative to other NES RPGs. Being the first Dragon Warrior, it lacked somewhat in challenge. The designers simply didn't spend as much time creating obstacles for you as they did in the later games. There isn't really a ton of things to do in order to complete this game. No where near as much as compared to, say, Dragon Warrior 4. The one area where there's lots to do are the building levels. Now, there is something to be said for patience, but after walking around the same area for five hours just to build up enough experience to get to the next level, you begin to feel that the programmers perhaps could have made the levels a bit easier to reach (especially the higher ones), but I digress. I still have fond memories of sitting there for a whole afternoon with my cousin. We'd have two TV's in my room, and a plate full of sandwiches. One TV would have regular TV, and the other would have Dragon Warrior. We'd take alternating half hour shifts of level building, then a half hour of cheesy 80's cartoons. I guess the grandeur of playing Dragon Warrior hadn't worn off yet. However, if you're playing the game today just to catch up on what you missed and play the game that started it all, you may find yourself turned off by the intense level building. It's just part of being an RPG gamer.

This game is very rewarding. Well, at least it was when I was like ten years old. It was very fun during its time. Dragon warrior is still a very playable game that old timers like myself still like to reminisce about, and even toss in the NES every once in a while for a trip down memory lane. It also retains its sense of fun and adventure even after all of these years. Newer gamers (of course I'm overlooking the fact than many new gamers will probably never play this game anyway) will find plenty of fun and will reap the rewards of long hours of play if they invest a good amount of time and really get into the game. It may feel slow at times, but that's simply the nature of the beast. It's a game that requires a lot of patience.

There's two things that will probably frustrate players. One is the amount of time that it takes to build levels. Gamers may find themselves too lazy to put in that extra couple of hours to build up those levels. Here's a tip if you're using an emulator to run it: put the frameskip up really high and blast through those enemies. Another is the fact that some of the harder dungeons may frustrate players that don't have maps. Well, you can rough it, or if you spend the time, you can find maps to some of the dungeons on the internet. If you subscribed to Nintendo Power very early on, you may have received a Dragon Warrior strategy guide. If memory serves, it had maps to most of the dungeons.

While Dragon Warrior shines the first time around, it may be a while before you want to play this one again. The sheer amount of time it takes to beat this game is a major factor. I find I go back to this game every three to four years. The game is pretty linear and there's basically nothing you can do to deviate from the set game plan. It's not like newer RPGs where there's a million other things you can do the next time you play the game. Once you beat Dragon Warrior, well, you've seen just about everything there is to see in this game. The only reason for replaying this is for nostalgia.

Well, it was worth the $50 or so I paid ten years ago and It's worth the $5 you can find it for today. Even at that expensive price back then, it lasted a lot longer than many other NES games I wasted my Christmas gifts on. If you've never played this game and have an old NES kicking around, and happen to see this game in a pawn shop or something, by all means buy it. It's a good investment in some old school RPG fun. And at that price, who could go wrong?

The mother of all RPGs can still hold her own today. It has all of the classic elements, building blocks you may say, of many new RPGs. It was one of those classics who had few, if any rivals (the only one that comes to mind is Final Fantasy). It stood out like a sore thumb in the play-five-minutes-and-you're-bored games that lined most of the shelves in those days. It was actually worth the amount of money they were charging for cartridges back then. It's what got me interested in RPGs and taught me the value of hard work. It prompted world peace and saved pet cats from burning buildings. Well, okay, maybe not, but it is a great classic that influenced many gamers and first turned them on to RPGs.
Review Page Hits: 0 today (399 total)
mediahook