THE Baseball Game for the NGPC! 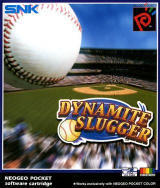 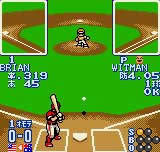 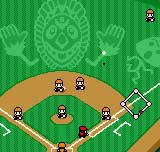 Dynamite slugger explodes onto the Neo Geo Pocket Color with style and substance!


Gameplay & Control
This is a very deep baseball game, yet the game is easy to pick up and play. You can customize the games to how many innings and extra innings there are, the ability to call the game, and have errors on. At the beginning you can choose from 12 different countries to play, each with their own specific stadium. There are domes and outdoor parks with the wind playing a factor on the ball.

From the get-go there are four modes to choose from, the first being Exhibition. In Exhibition you can play either against the computer or link with another NGPC to play against a friend. You can even use your custom teams and players against a human opponent that you can create in the Edit Mode. Next is Tournament Mode where its winner moves on in the field of 8 teams. Finally there's the Pennant Race. You choose from 15, 30, 60, or 160 games to play in the season and which teams you will be in the race with.

Though the characters are fiction, each has its own skill set adding deep strategy in building and using a team to the game. During gameplay, the stats for both the batter and hitter are shown. You can call a timeout at any time and, depending on whether you're at bat or pitching, you can change to a pitch hitter or various pitchers like in real baseball. When at bat or pitching, there are boxes in the upper corners so you always have a view of the first and third bases as well as second directly behind you.

The controls are set up well. You can move your pitcher left or right before throwing the ball, and you can also move the ball after its thrown before it gets to the batter. Same with the batter, you can move him left or right before the throw as well. When you are running bases you use the A button to advance the runner(s) and the B button to bring them back. The outfielders are controlled as one, so if one goes to the right they all move to the right. When you throw the ball back to the infield you simply use the analog stick to throw to the player you want. However, sometimes this doesn't work the best. The only other complaint would be that the outfielders run too slow sometimes.


Graphics & Sound
The graphics look rather nice on the NGPC. The players and stadiums are nicely detailed especially when close up. When close up, you can see how detailed the batters are. However, the players from a wide field shot look very generic. Each part of the game has a specific music to go with it including menus and during a game. When there's a full count or about to be a strikeout the music becomes more urgent than normal, a really nice touch in the sound.


Replay Value
There is a lot of replay value here simply with all the modes. Even though all the modes are basically just baseball games, the game is fun enough that it isn't a problem. Editing players and teams will also increase the longevity of play just to try out different methods of create players. However, it would have been nice to have some mini games like a home run contest.


Portable baseball games have a knack for not being very good or fun but Dynamite Slugger is a gem. For any baseball or sports fan this is a must buy, but any NGPC owner should pick this game up. The shear amount to do is enough to keep coming back and the game is just simply fun to play.
Review Page Hits: 3 today (1,195 total)
mediahook