Absolutely not the worst game ever made, and a few fixes could have made it enjoyable. 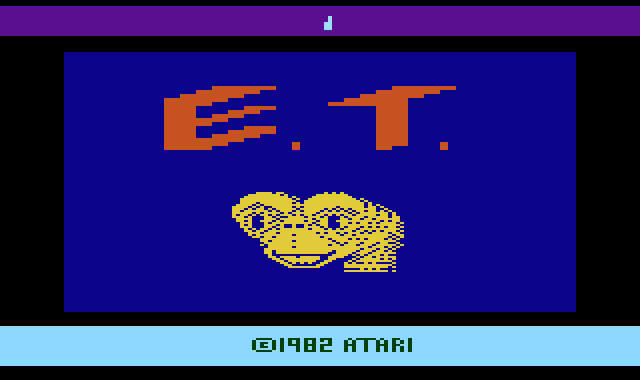 E.T.: The Extra-Terrestrial for the Atari 2600 has a well-established reputation as one of the worst games ever made. While I won't claim that it isn't deeply flawed, I don't think it deserves quite so much hatred. I could name several games off the top of my head I'd choose E.T. over.

Back when Atari was king and everyone and their third cousin was cranking out games for the 2600, there was a lot of godawful crap put on the shelves. Much of this came from third-party developers who were often literally a guy banging away at a computer in his garage, hoping to make a quick buck from the video game craze. But Atari themselves were not guiltless, especially when it came to games based on movie licenses. They shelled out massive bucks for the right to make an E.T. video game, and then gave poor Howard Scott Warshaw only about a month and a half to code it so it'd be in stores in time for Christmas. Atari were convinced that the title alone would be enough to make this game a hit.

Well, enough backstory. Let's take a look at the game.

I see a lot of negative reviews for Atari games that call the graphics "bad, even for the time." E.T. is no exception to this, and nearly every review I've seen or read pans the graphics in this game as being terrible. I sometimes wonder just how many Atari 2600 games these reviewers have played, because while E.T.'s backgrounds are lackluster-to-nonexistent, the character sprites are far better than most games on the system. Remember Haunted House? I don't see many people claiming that as having bad graphics, and your character is literally a pair of eyeballs floating around the screen. Adventure had us playing as a dashing, heroic... square. As programmers became more acquainted with the quirks and limitations of the hardware, they learned tricks to make the character sprites look better, and E.T.'s sprites rank among the best in my opinion. If you've seen the movie, you'll immediately recognize E.T. himself, as well as Elliott... not because the manual tells you that's who they are, but because they're recognizable in and of themselves.

The controls are fairly satisfactory, even though they're not intuitive. If you don't have the manual handy, it's easy to be confused about what you're supposed to do. Such is life when all you've got to work with is a joystick and a single button, I suppose. If anything, this game was a bit too ambitious for the hardware it was running on.

Gameplay is often maddening, and as far as I can tell it comes down to a single error in judgement--the hitbox. If any part of E.T. comes in contact with any part of a hole, E.T. will fall into the hole. This makes it all too easy to fall right back into the hole you've just climbed out of. Had E.T.'s feet been the trigger area to fall into a hole, the entire experience would have been so much more enjoyable. Once you've figured out why you keep falling in, though, it's possible (although still not much fun) to work around it.

Even having the manual at your disposal isn't necessarily enough to clue you in completely. The scoring listed in the instructions is flat-out wrong... although the scoring within the game is consistent, it doesn't match what you're told in the manual. It's been a while since I took a look at it, but I think there may be some other minor points where the manual was wrong, too. A complex game with incorrect instructions is a recipe for customer dissatisfaction, so it's no surprise that Atari's customers were displeased.

BUT. Having beaten E.T. several times myself--once in the late 80s and a few times in the 90s--I can say with authority that the game is ultimately intelligible, and it can be completed. E.T.'s very ambitiousness, while proving to be a hindrance to its execution, also gave it a depth that many games of the period didn't have. The fact that it had a distinct win condition also set it apart from most contemporary games. I have played a tweaked version of the game which fixed the collision detection and some other bugs, and I really do believe that this version of the game would have pleased audiences back in Atari's heyday. I also believe that if HSW had had the resources, it's the version he would have released. And I also also believe that even with these flaws, E.T. can't seriously be called the worst game ever made. It is a game, it is functional, and it can be played and completed. That's more than can be said of some others.
Review Page Hits: 0 today (696 total)
mediahook