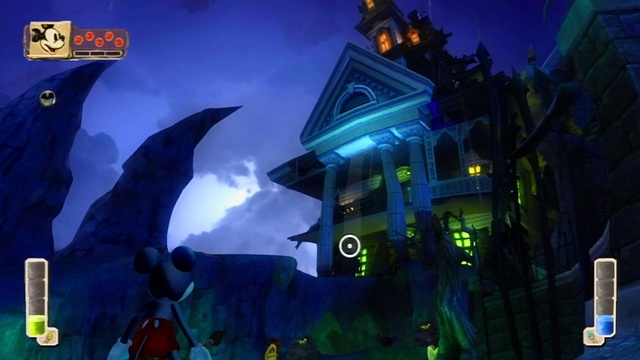 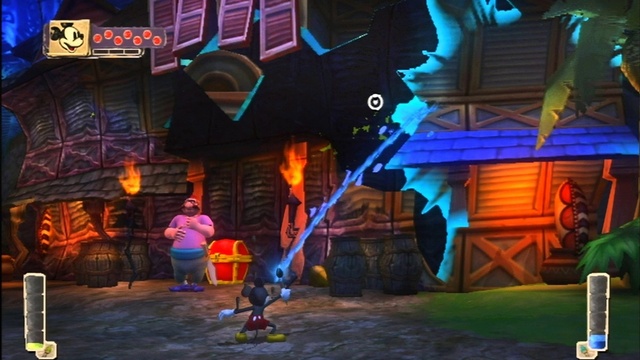 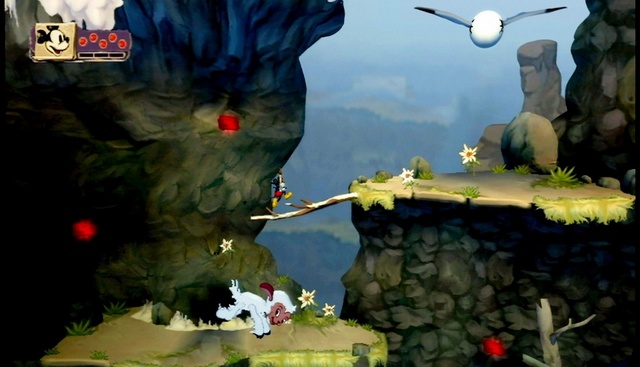 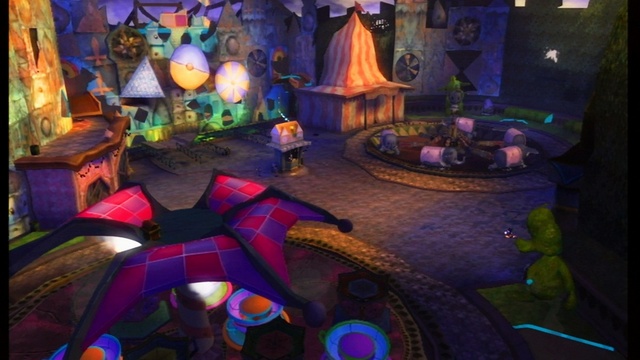 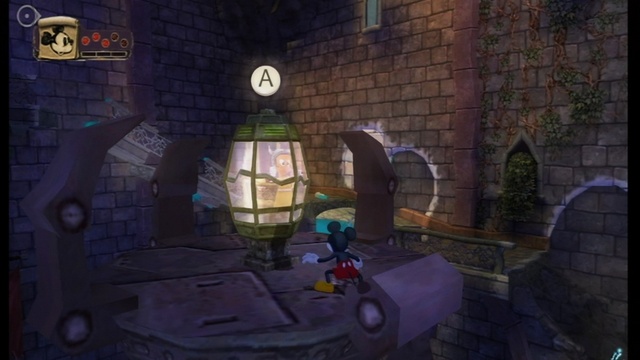 Disney is synonymous with family-friendly characters such as Goofy, Donald, and of course, Mickey Mouse. In pop culture, Disney's mouse is still as popular as ever, but in the video game industry, Mickey has few cameos outside of the Kingdom Hearts series of games. Disney and Junction Point are looking to change that with the release of the Wii-exclusive Disney Epic Mickey. In an industry where dull, brown and gray shooters are the catch of the day and draw in both kids who shouldn't be playing M-rated games in the first place and adults, does a 3D platformer still have enough pull to draw in a grand crowd?

Epic Mickey begins with our hero being awoken in his bed by the sounds of sorcerer Yen Sid's magic. The magician spends his time painting over what appears to be a theme park as Mickey hides just out of his sight. When Yen Sid leaves, Mickey cannot help but try his hand at painting. He picks up the brush, dips it in the azure liquid, and begins painting over the figurines and buildings of the park. When Yen Sid hears a commotion coming from his lair, he begins to march toward Mickey's location. Knowing this, Mickey quickly attempts to return everything back to order, but in his rush to exit he knocks over a bottle of thinner into the model of the park. The mouse moves back through the mirror and into his room. Days, weeks, and months pass until one evening a giant blob's hand grabs Mickey, pulls him through the mirror, and jerks him into the model of the theme park. Mickey must right his wrong and help the forgotten characters of Walt Disney including Walt's first big creation, Oswald the Rabbit, who doesn't take kindly to Mickey at first. The story is told through beautifully rendered 2D animated cutscenes that each look like works of art.

Epic Mickey is a three-dimensional platformer that has the player running, [double] jumping, spinning to knock enemies away and to gain more air from a jump via a flick of the Wii remote a la Super Mario Galaxy, and using painter and thinner to create and remove platforms and other objects for Mickey to traverse upon. The game is controlled with the Wii remote and nunchuk. By using thinner on certain platforms by pointing at the screen and holding down the Z button on the nunchuk, obstacles and walls that stand in Mickey's way are removed. With paint (used by also pointing at the screen but this time pressing B on the Wii remote), Mickey can color in translucent platforms and objects and use them to his benefit.

Epic Mickey's formula has Mickey going through various 3D areas connected by 2D platforming segments. Through entering Mickey's past cartoons like Steamboat Willie, Fantasia, Thru the Mirror, The Mad Doctor, and Jungle Rhythm, you jump and traverse through fairly short 2D segments. In each cartoon there is a hidden film reel to nab located in either a precarious position or a secret location. These can be viewed in the extras menu of the game and can also be traded for bonuses by the character in front of the movie theater of Mean Street, the main hub of the game.

Meanwhile, the 3D sections have characters of note that give Mickey quests to accomplish, most mandatory to move on, but some are in fact optional. These can be as simple as finding a way across a pool of hazardous thinner to repairing a ride with paint. Optional quests such as finding all of the parts of an animatronic Goofy, Daisy, and Donald Duck add to the fun. The only problem with these is that once you leave an area in the game, most of the time you are unable to return back to it. Since the game autosaves after each area and after completing quests and seeing certain events, once the game saves, you can't go back and retry an area unless you beat the game and start the New Game+ feature. This makes missing special items such as secret pins from beating quests and finding them in treasure chests (there's over 100 to collect), parts of the animatronic trio, behind-the-scenes content, and film reels very easy to accomplish. And when you do backtrack to a previously visited area such as the hub world of Epic Mickey, Main Street (where you can accept side quests, buy goodies with E-tickets like health upgrades, item upgrades, and other helpful things), you have to play through the connecting 2D level over and over again. This is quite annoying and time-consuming.

Then there is the camera which is a pain to deal with. It can get caught on objects, stuck in a specific direction, and just act all wonky in general. Yes, you can control it occasionally with the Wii remote's d-pad or call the camera behind Mickey with a press of the C button, but it doesn't always work. If the game has the camera programmed to be in a certain spot, you cannot control the camera at all. I can't say it caused me many deaths, but it did mess up plenty of jumps.

Moving on from the camera, at certain times in Mickey's adventure, you'll come up against junction points. These are pivotal moments in Epic Mickey where you'll have to choose between performing one action over another. One example is when you are facing off against a robotic Captain Hook. You can choose to battle and beat Hook or save Peter Pan's fairy who is trapped at the top of the pirate ship. Not only does your choice affect what happens short-term, but it also affects the story at the conclusion of the game and what ending you receive. To see the best endings, you'll have to play through Epic Mickey at least three times total, and as the game takes at least fifteen hours to beat, you'll be playing this game for a long time if you so desire.

Mickey's Wii platformer is a particularly dark game, and I don't mean in tone. Most areas are devoid of bright colors and look quite forlorn, a result of Mickey's mess-up with the jug of thinner. This can make some levels difficult to actually see. Environments themselves are interesting enough to look at and have intriguing geometry. Textures aren't too shabby, but the Wii has seen much better. Characters animate well, especially Mickey who waves his paintbrush around proudly. On the sound side of the game, Epic Mickey has a sensational, whimsical score that will most likely stay with you long after you turn off your Wii. Character voices are well done, even though the only speaking part is by Yen Sid in the opening cutscene. Otherwise, characters just grunt and holler. All in all, the presentation is pretty nice.

Epic Mickey is a valiant effort by Junction Point, but it suffers from the inability to revisit old areas to collect forgotten items. If you want to get 100% in this game, you will have to be extremely careful to gather everything before you leave a given area as the autosave feature is both nice and damning at the same time. While the platforming is decent enough, the camera is PlayStation One-era awful on some occasions. Meanwhile, the presentation is fair for the hardware, but after seeing the brilliant concept art for this game, it's a shame the developers chose the incapable Wii to place their vision on. The graphics just do not do the art justice. Regardless, if you are in the mood for an above average platforming romp that for once doesn't star a portly plumber, Disney Epic Mickey might make for an enjoyable ride.
Review Page Hits: 0 today (203 total)
mediahook