The Eye of Judgment (PlayStation 3)

The "Eye" brings the battle to LIFE 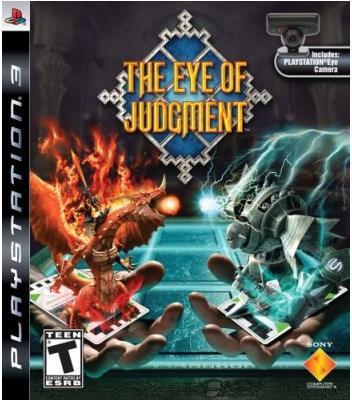 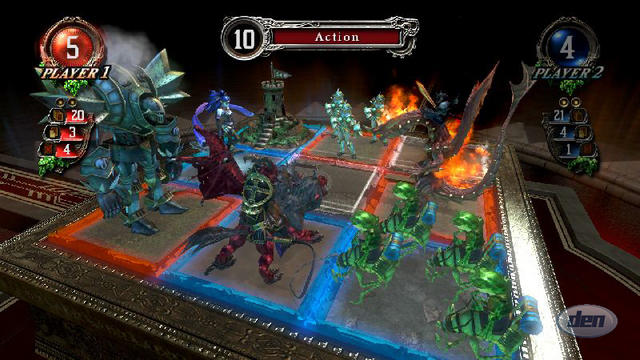 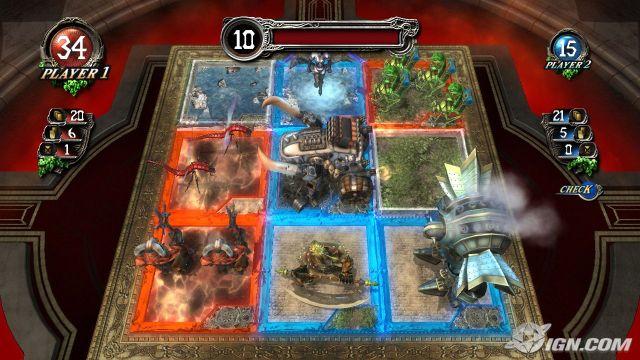 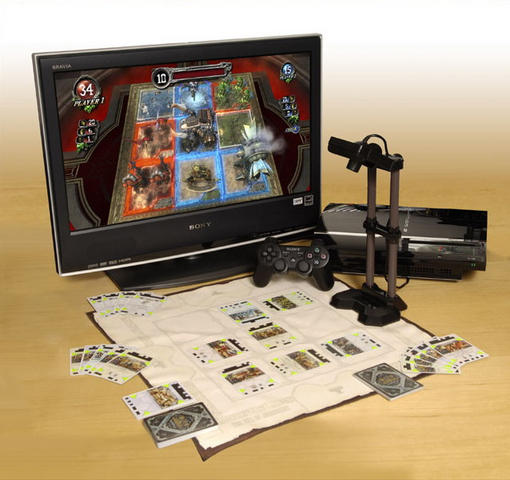 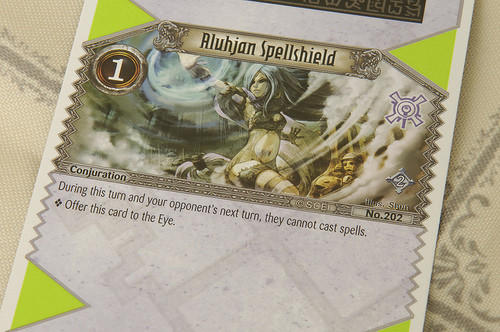 A strategy game that combines the power of the PS3 and the technology of the PS Eye. Sony, Hasboro and Wizards of the coast team up to bring you Eye of Judgment.

While unwrapping your Eye of Judgment bundle, you will find:

Eye of Judgment is a card-based strategy game. You set up the game mat as your battlefield. There is 3 game modes - Online, against the CPU or head to head with a friend in your home. When you start a game you will need to have a deck made up of 30 cards. There is two types of cards; creature cards and spell cards. Each creature card has an element as well; Fire, Water, Earth, Wood, Biolith, and Neutral. There's also other information on the cards such as, abilities, race, affiliation, rarity, hit points, attack/defense pattern, summoning cost, and so on.

On the mat there is 9 fields, each having an element type assigned to them. These assigned spots are always the same. The object of the game is to be the 1st to claim 5 of the 9 fields. Cards can gain a bonus or suffer a penalty depending on where you place them. If you have a fire card for instance, placing it on a fire field will gain you a bonus of +2 HP. Placing it on a water field will penalize you with -2 HP. Placing fire anywhere else has no effect, no bonus or penalty. If using a water card, the same applies when placing it on fire or water, one gains a bonus and one penalizes.

Earth and wood have friction with one another as well, but are neutral to fire and water. Biolith and Neutral cards don't gain any bonuses or suffer any penalties no matter where they are placed.

At the start of the game the CPU draws 5 cards for you. Both players take turns. Each turn a card is drawn and you are given 2 mana. Mana is like your action points. Each card costs a certain amount, ranging from only 1 mana up to 8 or even higher.

Aside from claiming 5 of the 9 fields, you can also win by attacking your opponents hand (discard), or by deck out. Decking out happens when the game goes on for so long that somebody may run out of cards. If it becomes your turn and you have no more cards to be drawn, your opponent wins by library defeat.

You attack your opponent by placing a card next to one of their cards. Cards that are attacked will counter attack. Magic casting cards can attack from afar and receive no retaliation attack. Some cards have attack patterns that arch, they can also attack from afar by shooting attacks over 2 squares, but can not attack directly adjacent to them. Most cards have a blind spot too, usually located on their back, and when attacked they will receive 1 extra point of damage, and in most cases can't counter attack unless their specific defense pattern (only very few cards) allows them to retaliate.

There is many abilities that cards carry in this game. I will name a few for example:

Quickness - A card with this ability will be the 1st to strike when being attacked. (only melee attacks)
Dodge - A card with dodge has a 50% chance of dodging a melee attack. Dodge attempts are cumulative too. If you have two dodge attempts on the card, you have a 75% chance of dodging. Perfect Dodge - Cards with this ability can't be hit at all with melee attacks, all melee attacks will miss. Protection - Cards with protection will have a reduction in damage. If a card has 1 protection point, and is attacked for 2 points, they will only receive 1 damage point. This ability is also cumulative.
Discard - Causes opponent to discard a card from their hand. In some cases it could be more than 1 card. If opponent runs out of cards and can not discard anymore, it results in a loss.
Incarnation - A card must be sacrificed, cards with incarnation can be brought into the game in place of the sacrificed card. Invisibility - Card is invisible and can take no damage from melee or magic attacks.

Visually the game is pleasing. Character designs and details, landscapes and backgrounds and so on, are great. The animations are really fun to watch and well done. Its pretty amazing that when you place a card down on the mat, the PS Eye recognizes it and your character is animated on the screen. The art on the cards are top quality too.

This game has a huge learning curve. I could even say that the learning curve in this game is never-ending, and I will explain why in a minute. All you really need to get started though, is just learn the basics of the game. You just need to learn how everything functions. The basics in this game take a little getting used to, that is why I rated the learning curve a " B- ", because there is a lot you must know in order to play the game properly. But this game isn't as difficult as it sounds.

The never-ending part of the learning curve, is that even though you are playing the same game you don't get the same opponent each time. Playing as a beginner or novice, you may stick to one style or strategy, as you become more familiar with the game you may try out other strategies, sometimes it is necessary in order to beat new opponents. Opponents have different play styles and strategies, sometimes you get strategies thrown at you that you may have never played against. Win or lose, you always learn something. So many different combinations are possible in this game, some you have not even thought of yet, but they are there.

I'd say the replay value is pretty good in Eye of Judgment. You can basically play anytime. Sometimes you may play so much you may even take a break from it, but you will be back to play again. Also, they have been releasing expansions for the game, so there is much more to play.

As you can see, Eye of Judgment is a vast strategy game. It is also expensive. Initial cost isn't so much, but buying booster packs can cost you $4 a piece and boxes of 36 packs can cost in a range of $80-$100. You can do like I did, and join an Eye of Judgment community forum. You can join in on discussion about the game, trade cards, participate in tournaments and leagues and more. Whether you want to play casual or hardcore, it's up to you. Have fun