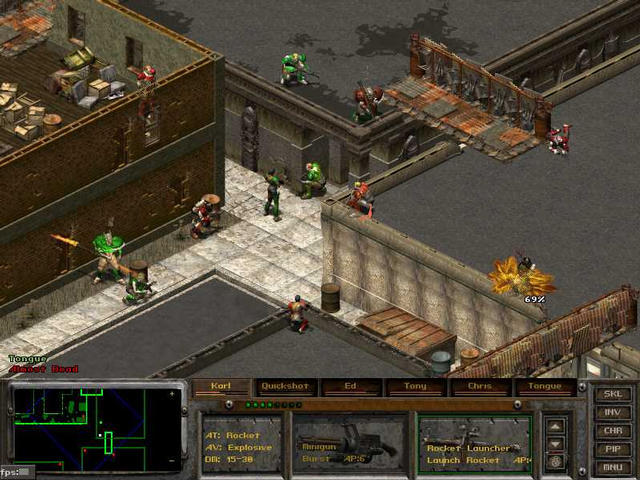 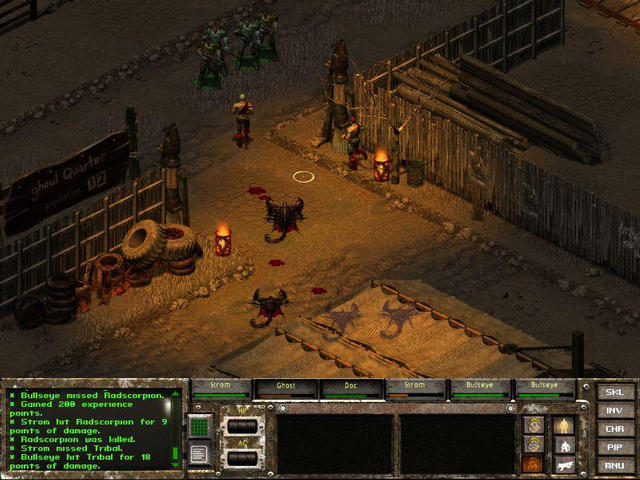 This is more or less the 3rd installment of the Fallout series, which I believe to be one of the best game series to date. It takes place between the first game and the second game. The first two games were for the most part RPG games, but Tactics takes the Fallout world into combat strategy style of gameplay. But, there is still a very interesting story line as well going on during the game, and it is not just shoot em up.

It is a very big game and lots to do. There are 20 missions that will test your ability to manage and keep alive a squad of Brotherhood rookies. You start with 3 in your squad. As the game progresses, you can have up to 6 in your squad. This can include medics, snipers, gun experts, demolition experts, drivers, mechanics and so forth.

You had one vehicle in Fallout 2. Many players wanted more vehicles, and guess what? The game makers heard their cry because there are more vehicles in Tactics. In fact, that is one of the best features of Tactics: the ability to control and use vehicles. They are such cool "rides"! Of course, they are military type vehicles, but they are still fun to use. I know my sadistic side will come out here, but I just loved running people over, and you can do that in this game. If I remember correctly, there is a Humvee, a tank, a Armored Personnel Carrier (APC), a Scout, a Nuke Carrier, and a bike (special one). The only downside about the vehicles is that you only get to use them in the missions that you find them. But they are still worth it, because they make travel in the world map quicker, and you do get to use them in any random encounters you have on the world map.

Some of the different races you fight and can eventually recruit into the Brotherhood ranks include mutants, ghouls, humanoid robots, reavers, death-claws, raiders, and even dogs of war.

It helps if you have played Fallout and Fallout 2, because then you will be familiar with how you manage weapons, skills, and attributes. Plus, you'll understand about traits and perks, and just how the Fallout world works in general. But, have no fear, because there is a tutorial mission in Tactics if you have never played the Fallout games. So, it is possible to be able to play the game and have never played any of the other ones.

There is also a multi-player option in the game for those who like that stuff. But, believe me, the single player campaign will keep you plenty busy. The first time I played it, it took me nearly a month to get thru it, playing almost every day.

And yes, it is a type of game that can be played again and again. It is a game that you can find something new in it every time you play it; something that you might have missed before.

So over all, I was very impressed with Fallout Tactics and would highly recommend it to any gamer wanting to be triumphant in a post nuclear world. It will keep you entertained.