It's Fatal Fury... but this series was not meant to be 3D. Much like Street Fighter, play this game in its true form, 2D. 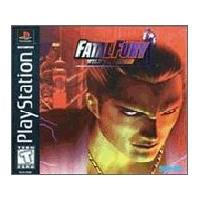 Fatal Fury Wild Ambition is actually a port of the game for the Neo Geo Hyper 64 (SNK's 3D arcade board, which only had a few games), rather than a game developed specifically for the PlayStation. That aside here we go.

For those who are not familiar with the Fatal Fury series, it was originally made BEFORE Street Fighter 2. It was developed in 1990 on the Neo*Geo hardware, but wasn't released until 1991, once Street Fighter 2 hit the arcades. So ideally, SNK released it to compete with the popular Capcom series. Anyhow, this version was released on SNK's second board, the Neo Geo Hyper 64. It featured 3D graphics, as opposed to the 16-bit Neo*Geo. Fatal Fury Wild Ambition attempts to retell the story of the original Fatal Fury, only in a 3D aspect.

Fatal Fury was a 2D game and it should have stayed that way. Of course, its not like the 3D mode does anything to this game. It's still nearly identical to playing a 2D Fatal Fury, which in my opinion isn't half bad. However, Tekken or Dead or Alive fans will hate this game with a passion. Don't expect anything like Dead or Alive or Tekken here, you get Virtua Fighter looking characters who play like they are in a 2D game. The Fatal Fury series was always a pseudo-3D game. It was the only fighting game in its time to feature mulitple planes of movement, allowing the players character to jump from the foreground to the background and visca-versa. Anyway, this game rarely even has that.

Graphically, the characters resemble the original Virtua Fighter (i.e. very blocky). However, they are large enough on the screen to keep yours eyes entertained, and to distract you from the horrible backgrounds. The backgrounds are completely unanimated, which is a shame. The first time you move your character, you can clearly see the 2D backdrop, creating a cheap, Tekken style effect (hehe). However, certain special moves such as Geese's Raising Storm look great, where as Terry Bogard's Power Wave looks like a pixel-filled block of fire.

The sound is not impressive either. It is fun hearing the announcer pronounce Xiangfei, which even I cannot do, so I'll give them credit for that. The in-game sound effects are just awful though. Easily the worst out of any PSX game. They sound washed up and just terrible. The music, however, is quite decent (as in all SNK games), and when turned up loud enough, can sometimes block out those terrible sound effects.

The games control sceme is passable, very similar to Real Bout Fatal Fury for the Neo*Geo. It plays just like a 2D fighter, which is what Fatal Fury is (not this version of course), and I'm not complaining. Special moves are easy to pull off and link into combos, but as in all SNK games, the computer opponents become quite cheap.

Fatal Fury fans will most likely be disappointed with Fatal Fury Wild Ambition, mainly because it's a disappointing 3D game. 3D fighting fans of Virtua Fighter or Tekken will absolutely hate it. Rent this game if you're a casual fan. Buy it now if you're a collector because it's rather rare, as SNK is now out of business in America and all products were shipped back to Japan. If you like it keep it, if you don't sell it for a profit! I found it as enjoyable as I could for a 3D fighting game (I am a 2D gamer at heart), but still at that, the game remains a nothing but average, weak, 3D fighting game.
Review Page Hits: 1 today (214 total)
mediahook