IGN users give this game a 1.9/10 lol
Amazon
Metacritic

I came into this game expecting a crappy TV show to game conversion, but the mediocre game that this is surprised me. 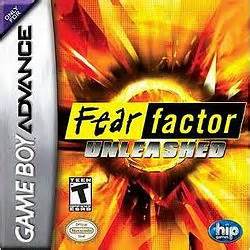 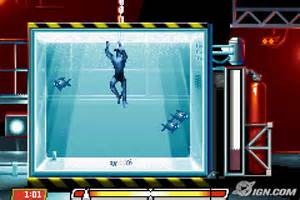 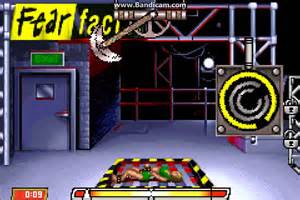 I bought this for VERY cheap, so I wasn't expecting anything at all. I mean, $1 brand new? Someone had to give it away instead of opening it as well, meaning it had to be really bad, right? So I opened it, put it into my GBA, and started it up, expecting pure piles of garbage.

Then I played the game.

The game has a few modes, including Fear Factor, custom, and practice. The games menus allow you to circle around, which is a tiny but nice touch for me. The modes are not very different from each other. Fear Factor is (probably I've watched like 2 episodes) like the show, where if you fail the stunt or do the worst (get the lowest score or highest time), you are eliminated as well. The goal is then to be the last person out of 6 people. You also need to beat easy mode to unlock medium, and medium to unlock hard. This feels forced instead of fun. So as you start playing the game (on easy mode of course), you play one random stunt. The stunts themselves consist of things like gross-out challenges, go-kart racing on a high platform, escaping a pit and pendulum by lock-picking, and a few more. Although there aren't many of these stunts, they are fun while they last, but then you need to watch everyone else do it! It is a big ruining factor for this game. You can skip through the AI's turn, but it still takes a while, and that times 5? Really makes it hard to go through. So you go on to the second challenge, and unless you lose, you go on to the third. For me, these are the best challenges. They include go-karting, flying a helicopter, and dodging obstacles on a jet ski. These are very good while they last, but not for long, as each minigame only takes about a minute, less if you fail, meaning that an entire game is around 5-10 minutes long.

Another one of the main mechanics is while playing is that you have to press the L and R buttons to balance your fear meter. If it goes to far to one side you scream in terror and fail. It is really challenging, although most of that comes from trying to multitask and look at both halves of the screen at once. This can just get REALLY annoying after awhile.

There are a couple other modes, which are custom and practice. Custom has multiple options for you to make your own version of the game, such as choosing between normal or Vegas mode. In Vegas mode you bet money that you can beat a stunt and at the end whoever has the most money wins. You can also decide which of the 12 stunts you want to do, and in what order. This is definitely a nice touch to freshen up the game for a while, but it still doesn't make a mediocre game not mediocre. It seems like this mode is the only attempt to save the game from being completely bad, and it worked to some extent. There is also practice mode where you can practice individual stunts to get better at them. If you like a certain stunt, you can do it as many times as you want.

There is also multiplayer via the GBA link. I don't get why they didn't just have you take turns on a single system instead of on multiple systems. It really makes no sense, making what could have been a good multiplayer mode feel like another rushed mode in a game that serves no purpose.

Don't get me wrong, this game can be fun, but with only 12 minigames it is gonna wear off REAL fast. With no good multiplayer, taking turns that result in the game being boring, bad visuals, the entire main mode being 10 minutes long, and the fact that this game just could have been so much more all leave a bad taste in your mouth. This game could have been a GREAT game full of minigames, and the potential shows, but it just falls short everywhere. So instead of being a fun, lovable game for your GBA, it feels like shovelware that will be in bargain bins everywhere. So, considering all of this, the game deserves a D+ and a TRY HARDER sticker. I expected nothing, and it worked, but anyone who expects a good game will be sorely disappointed in this budget title.
Review Page Hits: 0 today (452 total)
mediahook