The first (North American) Final Fantasy holds up as one of the better turn based RPG grinders from the 8 bit era. 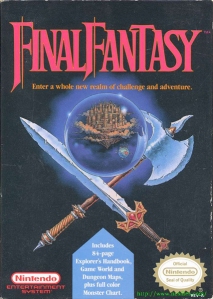 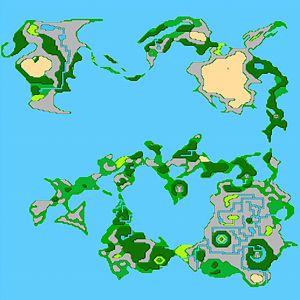 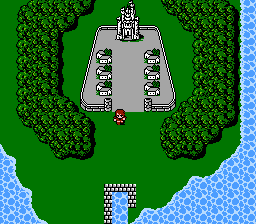 Ah... Final Fantasy. I'm not sure how I first heard about Final Fantasy but I remember that I got very pale one summer because I spent it indoors playing this game over and over again. I finished this game 5 times in the first four months I owned it. Since beginning my collection a few years back I have played it twice more again. It holds up as one of my favorite turn based RPG's of the 8 bit era.

The plot seems fairly standard but one should realize that the storyline was fairly unique for the time it came out. I'm not talking about the save the princess part, or the give me the CRYSTAL part and I give you the HERB part... The overarching story of being trapped in a time loop was incredibly unique and I only appreciated it fully after I got a bit older.

The basic storyline is that you are part of the Light Warriors and your mission is to make the Orbs shine again. This involves destroying the 4 fiends that have 'taken over' the four elements of Earth, Fire, Water and Air. The story does get a little more complex than this later but I leave that for you to discover.

The characters, while boring in terms of storyline, are well thought out in terms of gameplay. You have 6 character types you can choose from; Fighter, Black Belt, Thief, Red Mage, White Mage and Black Mage... all with strengths and weaknesses. You can pick four characters to form your party and they can be any combination of these 6 types (I don't recommend the Thief as there is nothing unique about the character other than it can use ONE certain weapon later in the game).

Once the party is picked, weapons, armor and magic need to be purchased for all of the adventurers. This is an aspect of gameplay that made it easy to immerse yourself into Final Fantasy... While a lot of RPG's need the player to determine stats, abilities, hit points, etc, Final Fantasy removes the need to do this by having these increase by fairly standard amounts as the character's level rises. The involvement of the player becomes focused on purchasing the right balance of weapons, armor and magic for defense and offense. Some would argue that RPG's are about being involved in the determining how stats get dispersed, but any old RPG'er out there knows that there is a line that gets crossed pretty fast... too much involvement slows down gameplay and thus interest drops off quickly as well.

The music is catchy and interesting, if a little too pronounced at times that would call for some quieter and softer approaches in the music category. The sound effects are notably not present in the game. Other than a pathetic 'hit' sound and the sound of the airship there is not much going on in terms of sound effects. And do yourself a favor; when you need to buy a lot of heals, pures, or anything else, turn down the volume on the tv as the sound effect for every menu change is incredibly annoying and it may have caused me permanent sanity issues.

This is not a hard game unless the player tries to do things too early. Unfortunately there are some exceedingly long grind areas. For example is Elfland, you come across on the boat maybe level 3 or 4 and NEED to gain a number (5 I think?) of levels before moving on to the Marsh Cave... the only other way to do it early is to run away from battles and this doesn't always work. This to me is one of the legendary grind areas... all of the players of FF have spent time here and hope a Ogre and Creeps show up instead of the Arachnids which poison you and force you to buy pures or go get one...

The other long grind area is before the Fire Cave and Ice Cave. The boss of these caves is not so bad but without some levels behind you and some decent equipment, the fire fields in the Fire Cave will suck you dry and the sorcerers in the Ice Cave will decimate you.
Outside of the negative grinds the gameplay actually moves along very well, with some typical sub plots that we have all played before in other games as well as some unique ideas for mini quests (and larger quests) that we hadn't seen before FF.

The world is exceptionally large for an older RPG. It takes you worldwide on this remarkably under populated planet. The travel between areas has been very well thought out by limiting you to particular areas for a time until some artifacts have been discovered that allows you to travel wherever you like. This helps to reduce grind issues with the game. Instead of having to travel long distances over ground you have covered before and the monsters do not offer good experience or money, later in the game you can go where you want very quickly to grind wherever you choose. Yes the grind is still there but by allowing you to select 'where' you grind the game feels more immersive and open.

The problem with the limiting movement until later in the game is that it actually makes the game surprisingly linear throughout the first half. You can only go to one or two specific locations at most for most of the game before a new area or quest is open to you. This doesn't make the game any less fun but new gamers used to not having limitations on where you go and what you do may take issue with this.

Final Fantasy stands out as a childhood favorite of mine. It set a bar that I still measure other games against. While it certainly has its failings and issues, it works as an immersive experience which I will always say is the most important aspect of any video game, but particularly RPG's.
Review Page Hits: 0 today (184 total)
mediahook